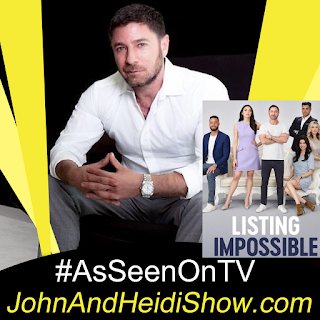 Today we talk with top-ranked L.A. real estate agent, Aaron Kirman ….Aaron is one of the leading real estate agents in the USA and has repeatedly been named Top Agent in Los Angeles. With over 5 Billion in sales, Kirman represents the finest estates across the globe and was ranked #11 in the U.S by the Wall Street Journal. He has an extensive client base featuring those who seek the luxury lifestyle including heads of industry, celebrities, royalty, major lending institutions and foreign investors. As a prominent figure in the luxury real estate market, Kirman has received International acclaim for record setting sales across Los Angeles. He is featured in the new CNBC original series, “Listing Impossible”

In a survey, 63% of dog owners said that including their pet in their profile photo helped them find success matching with others online.

THIS IS YOUR BRAIN ON DRUGS: Brought to you by TimeForRehab.com!
Each day we share stories about people doing dumb things under the influence, but ADDICTION IS NO LAUGHING MATTER! If you or someone you know needs help, we're here! Learn more at TimeForRehab.com.
Officials in Lake Worth say he has been taken into police custody on more than three-dozen other occasions, now a North Texas man is facing charges after being arrested for the 40th time. According to police, suspect Terry Hodges had been pulled over for a traffic violation when officers became suspicious that he might be engaging in more serious criminal activity. Hodges consented to having his car searched and shortly after officers allegedly found a bag, hidden next to the battery, containing 1/2 ounce of crystal meth. Several counterfeit $100 bills were also found during the search. The 44-year-old is now facing a number of charges, including felony drug possession. (https://cbsloc.al/2tL5Yh6)

Paramount Pictures canceled a planned Mission Impossible 7 shoot in Venice, Italy, this week due to concerns about the worldwide spread of the coronavirus.

Kylie Jenner is battling with a New Orleans clothing company over the trademark rights to her daughter Stormi’s name. (https://pge.sx/2wuminq)

Disney on Thursday unveiled an animatronic version of The Child, also known as Baby Yoda. The toy, now available for pre-order, retails for $59.99. Touching the top of Baby Yoda's head activates over 25 sound and motion combinations, including happy and excited sounds, giggles, babbles, and more, all while the toy’s head moves up and down, ears move back and forth, and eyes open and close. https://amzn.to/2urnure

While most of us will stop to pick up a penny, many people are also willing to throw them away.

Kanye West has purchased a second ranch in the small town of Cody, Wyoming and is said to be building a warehouse for his fashion company there.
(https://nyti.ms/2HNNWhB)

Put a guy in a dental chair, and he turns into a wimp. In a survey, 49 percent of dentists said males are more anxious when it comes to dental appointments, while only 15 percent thought females were the scaredy-cats.

The first iPhone wasn't made by Apple. The first mobile device to be called an "iPhone" was made by Cisco, not Apple. It allowed the user to use the voice functions of Skype without a computer. Apple announced its own product just 22 days later, and Cisco sued for trademark infringement. The lawsuit was ultimately settled out of court and both companies were allowed to keep using the name. However, you've probably never heard of the Cisco iPhone.

Do you love the distinctive smell of McDonald’s so much you would actually want the scent of one of its burgers wafting in your home? Well, the fast food giant has a product just for you. As part of its Quarter Pounder Fan Club, McDonald’s is listing a set of six scented candles on their official merchandise website based on the ingredients of the burger – 100% fresh beef, sesame seed bun, ketchup, pickles, cheese, and onions. “Burn together for maximum deliciousness,” the site suggests. The fan club site adds the candles are not available to order just yet, and there are limited quantities. (https://bit.ly/2HTmnmY)

MOMENT OF DUH: Brought to you by SingleStudentLoan.com
A 33-year-old Michigan woman is facing multiple felony charges after police say she fired a shot inside a Flint Taco Bell after becoming upset over her order not being filled. Officers with the Flint Police Department responded shortly after 2:00 a.m. Saturday, February 15th to Taco Bell for trouble with a customer. An employee told police that a woman -- identified by police as 33-year-old Brittani Felton -- was in the drive-thru and upset about her order. Felton then displayed a purple handgun and fired one shot that hit the building, but it did not strike anyone. She then fled the scene. Surveillance video from the restaurant was used to assist detectives with identifying the suspect and her vehicle. Felton was later arrested by police. She was arraigned on February 22nd in Genesee District Court on two counts each of assault with intent to murder and felony firearm. (https://bit.ly/2VnOUsV)


FAKE NEWS.... OR FLORIDA?!
I read a headline and Heidi (and you) need to guess if the story is FAKE NEWS or something that really happened in the state of FLORIDA.
A Cape Coral man did a cartwheel during a DUI stop and begged the cops to take him to jail ….. FLORIDA (https://bit.ly/2NFvr10)

Boy Bullied For His Love Of Reading Gains Over 240,000 Followers On Instagram