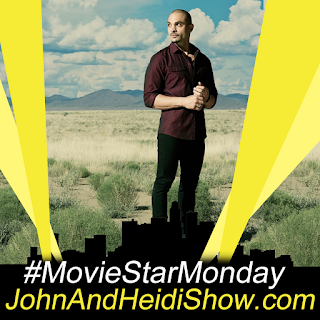 He also has a NEW SONG - Wild One on YourTube

A Lottoland survey finds that 3 in 5 people plan on self-improving during the Coronavirus lockdown. (https://bit.ly/3bZBFUv)

THIS IS YOUR BRAIN ON DRUGS: Brought to you by TimeForRehab.com!
Each day we share stories about people doing dumb things under the influence, but ADDICTION IS NO LAUGHING MATTER! If you or someone you know needs help, we're here! Learn more at TimeForRehab.com.
An Australian driver who allegedly had a blood alcohol content four times the legal limit has lost his license after an Adelaide police patrol noticed a rose bush embedded in his car. The man's car was spotted at about 2:30 a.m. travelling north with its lights on high beam. Police followed the car and then noticed what they described as a “large ornamental rose bush” attached to the left side of the car. The car was then pulled over and the driver was breath tested. The 21-year-old from nearby Klemzig allegedly returned a reading of 0.209, more than four times the legal limit. He was reported for drink driving, lost his license for twelve months, and had his car impounded. (https://ab.co/34kRKkY)

A growing number of Hollywood studios are rushing new releases to streaming services because they can’t show them in theaters right now. So, a movie that would’ve come out in theaters this week can be rented for $19.99. Which sounds expensive, but then again that’s what you’d pay for a popcorn and a soda if you went to the theater.(https://on.wsj.com/2JYettI)

The Nation’s Doctors are warning that smoking pot could make your lungs more susceptible to the Coronavirus.(https://yhoo.it/34o1BGU)

A 16-year-old pilot has been flying medical supplies to rural hospitals in Virginia.
(https://bit.ly/2RldOGI)

Dr. Ruth called the New York Post to say that parents should not argue in front of their kids during lockdown because it could give them anxiety. (https://pge.sx/3aPFJ9D)

R. Kelly was denied a bid to leave jail amid the Coronavirus pandemic.
(https://pge.sx/3aTVFI5)

The hot rumor in the publishing industry is that Carole Baskin from “Tiger King” has gotten offers to write a book. (https://bit.ly/2VhN6QI)

Drake is showing off his 50,000 square foot mansion in this month’s issue of Architectural Digest. (https://pge.sx/2JPDqYn)

The website for Prince Harry and Meghan Markle’s non-profit fund was hijacked and redirected to the video for “Gold Digger” by Kanye West. (https://pge.sx/3aXjLSd)

Most people break up on Mondays. Searching through public Facebook data, Lee Byron and David McCandless found that relationships statuses changed for the worse two weeks before Christmas, around Easter, and on Mondays. Though this data may be somewhat misleading, as people might not be live-updating their breakups, it shows an obvious trend.

Dateline.... MALAYSIA
The United Nations is warning that the Coronavirus could spark a devastating condom shortage. The true problem is that most of the rubber used for condoms comes from Malaysia and their factories have been closed since mid-March.
(https://yhoo.it/2VcMbAV)

Police reported that, in violation of a state order forcing the closure of nonessential businesses, an Ohio beauty salon was caught “sneaking in customers” to have their hair and nails done. Acting on a phone tip, cops in South Euclid, a Cleveland suburb, entered the Beauté Room Salon and found two females inside the business. The name of a third woman, a licensed cosmetologist, is also listed on a police report. Cops noted that they would report the matter to the state health department. In late-March, the cosmetologist named in the South Euclid Police Department report advertised her nail care services on Facebook, writing that she was prepared to “step out of quarantine” for old and new clients. In an April 6th post, the woman claimed that she was no longer booking appointments. She wrote, “Sorry but I tried, a few bad apples spoiled the bunch! I’m not about to sneak and risk my health, possibly getting fined for inconsiderate females.” (https://bit.ly/3a6baeQ)

A woman who arrived at Louis Armstrong International Airport in New Orleans with absolutely no clothing on was later arrested when she refused to leave the facility, according to the Jefferson Parish Sheriff's Office. 27-year-old Mariel Vergara of Pueblo, Colorado was completely nude when she walked into the airport and made her way to the Spirit Airlines ticket counter on Friday night, April 3rd. A deputy dispatched to the scene noted that Vergara had already put on a dress by the time he arrived. But she was still violating public decency laws because she had on no underwear, and the dress was too short to cover her genitals, the Sheriff's Office said. Airline officials told Vergara she wouldn't be able to travel due to her attire -- or lack thereof. She was asked to leave the airport, but Vergara reportedly refused. Vergara ignored deputies' orders to leave the airport and scuffled with them as she was being taken into custody. She was arrested and booked with obscenity, resisting arrest, battery of a police officer, simple battery, and remaining in a place after being forbidden.
(https://bit.ly/3eimtnx)

FAKE NEWS.... OR FLORIDA?!
I read a headline, you guess if the story is something that really happened in the great state of FLORIDA or is it #FakeNews made up to trick you and amuse me
A Key West woman was charged with assault after she attacked an Easter Bunny who took a lunch break when her daughter was next in line for a photo. FAKE NEWS
GOOD NEWS: Brought to you by #GiftCardChallenge GiftCardChallenge.org