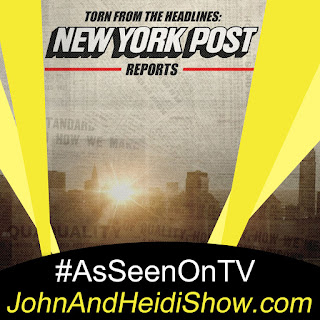 A study by New York University found that obesity is the single biggest factor in Coronavirus hospitalizations. (https://zd.net/2yjbDNa)

THIS IS YOUR BRAIN ON DRUGS: Brought to you by TimeForRehab.com!
Each day we share stories about people doing dumb things under the influence, but ADDICTION IS NO LAUGHING MATTER! If you or someone you know needs help, we're here! Learn more at TimeForRehab.com.
An Ohio man livestreamed a massive party while defiantly declaring “We don’t give a f–k about this Coronavirus” — only to be arrested over the weekend for flouting social-distancing rules. “This is how we do it in my city, man,” 25-year-old Rashaan Davis brags in the 11-minute video, shot Friday night in Cincinnati and later posted to YouTube. “We don’t give a f–k about this Coronavirus. This is how we celebrate our Coronavirus.” He was busted Saturday afternoon and charged with a misdemeanor for violating Governor Mike DeWine’s “stay at home” order amid the pandemic, according to a police report the authorities posted to Facebook. Cincinnati police recommended a high bond — or none at all — until Davis can appear before a judge because of his “complete disregard for public safety.” YouTube commenters also blasted Davis and the other revelers. (https://bit.ly/3c87hrb)

Carole Baskin says she feels betrayed by the producers of “Tiger King” because she thought the documentary would focus on cat rescues. (https://bit.ly/2XwHKUr)

Joel McHale is being slammed for his “Tiger King After Show” that was released on Netflix Sunday Night. (https://dcdr.me/2yPjUZB)

Major Airlines are cutting back flights by 90% this summer because of flyers leery of catching the Coronavirus. (https://bit.ly/2Rr2WXW)

Facial Recognition Software is struggling to identify Americans who wear masks during the Coronavirus crisis.

A study by NYU found that the Coronavirus may have been spreading in New York City months before anyone realized it. (https://bit.ly/2yRl9I1O)

A Connecticut teenager was arrested for “Zoom Bombing” an online class and disrupting the teacher’s lesson. He’s facing six years in prison. (https://bit.ly/2Xmf6Fh)

Aviation Authorities have received dozens of reports of a cigar shaped object flying over the Nebraska sky. (https://bit.ly/2xkUyT9)

An Indian Couple has named their baby “Lockdown” after giving birth during the Coronavirus crisis. (https://bit.ly/2Rr8uBJ)

Adjusted data shows that far fewer people will die from the Coronavirus than initially expected. (https://cnn.it/39UEFQy)

FUN FACT FOR YOU:Share this with your friends... they'll think you're really smart!
Danes once bred a pig to look like the flag. In the early 20th century, those who resided in North Frisia under Prussian rule were not allowed to raise the Danish flag. But some crafty North Frisians took action by breeding a pig, known as the Danish Protest Pig, to be red in color, with a large white stripe around its belly—thus creating an animal version of the flag. As they technically did not break the law, and because it wouldn't have been feasible to ban the breeding of pigs, the Danes successfully protested Prussia.

Dateline.... SPAIN
A Spanish woman was arrested after she ripped her clothes off and jumped onto the roof of a police car following a court appearance.(https://bit.ly/2XxWJgE)

A man in California was arrested Monday, accused of assaulting his mother after a family dispute over toilet paper dramatically escalated. The Santa Clarita Valley Sheriff's station said on Twitter that deputies responded to a call where family members were arguing because one relative felt the other one hid toilet paper. “It turned into a physical confrontation,” police tweeted. “One got arrested.” In the weeks since the COVID-19 pandemic has spread, officials have discouraged hoarding supplies such as paper towels and toilet paper, which have been flying off the shelves in some stores. Deputies were called to the home around 3:00 a.m. when 26-year-old Adrian Yan accused his mother of hiding the family's toilet paper and an argument erupted, Shirley Miller of the Santa Clarita Valley Sheriff's Station told the City News Service. Yan then allegedly punched his mother, according to Miller. The 26-year-old was arrested for suspicion of battery. (https://fxn.ws/2yNIFFI)

According to Florida cops, after declaring that social distancing rules were “getting out of hand,” a customer yesterday “forcefully” coughed on a store cashier and said that he “goes up to people wearing masks and does the same thing to them.” Investigators allege that 49-year-old Christopher Canfora, a paramedic, intentionally coughed on an employee at a tool store near his home in DeBary. As described in a charging affidavit, he approached cashier Amanda Puig and commented on tape markers placed on the ground to ensure that patrons stayed six feet apart. The 21-year-old Puig told cops that Canfora remarked, “This is getting out of hand, this is why everywhere I go I cough behind everyone with a mask.” Canfora then allegedly coughed on Puig and “all over the register where he was standing.” Puig told police that “after coughing on her, he stated he was going to be on his way to do this again” at a Winn-Dixie supermarket. Using a store receipt for Canfora’s purchases, cops tracked the subject to his residence. After being placed under arrest, Canfora told cops he “did not expect anyone to understand his sense of humor, as he and his partner joke around at his work frequently.” (https://bit.ly/2yKWEfj)

FAKE NEWS.... OR FLORIDA?!
I read a headline, you guess if the story is something that really happened in the great state of FLORIDA or is it #FakeNews made up to trick you and amuse me
A Holiday man had his monkey taken away after police busted him for driving a stolen vehicle ….. FLORIDA (https://2wsb.tv/2Hdt7Oo)

Woman Marries The Man Who Saved Her Life During Las Vegas Shooting
https://www.sunnyskyz.com/good-news/3739/Woman-Marries-The-Man-Who-Saved-Her-Life-During-Las-Vegas-Shooting