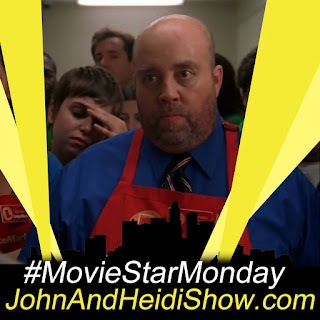 This #MovieStarMonday we visit with actor/voice talent, David H. Lawrence XVII who is doing the greater good by providing teachers a free video course on Zoom for teachers. David is providing this free resource to teachers because he wants to help them. One of the biggest challenges in hosting a Zoom call for teachers is preventing Zoom Bombers from entering the chat. His class “Teach Your Own Course” goes in depth on the steps to prevent hackers from entering chats. ( http://teachyourcourseonline.com/ )

The Cleveland native has been seen on FX's The People vs. OJ, TBS' Frank TV, CBS' legendary CSI, The Mentalist, their military thriller The Unit and served a month or so as the announcer on The Price is Right; he's appeared on FOX's Touch and The Finder, TBS' Raising The Bar, ABC's epic LOST, NBC's spy dramedy Chuck, the hit Disney Channel sitcoms Good Luck Charlie and A.N.T. Farm, and is best known for his breakout role as one of the Villains, puppet master Eric Doyle on NBC's smash hit Heroes. Lawrence also stars in new media as well, reprising the Doyle role as the lead in the PRODUCED BY Producer's Challenge winner Heroes: Nowhere Man, from NBC and Retrofit, and as a series regular on Subway's The 4 to 9ers on Hulu.

A study at the University of Pittsburgh found that music may be able to boost your immune system against the Coronavirus. (https://bit.ly/2VKB6ra)

THIS IS YOUR BRAIN ON DRUGS: Brought to you by TimeForRehab.com!
Each day we share stories about people doing dumb things under the influence, but ADDICTION IS NO LAUGHING MATTER! If you or someone you know needs help, we're here! Learn more at TimeForRehab.com.
A shameless freeloader quarantined himself in a shuttered Connecticut restaurant, helping himself to thousands of dollars’ worth of food and drink during a four-day bacchanalian binge. 42-year-old Louis Angel Ortiz was arrested early Tuesday after allegedly pillaging a Cuban restaurant in downtown New Haven, which police believe he busted into Saturday through a side window. Ortiz then proceeded to eat, drink, or steal several thousand dollars’ worth of food and booze, including roughly seventy bottles of liquor. Police said, “Officers learned Ortiz helped himself over the course of four days to the restaurant’s food, liquor and beer.” “In addition to eating and drinking at the restaurant, Ortiz removed beverages and property from the building,” officials added. Ortiz was taken into custody after a manager stopped by the closed restaurant and saw someone sleeping inside with a bottle of rum.
(https://bit.ly/34MIzdn)

The Lake Tahoe house featured in “The Godfather Part II” is on sale for $5.5 million dollars. (https://bit.ly/2VNdodZ)

“The Real Housewives of New Jersey” are organizing a supply drive for New Jersey hospitals. They sent 10,000 masks. (https://pge.sx/3ajb1EB)

A video of a pig that lead police on a 45-minute chase in Stamford, Connecticut has gone viral . Cops are still trying to figure out how the pig escaped. (https://bit.ly/2yq3p67)

The Hashtag “Florida Morons” is trending on Twitter after Miami Residents ignored lockdown orders and went to the beach.(http://dailym.ai/2zeFNBP)

Prince Harry and Meghan Markle cut ties to the UK Tabloids Monday saying they will no longer participate in interviews because of the inaccurate reporting about them. (https://pge.sx/34PHLEB)

In Nigeria, a woman was nabbed by a restaurant customer who said he saw her steal a phone from another diner. Police quizzed the woman without success and were about to let her go when someone suggested they call the phone. After dialing the number, they heard a sound coming from under the woman’s clothes and took her to jail.

Mila Kunis and Ashton Kutcher have announced the launch of a new quarantined themed wine they are selling to raise money for COVID-19 relief efforts. They will be donating 100 percent of whatever they make from the wine to charities and organizations that are helping to fight against the coroanvirus pandemic.

Beethoven could still hear after going deaf. Upon going deaf, Beethoven discovered that if he bit onto a metal pole that connected to the piano he was playing, he could hear almost perfectly well. This process is called bone conduction, and while technology has evolved, the science is the same: Vibrations are transferred from the conductive metal into our bones. When this happens, our ears pick up the signal with no sound distortion.

Dateline.... ENGLAND
A British court has shot down a bid by a 30-year-old woman to marry a 92-year-old chandelier. (https://bit.ly/3ailccV)

Wisconsin pizza delivery driver was injured during a robbery Tuesday morning, according to the Madison Police Department. Police say that the driver was flagged down by a man wearing a medical mask who appeared armed. The man demanded pizza and money. Police said the man slammed a car door on the driver as the driver reached into his car. Officials describe the robber as a man in his 20s around 5 feet, 11 inches with a medium build. The delivery driver said the man got into a blue sedan. The driver was not seriously hurt but was reportedly in pain while talking to officers. (https://bit.ly/34E4TWl)

Taneytown, Maryland is a small city located in the northwest corner of the state. According to the 2010 census, Taneytown has a population of 6,728. Now at least one of those 6,728 people is being called out. Tuesday night the Taneytown Police Department posted on social media reminding residents to put on pants before checking the mail. In its apparent final warning, the department also wrote: “You know who you are.” The post is on its way to becoming an internet sensation. In the first 12 hours after it was posted, the post was shared more than 1,500 times. (https://bit.ly/2KaB1HW)

FAKE NEWS.... OR FLORIDA?!
I read a headline, you guess if the story is something that really happened in the great state of FLORIDA or is it #FakeNews made up to trick you and amuse me
Police in Cocoa, Florida arrested a woman who shot her boyfriend because he was snoring too loudly ….. FLORIDA (https://bit.ly/2GLM6wX)
GOOD NEWS: Brought to you by #GiftCardChallenge GiftCardChallenge.org