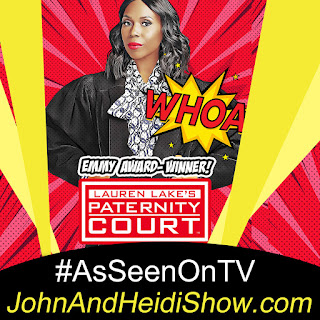 Today we visit with Judge Lauren Lake. She definitely took a different path to the courtroom then most. Though she has her law degree from Detroit’s Wayne University and is a member of the Michigan, New York and New Jersey state bars – Lauren started out as a professional singer & songwriter, performing back-up for Jay-Z, Mary J. Blige, P. Diddy, Dr. Dre and Snoop Dogg. She’s even an interior design expert who hosted HGTV’s Spice Up My Kitchen for six seasons. Today, Lauren presides over the nationally syndicated daytime courtroom series Lauren Lake’s Paternity Court, now in its seventh season. In the Emmy-nominated series, Judge Lauren oversees highly emotional family cases that lead to life-changing consequences. https://paternitycourt.tv/

Scientists at North Shore University Hospital are studying a head lice drug as a possible treatment for the Coronavirus.(https://bit.ly/2VbdxJ4)

THIS IS YOUR BRAIN ON DRUGS: Brought to you by TimeForRehab.com!
Each day we share stories about people doing dumb things under the influence, but ADDICTION IS NO LAUGHING MATTER! If you or someone you know needs help, we're here! Learn more at TimeForRehab.com.
Worried that her methamphetamine was contaminated, an Iowa woman drove to police headquarters and asked cops to check her stash for the Coronavirus. 53-year-old Shawn Salmen arrived at the Sioux City Police Department Sunday afternoon and reportedly admitted to officers that she recently used meth, which appeared obvious since the paranoid Salmen was sweating profusely and acting erratically. While speaking with police, Salmen “was requesting officers to check her narcotics for the COVID-19 Virus,” a criminal complaint states. During a subsequent pat down of Salmen and a search of her truck, cops recovered 14.4 grams of meth, marijuana, and “a large amount of drug paraphernalia.” Salmen, who lives in Sioux City, was arrested on a pair of felony narcotics charges and a misdemeanor pot possession count. She was released Tuesday from the Woodbury County jail after posting $25,000 bond. (https://bit.ly/2x8MBjY)

AMC Movie Theaters are said to be on the verge of bankruptcy.
(https://bit.ly/3aUzJwp)

A video of Naomi Watts having a meltdown after several of her appliances broke on the same day has gone viral . (https://pge.sx/3bUQvvs)

A growing number of TV Anchors are going pant-less as they broadcast from home during the Coronavirus. (https://bit.ly/2XiZ9Qb)

In a historic first caused by the Coronavirus, The Supreme Court is going to allow a live audio broadcast of their court session for six days in May.
(https://bit.ly/3elUoeK)

The U.S. Government is going to own 3% of American Airlines as part of the bailout deal being negotiated. (https://reut.rs/2xtTmwM)

A Virginia Pastor who recently held a packed Church service despite lockdown orders has died from the Coronavirus. (https://bit.ly/34BX2bT)

Amazon announced it will not accept new grocery delivery customers amid a spike in orders. (https://bit.ly/3cdcCgK)

A new survey found that 35% of people believe that working from home has harmed their mental health. (https://bit.ly/2RAjLjl)

A Federal Reserve study found that the U.S. could be facing eighteen months of rolling shut-downs until a Coronavirus Vaccine is approved. (https://bit.ly/2V6mGmc)

The New York City subway trains have become a homeless shelter with hundreds of people sleeping on the empty cars that continue to travel the city.
(https://cbsloc.al/2K1gntx)

The bear population has quadrupled at Yosemite National Park while it remains closed to the public. Just to be clear, this is not because of breeding. This is because of local animals who come into the park now that there are no cars driving around. NEXT YEAR’S population increase is a different story.
(https://bit.ly/3b7dEe8)

A new study found that the Coronavirus arrived in California in February.(https://bit.ly/3b424At)

A study by The Guardian found that Coronavirus lockdowns have improved the air quality in the world’s most polluted cities.(https://bit.ly/3ef0ttB)

An elaborate doomsday bunker has gone on sale for $18 million in Las Vegas.
(https://bit.ly/3eaDWy5)

Sweden is tightening its quarantine restrictions in an effort to stop the Coronavirus. (http://dailym.ai/2Xwb0L4)

Star Wars was expected to be a flop. The original 1977 Star Wars had a budget of $8 million, which distributor 20th Century Fox was reluctant to give to director/writer George Lucas, so he accepted a lower salary in order to keep the budget. The movie went on to make $775 million around the world, and Disney picked up the entire franchise for $4 billion. For comparison, Star Wars: The Last Jedi, which was released in 2017, had a reported budget of $317 million.

Nine tourists who broke the lockdown order in the Indian town of Rishikesh were forced by police to write “I Am Sorry” 500 times before they were released from custody.(https://yhoo.it/2xqUfpU)

Authorities say that a known Florida scammer is wanted by New Jersey authorities for allegedly calling in thousands of dollars’ worth of phony pizza orders in the state, claiming the food was being donated to the police. 34-year-old Sudeep Khetani, who is believed to be in Orlando, never paid for any of the orders that he placed at several Garden State pizzerias, including in South Brunswick, Montgomery, and Plainsboro. On several occasions when the restaurants called Khetani back, he bizarrely said he wished Italians would get infected with the Coronavirus. “It is incomprehensible that a suspect would play on the goodwill of so many during these difficult times,” said Chief Raymond Hayducka of the South Brunswick Township Police Department. Police were eventually able to identify Khetani through the fake phone number he used. New Jersey and Florida authorities are working together to track Khetani down. Police added that Khetani is on probation in the Sunshine State for selling fake Disney World tickets. (https://bit.ly/2V9FTmE)

A supermarket shopper was spotted appearing to wear underwear on her head as a makeshift coronavirus face mask. Jared Richter and his wife Jennifer had been food shopping at supermarket in Coconut Creek, Florida on Tuesday when they spotted the woman's quirky attempt at staying safe while buying her groceries. As she prepared to get out of the car, 44-year-old Jennifer “froze and started cracking up” after noticing the beige underwear stretched across the customer's head. The woman can be seen packing away her shopping and returned her trolley - completely unfazed by the couple staring at her from across the car park. Jared's video has now been viewed more than 35,000 times and attracted more than 380 reactions - as social media users laugh at another bizarre attempt to solve the face mask shortage. (http://dailym.ai/2JYPeY7)

FAKE NEWS.... OR FLORIDA?!
I read a headline, you guess if the story is something that really happened in the great state of FLORIDA or is it #FakeNews made up to trick you and amuse me
A Fort Pierce woman claimed the wind blew cocaine into her purse after being busted for drug possession ….. FLORIDA (https://bit.ly/2TfdxDp)