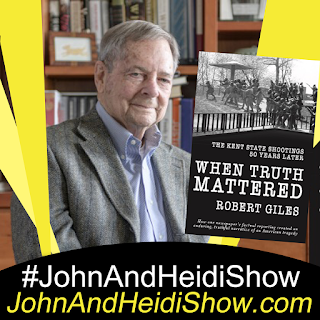 Today we talk with Bob Giles, Pulitzer Prize winner and author of WHEN TRUTH MATTERED: The Kent State Shootings 50 Years Later. This is an authoritative account of a young newspaper editor and his staff painstakingly pursuing the truth of the Kent State shootings on May 4, 1970, as we mark the 50th anniversary of the shootings. (https://amzn.to/3bSNhZl)

A study by Sleep Standards found that the coronavirus lockdown is affecting the sleep habits of 77% of people. (https://bit.ly/2VDD6S5)

THIS IS YOUR BRAIN ON DRUGS: Brought to you by TimeForRehab.com!
Each day we share stories about people doing dumb things under the influence, but ADDICTION IS NO LAUGHING MATTER! If you or someone you know needs help, we're here! Learn more at TimeForRehab.com.
Smugglers hid cocaine worth more than one million euros in a consignment of protective face masks. Officers found the 14kg haul in a Polish-registered van as it attempted to enter the UK through the Channel Tunnel. The driver, a 34-year-old Polish national, has been arrested. Ian Hanson, Border Force regional director, said it was “despicable” to think drug smugglers would try to exploit the Coronavirus situation. The face masks have been held pending checks by regulators, while the driver is being questioned in custody. Darren Herbert, from the National Crime Agency (NCA) Dover branch, said: “This seizure is further evidence of the way criminal networks are attempting to exploit the coronavirus outbreak to their own ends, covering this load of drugs with what would seem like vital protective equipment.” (https://bbc.in/3aj6vGk)

Richard Gere and wife Alejandra Silva have welcomed their second child together, a baby boy. Gere and Silva secretly tied the knot in early 2018 after dating for four years. He’s 70, she’s 37.

While Tiger King was a big hit for Netflix, it wasn’t the most-viewed program or movie in the first quarter of this year. That title goes to Spenser Confidential, a Netflix original film starring Mark Wahlberg. Netflix says Spenser was viewed 85 million times.

… Tiger King had 64 million views. Love is Blind came in third with 30 million.

… Netflix counts a household as having viewed a title if it was watched for at least two minutes. Regular TV has a different formula measured by Nielsen
SCOOP OF THE DAY: Brought to you by InsuranceChicken.com

Research shows that people who make their bed every day are more likely to sleep better.

Hopefully you’re comfortable wherever you’re sheltering in place, because a new study out of Harvard (T.H. Chan School of Public Health) says periods of social distancing may be necessary into 2022 to curb the spread of COVID-19.

Quarantined humans are passing the time playing games. The week of March 29, worldwide people downloaded over 1.2 billion mobile games, which is 50 percent higher than the typical weekly load. A survey of 3,000 gamers found that in the U.S., 70 percent said they were spending more time gaming, while 39 percent were spending more money.

Police in Massachusetts said a goat found wandering outside a liquor store was safely reunited with its owner. After getting the call, animal control found the goat curled up behind a UPS drop-off box, apparently confused and exhausted.

Last week Apple announced the new iPhone SE, a lower-cost iPhone that starts at $399. It has the same basic shape and look as the iPhone 8, which means it has a 4.7-inch screen. It is available for preorder this now

Stressed men have altered proclivities. A 2012 study published in the journal PLoS ONE found that men who are feeling stressed out prefer women with curvier figures. The study had one experimental group perform a stressful activity, while the other control group did not. Afterward, they were shown pictures of women with various body types. When the men in the control group were asked to rate the women on a scale of one to nine, they rated pictures of women with higher BMIs as the most attractive.

Dateline.... GERMANY
A passenger traveling on a train through Germany was caught by ticket inspectors using a driver’s license bearing the name and image of Russian President Vladimir Putin.

Florida cops needed two hours and multiple jackhammers to extricate a protester who’d jammed his arms inside a pair of concrete-filled 55-gallon barrels outside the Governor’s Mansion in Tallahassee on Friday. 28-year-old Jordan Mazurek, of Fort Worth, Texas, had trapped his arms inside the elaborately-rigged barrels to protest the state’s handling of prisoners during the Coronavirus outbreak. One of the barrels bore the words “Stop the massacre” in white painted lettering. The other read, “Free prisoners now.” Police told the outlet that they knew Mazurek had the ability to remove his arms from the length of PVC piping inside each barrel — because they had seen him do so to adjust his mask. But the barrels were designed to prevent his arms from being forcibly removed. Last month, officials at Florida’s Hillsborough County Jail sprung 164 detainees considered low-level offenders — including one man who allegedly murdered someone the day after his release. (https://bit.ly/34MHaU9)

A California man may face charges in Arizona for intentionally coughing on a gas pump handle while referencing the spread of Coronavirus. The man, identified only as a 23-year-old guy from Winterhaven, was questioned after cops in Yuma received reports of video circulating on social media Saturday showing the unsanitary deed. The suspect later admitted to coughing on the pump during an interview Sunday at the Yuma Police Department, Sergeant Lori Franklin said. “He came in willingly and did a full interview,” Franklin said. “He admitted to the fact that that was him on the video.” The man got the idea “from other social media videos” he’d previously seen on the internet, police said in a statement. “He blatantly coughed on the handle and said, ‘This is how you get Coronavirus,’” Franklin said of the footage, which was posted to Snapchat. Charges of unlawful use of infectious biological substance — a felony — will now be sent to Yuma County prosecutors for review. (https://bit.ly/39KgfJu)

FAKE NEWS.... OR FLORIDA?!
I read a headline, you guess if the story is something that really happened in the great state of FLORIDA or is it #FakeNews made up to trick you and amuse me
A Fort Walton Beach man was arrested for attacking a mattress because he claimed there was a man hiding inside of it ….. FLORIDA (https://bit.ly/2XSEXBS)
GOOD NEWS: Brought to you by #GiftCardChallenge GiftCardChallenge.org