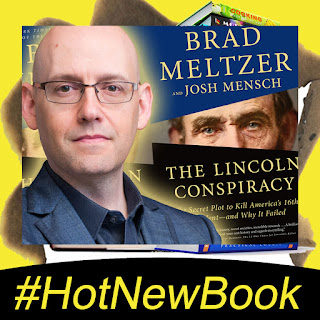 Today we visit with Brad Meltzer is the #1 New York Times bestselling author of The Escape Artist, The Inner Circle, and ten additional thrillers, and is the host of the History Channel TV shows Brad Meltzer’s Decoded and Brad Meltzer’s Lost History. His highly anticipated new book THE LINCOLN CONSPIRACY is the real-life story of a secret society that plotted to kill Abraham Lincoln right after he was elected. Thanks to the work of a famed detective and one of the first female private detectives in America, the assassination plot – which threatened to dramatically alter the course of American history -- was stopped.
AVAILABLE NOW

SURVEYS, STUDIES & SUCH: Brought to you by BetterCreditCards.com
A survey by Kelton Global found that 1 in 4 people are at a breaking point from being locked down. (https://bit.ly/2W2THie)

Two people were taken into custody after police said security cameras captured video of them breaking into Neyland Stadium just after midnight Monday. Dispatchers reported that five people were seen crawling under a hole in the fence near gate 22. When UTPD officers arrived, they said two people carrying 24 packs of beer were still inside the fence. One person admitted that an officer warned them it was a bad idea to break into the stadium because it is under 24-hour surveillance. Both Rachel Barber and Spencer Ngumuya reportedly admitted to officers they had stolen beer from the concession stand inside the stadium. Officers reported the stolen beer had a value of $624. Barber and Ngumuya were booked into the Knox County Detention Center on charges of burglary. https://www.wvlt.tv/content/news/Two-charged-with-breaking-into-Neyland-Stadium-stealing-beer-569975551.html
BIG SCREEN-LITTLE SCREEN: Brought to you by ChannelSurferTV.com
ABC Reporter Will Reeve continues to be mocked for being seen with no pants on during a broadcast from his home. (https://bit.ly/3f68UaQ)

During a segment on Tuesday’s Good Morning America, reporter Will Reeve was doing a story from his home office. When GMA reduced the size of its graphics banner at the bottom of the screen it was revealed that Reeve — the son of late actor Christopher Reeve — was without pants. Reeve later tweeted: “I have ARRIVED* … *in the most hilariously mortifying way possible.”
https://twitter.com/ReeveWill/status/1255141549450473473

Felicity Huffman’s daughter, Sophia Macy, has gotten into Carnegie Mellon University all by herself, just one year after her mom was busted in the college admissions scandal. (https://yhoo.it/2yb19Qu)

You think all those adults on TikTok are there because they love TikTok? Nope. These are merely parents engaged in covert operations. A study suggests that over half of parents who sign up for new social media services do so to spy on their kids.

A Tik Tok account called “BIG BABY” has gone viral after viewers became obsessed with a 43-inch toddler who still looks like a baby. (https://bit.ly/35iaTVk)

A study says that children allowed to watch R-rated movies are more likely to start drinking at an early age.

A group of Homeless Activists were arrested after they camped out at the Ritz-Carlton hotel in Los Angeles to protest the city’s handling of the Coronavirus. They’re facing a $1,000 fine. (https://yhoo.it/2W0783N)

The Pentagon has declassified three UFO Videos that were shot by Navy Pilots in 2004 and 2015. (https://cbsn.ws/3cU3r5d)

The CDC is recommending social distancing for pets after a small number of animals tested positive for the Coronavirus. (https://bit.ly/2YiSTsf)

Undercover cops in Texas arrested two women who were operating private beauty salons in their houses. The hair stylists are looking at six months in jail.
(https://bit.ly/2VJTi5d)

Sharks existed before trees. Trees are young'ns compared to the geezer sharks that rule the sea. Sharks have existed for around 400 million years, while trees became their own official species only 350 million years ago. Other notable animals that outlive our leafy ancestors are the horseshoe crab as well as the jellyfish.

Dateline.... SPAINA Spanish news anchor was caught cheating after a half naked woman was seen in the background of his home broadcast. (https://bit.ly/2zD1VGb)

More than a year after former big leaguer Jose Canseco said he was looking for Bigfoot and UFOs, the eccentric slugger is worried they might have contracted Coronavirus. “Can Bigfoot or aliens get Coronavirus I need to know because I have had contact with them," Canseco tweeted over the weekend. Many on Twitter poked fun at the message, specifically mentioning that no one has ever seen the mythical Bigfoot. “Bigfoot is notoriously good at social distancing, I wouldn't worry about it,” one person wrote. “Jose you're supposed to keep 6 feet from ALL creatures even the nonexistent ones,” another person responded. This is not the first time Canseco, who has a long history of making wild and outlandish comments on Twitter, has tweeted about aliens and Bigfoot. In February 2019, he said he was launching a "Bigfoot and alien Excursion," however it's unknown if the trip ever took place. (https://fxn.ws/3d2aWY1)

After cops found a pair of firearms and a Kevlar vest in his SUV, a Florida Man disavowed ownership of the weapons, claiming he had sold the vehicle “to his cousin John Wick.” Responding early to a 9-1-1 call about a domestic violence incident, cops questioned 27-year-old Getro Gelin at his residence in Port St. Lucie. A woman told police that Gelin shoved her to the ground and threatened her with a firearm. After the victim said that Gelin may have hidden the gun in his Porsche SUV, cops searched the vehicle and recovered a Glock 21 pistol, a semi-automatic rifle, and a bulletproof vest. When asked about the guns in the auto, Gelin “replied he had sold the Porsche to his cousin John Wick.” Gelin subsequently “stated he lied about the name, but that he would not reveal his cousin’s name.” “John Wick” is the title character in a blood- and bullet-soaked movie franchise starring Keanu Reeves. Gelin was arrested for aggravated assault with a deadly weapon and domestic battery. (https://bit.ly/35kOkPO)

FAKE NEWS.... OR FLORIDA?!
I read a headline, you guess if the story is something that really happened in the great state of FLORIDA or is it #FakeNews made up to trick you and amuse me
A Flagler County man wearing only a speedo invited police to check out his marijuana plants ….. FLORIDA (https://on.wtsp.com/2LyNoBc)
GOOD NEWS: Brought to you by #GiftCardChallenge GiftCardChallenge.org