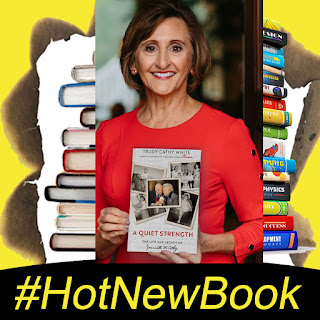 Today we visit with the daughter of the founder of Chick-fil-a, Trudy Cathy White. We will tak about her new book about her mother A Quiet Strength: The Life and Legacy of Jeannette M. Cathy, a first-hand look at her mother’s life, including growing up during the Great Depression with a struggling single mother, breaking tradition by attending both college and seminary as a woman in the 1940s, and helping found the most influential and fastest-growing restaurant chain in the country. AVAILABLE NOW

SURVEYS, STUDIES & SUCH: Brought to you by BetterCreditCards.com
Researchers at Pohang University have developed a contact lens that detects diabetes. (https://bit.ly/3aTdqX9)

Kingsport police said a naked man was arrested following an incident that involved him hitting an officers cruiser. Officers were on scene at the Maple Oak Apartments when a naked man "jumped from the shadows" and started beating on the police cruiser while yelling, according to reports. Police said the man, identified as Samuel Bellamy, then ran back toward the apartments and began climbing trees. Reports state, as more officers arrived Bellamy ran away towards a nearby parking lot. Bellamy reportedly refused officers commands and was tased. Bellamy told offices he had used meth, according to police. He was transported to Holston Valley Medical Center before being transported to the Kingsport City Jail. Bellamy is charged with disorderly conduct, indecent exposure, public intoxication and resisting arrest.
https://www.wvlt.tv/content/news/Naked-Kingsport-man-arrested-after-reportedly-hitting-police-cruiser-570211081.html
BIG SCREEN-LITTLE SCREEN: Brought to you by ChannelSurferTV.com
TV watchers are saying “Little House On The Prairie” foreshadowed the Coronavirus with two episodes about a Typhus outbreak called “Quarantine” and “Plague.” (https://bit.ly/35kufZK)

“The Avengers” and “Stranger Things” were the big winners at the Virtual Kids Choice Awards. (https://pge.sx/2WAXHab)

Pennsylvania Police arrested two teenage girls who hired a hitman to kill one girl’s stepdad after he caught them in bed together. (https://bit.ly/3cUFQkU)

The Gilead Pharmaceutical Company is boosting production of an ebola drug to help the world fight the Coronavirus. (https://bit.ly/2So0fqH)

A growing number of New Yorkers are moving out of the city because the dense population makes it easier to spread germs. (https://bit.ly/3faFxVc)

An Illinois Stripper was arrested after she drove to New York City and tried to board the USS Comfort with eighteen knives in her purse. The judge set bail at $1,000. (https://bit.ly/3aOsPb3)

The Pfizer Pharmaceutical Company says its Coronavirus vaccine could be ready for emergency use by this fall. (https://bit.ly/2SjRvlA)

Cross Fit founder Lauren Jenai is planning a June wedding with her fiancé Franklin Tucker, who is under house arrest while he awaits trial for MURDER.
(https://pge.sx/2Wb908z)

Dennis Rodman’s college son DJ told reporters he had no idea his dad once went on a 48-hour bender in Las Vegas during the 1998 basketball season.
(https://bit.ly/2yb0KNY)

Disney World announced plans to reopen as soon as July, but with strict social distancing guidelines that will keep that park at fifty percent capacity. (https://bit.ly/35iiP93)

Trees weren't always biodegradable. Today, bacteria and fungi eat away at fallen trees, but that wasn't always the case. Bacteria had to evolve to eat wood, so hundreds of millions of years go, trees would fall at death, leaving large piles of dead wood. Forest fires of unimaginable proportions would burn the massive mounds of dead wood. And that's where most of the coal today on Earth came from, according to National Geographic.

Belgian Farmers currently facing a 750,000-ton surplus of potatoes, and the government has come up with a creative solution to ensure the vegetables don’t go to waste: Encourage everyone to eat more frites. Lockdown measures in the country have crippled restaurants, and in turn farmers are feeling the heat, too, with nowhere to sell their produce. However, frites, a twice-fried snack sometimes paired with mussels or topped with mayonnaise, is considered a national dish of Belgium, and many snack bars where they’re sold have been given special permission to stay open. The Department of Agriculture hopes that Belgians venture out of the house to eat frites (at a safe distance from their countrymen) twice a week instead of just once in order to aid efforts to deplete overflowing potato stocks. (https://bit.ly/2KImbZy)

A New Jersey electrical contractor is being charged with theft and conspiracy after swiping up to 1,600 respirator masks intended for a state hospital fighting the Coronavirus outbreak. Kevin Brady, of Point Pleasant Beach, is accused of stealing eight cases of the N95 masks from the Prudential Financial building in Iselin between March 27th and April 1st, the office of state Attorney General Gurbir Grewal said Thursday. “Prudential Financial had intended to donate the masks to a local hospital,” the office said in a statement, adding that each case had 200 masks each. Officials said 49-year-old Brady was able to obtain the masks because he had access to storage areas in the Prudential Financial facility. He was caught after multiple law enforcement agencies acted on a tip from the National Hoarding & Price-Gouging Task Force led by New Jersey U.S. Attorney Craig Carpenito. (https://fxn.ws/2RZeQZi)

FAKE NEWS.... OR FLORIDA?!
I read a headline, you guess if the story is something that really happened in the great state of FLORIDA or is it #FakeNews made up to trick you and amuse me
UPS is going to deliver medicine by drone to The Villages retirement community in Florida. FLORIDA (https://bit.ly/2yWHoMn)
GOOD NEWS: Brought to you by #GiftCardChallenge GiftCardChallenge.org