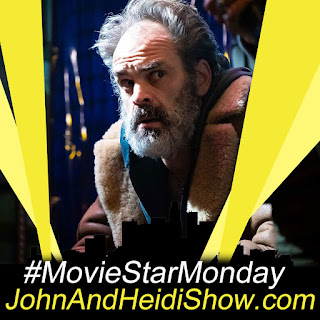 This #MovieStarMonday we visit with Steven Ogg. He made his film debut at the age of 10 with the National Film Board of Canada’s The Red Dress. After moving to New York, Ogg appeared in notable NYC shows such as One Life To Live, Law & Order and Third Watch.
Ogg is known worldwide as "Trevor Phillips" in Grand Theft Auto V, "Simon" in AMC's smash-hit, The Walking Dead, "Rebus" in HBO's Westworld and “Bob Giovanni,” Old Spice’s self-proclaimed King of Products. Additional credits include memorable roles in AMC’s Better Call Saul, Amazon’s The Tick, Comedy Central's Broad City, IFC's Stan Against Evil and the lead and producer of the 2018 independent sci-fi thriller, Solis.
Ogg will next be seen in the independent film, The Short History Of The Long Road, opposite Sabrina Carpenter, Maggie Siff and Danny Trejo - which hit theaters on May 15th.... and TNT’s highly anticipated sci-fi series Snowpiercer, premiered Sunday May 17th.

SURVEYS, STUDIES & SUCH: Brought to you by BetterCreditCards.com
A Salesforce survey found that workers have been more productive from home that they are in the office. 40% of responders said they prefer to work from home full-time. (https://zd.net/35VCdsJ)

THIS IS YOUR BRAIN ON DRUGS: Brought to you by TimeForRehab.com!
Each day we share stories about people doing dumb things under the influence, but ADDICTION IS NO LAUGHING MATTER! If you or someone you know needs help, we're here! Learn more at TimeForRehab.com.
A Springfield, Illinois man is facing charges after allegedly destroying a home and running from police officers. Springfield Police say they initially responded around midnight on Monday. They found that a silver Ford Escape had crashed into a home, making it unlivable. The suspect, 31-year-old Alfonzo Brown, fled the scene and was later found wearing only underwear, a white tank top, and black boots. Officers say he smelled of alcohol. Brown was reportedly kicking and spitting at the officer, and even tried to bite one. Brown was arrested for DUI. A clear plastic bag was later found inside the vehicle Brown was driving. Four pills inside the bag field-tested positive for suspected ecstasy. After bringing Brown to the Sangamon County Jail, police say he threw his underwear at an officer, hitting him in the duty belt. (https://bit.ly/2zaJ5pK)


BIG SCREEN-LITTLE SCREEN: Brought to you by ChannelSurferTV.com
Mathew McConaughey told Fox News that people need to stop letting politics divide us in our response to the Coronavirus. (https://pge.sx/2yII8VX)

“CBS This Morning” host Tony Dokoupil denied he was napping in the middle of the Tuesday’s show. (https://bit.ly/2yW1kiR)

The FBI accidentally revealed the name of a Saudi Diplomat who helped the 9/11 terrorists. (https://bit.ly/3dJyRvC)

The nation’s movie theaters are going to begin showing classic blockbusters for $2 admission in an effort to revive business. (https://on.wsj.com/2WQ5gcY)

Scientists are warning that a growing number of people who are panicked over murder hornets have been killing honeybees after confusing the two. (https://lat.ms/2STx3bf)

Tesla Founder Elon Musk has filed a lawsuit against Alameda County for refusing to let him reopen his auto plant amidst the Coronavirus shutdowns.
(https://on.mktw.net/3fDLdH9)

Tesla President Elon Musk reopened the company’s factories in defiance of California laws and told officials that if anybody goes to jail, it should be him.
(https://bbc.in/2WU6YKk)

The City of Los Angeles is expected to be under Coronavirus restrictions through the end of July. (https://bit.ly/3bw2oaC)

Maria Branyas, the oldest women in Spain, has beaten the Coronavirus at the age of 113. (https://bbc.in/2T0sBHM)

A Federal Judge ruled that Strip Clubs are eligible for emergency relief funds that are aimed at small businesses. (https://bit.ly/2YVlLHq)

A group of California Inmates were caught injecting themselves with the Coronavirus in hopes it would get them released from prison. (https://bit.ly/35U8bFw)

America accidentally dropped an atom bomb on South Carolina in 1958. In March 1958, a B-47 plane was headed to the United Kingdom and was armed with an atomic bomb. This bomb was even bigger than the "Fat Boy," the atomic bomb dropped on Nagasaki. During the flight, the pilots noticed a fault light, so one of them decided to check it out. In doing so, he accidentally released the emergency pin, watching in horror as the bomb dropped to the ground. The good news was, the critical part of the bomb needed to set it off was still on the plane, so it never exploded.

United Airlines is being blasted for having a completely full flight from San Juan, Puerto Rico to Houston, Texas, which allowed no room for social distancing. (https://bit.ly/3ctWeZL)

In tough economic times, nothing beats free. So, when a man from the Portland metro area heard Wendy's was giving away free four-piece chicken nuggets, he was sure to take advantage of it. The man, who goes by “Skweezy,” went to eleven Wendy's restaurants in the greater Portland and Vancouver area - twice. Skweezy had employees put the nuggets into a frying pan that he drove around with, so he could practice social distancing and do his best to stay six feet away from them. His efforts to hit up so many Wendy's even earned him a shout-out from the company on Twitter. Skweezy tweeted that he had to “hustle” to hit “every damn Wendy’s and that it took five hours. Wendy’s tweeted “That’s straight up impressive, not gonna lie.” (https://bit.ly/2STuR3J)
MOMENT OF DUH: Brought to you by InsuranceChicken.com

A North Fort Myers, Florida man punched a police officer in the face after he refused to pay a $17.54 bill from a Chili's restaurant in Cape Coral. According to the Cape Coral Police Department, 35-year-old Scott Bolton was arrested. Officers were called to the restaurant around 11:00 p.m. Thursday night. Police said that He tried to sneak out without paying the bill. When an officer tried to arrest him, he started resisting and punched the officer in the face. According to the police, Bolton then grabbed the officer's taser trying to take it away. He continued to resist until other officers got to the scene to help take Bolton into custody. Police added that he also made threats to kill the officers when he gets out of jail. (https://bit.ly/35JkGnm)
FAKE NEWS.... OR FLORIDA?!
I read a headline, you guess if the story is something that really happened in the great state of FLORIDA or is it #FakeNews made up to trick you and amuse me
A Pensacola Man was arrested for public intoxication after police found him fighting a tree ….. FLORIDA (https://bit.ly/35Ry0Gr)