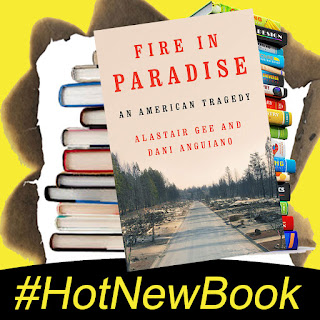 Today we visit with Alastair Gee, an award-winning editor and reporter at the Guardian who has also written for The New Yorker online, the New York Times, and the Economist... and Dani Anguiano, who writes for the Guardian and was a reporter for the Chico Enterprise-Record. They are co-authors of FIRE IN PARADISE: An American Tragedy the harrowing story of the most destructive American wildfire in a century. AVAILABLE NOW - https://amzn.to/2Auxbrn

SURVEYS, STUDIES & SUCH: Brought to you by BetterCreditCards.com
A new study aims to inject men with estrogen to help them fight the Coronavirus. (https://bit.ly/2YxQ4DR)

THIS IS YOUR BRAIN ON DRUGS: Brought to you by TimeForRehab.com!
Each day we share stories about people doing dumb things under the influence, but ADDICTION IS NO LAUGHING MATTER! If you or someone you know needs help, we're here! Learn more at TimeForRehab.com.
A motorist from Florida called Oregon State Police to report he'd been shot at while driving on Interstate 5 -- but it actually was a tire blowout, troopers said. Now he faces charges after marijuana was found in his car, along with nearly $30,000 in cash, hidden in a package of diapers. Troopers said they received a report shortly before midnight Sunday from a motorist who said he'd been shot at on the freeway in northern Douglas County. “Subsequent investigation revealed the driver was under the influence of marijuana,” OSP said in a news release Wednesday, “and his paranoia led him to believe he had been shot at after a tire on his vehicle had a blowout.” Troopers said they found about 95 grams of marijuana, marijuana items and $29,790 in cash, the latter concealed in a package of diapers. The driver and his passenger will be referred to the Lane County District Attorney's Office on money laundering charges. Moreno also was cited for DUI. (https://bit.ly/2WaD9WI)

BIG SCREEN-LITTLE SCREEN: Brought to you by ChannelSurferTV.com
Selena Gomez will star in a quarantine cooking show. The untitled 10-episode at-home cooking show will feature the recording artist and actress learning how to cook with the virtual help of a master chef. Each episode — airing on HBO Max — will highlight a food-related charity. HBO Max is a new streaming service that will launch May 27.
Sylvester Stallone said on Instagram that Demolition Man 2, a sequel to the cult classic from 1993, is officially moving forward at Warner Bros. Details are scarce at the moment, but we do know that Stallone is actively involved in the long-rumored sequel.

Some new info reveals Netflix subscribers in the United States have been averaging 3+ hours of streaming per day. For comparison, Netflix users watched an average of two hours of content per day in 2019.
A new study (out of Spain) revealed that more than half of the dog-owning drivers surveyed (54 percent) said that they drive more carefully when traveling with their pet in the car. What’s more, having a dog in the car also had the added benefit of reducing driver stress levels, with 35 percent of those surveyed saying that they feel calmer when their dog is in the car.

Robert Kraft, owner of the New England Patriots, is one of the most recent additions to Fanatics’ ALL IN Challenge, an organization which takes donations from prominent figures in sports, music, and entertainment and auctions them off to raise money for a variety of food-centric charities. Kraft has decided to auction off his own personal Super Bowl 51 ring.

In Connecticut, Jason Daddario was asked to leave a McDonald’s (in Brooklyn, CT) for failing to comply with a statewide order to wear masks in businesses to curb the spread of the coronavirus. Daddario didn’t like being told what to do and threw the rock through the window. After that, in an alleged unrelated crime, Dadario stole several pairs of “ladies underwear” from a nearby Walmart. He tried to flee but thought better of it when a police dog met him as he left the store.

There is an immortal jellyfish. When it's an adult, the "Immortal Jellyfish," scientifically named Turritopsis dohrnii, can transform its cells back to its childhood state. This usually happens when it is physically harmed, sick, or even when it is starving. The jellyfish evolved this skill in order to survive throughout history, specifically when latching onto ships. Since it can hitchhike, its DNA has spread and the not-so-rare species is emerging all over the world.

Dateline.... CHINAA newlywed couple in China filed a complaint against a local hotel after the groom broke his arm during bedroom fun and games. The groom tumbled off the bed breaking his left arm. The couple said the hotel had provided unsafe facilities.

An incident captured by a city of Miami Beach code enforcement officer’s body camera shows a man so angry that he isn’t allowed inside a Publix without a mask that he curses out the officer. In the video, the man can be heard saying there’s no pandemic and he’s filing a lawsuit. He says his constitutional rights are being violated. The man then lashes out at the grocery store’s code enforcement officer and employees before storming off. “You’re in violation of my constitutional and civil rights, there’s no pandemic, I’m filing a lawsuit, I’m allowed to buy groceries!” The city of Miami requires everyone inside grocery stores, pharmacies and most other retail businesses that are still open to wear face masks. The video comes following similar incidents in Michigan including one at a Family Dollar where a security guard was killed over an alleged disagreement involving a facemask. (https://bit.ly/35Dg5TO)

A Port Clinton, Ohio woman faces several charges after calling 9-1-1 and saying she needed to have a fire put out in her crotch. 50-year-old Katrina Morgan called the Port Clinton Police Department about 10:00 p.m. Saturday, asking for the fire department, because her "p----y" was on fire. Because of the call, Morgan was charged with felony disrupting public services and misdemeanor making false alarms. The report said that Morgan called from her friend’s home. When police arrived, they told Morgan should be arrested for making false reports and disrupting public service. The suspect became agitated and began resisting arrest. A 9-1-1 call from the incident revealed Morgan asked if their "hose is working" and said "I need somebody to come put it out with their hose.” (https://bit.ly/2W5lW0O)

FAKE NEWS.... OR FLORIDA?!
I read a headline, you guess if the story is something that really happened in the great state of FLORIDA or is it #FakeNews made up to trick you and amuse me
Police in St. John’s County arrested an elderly man who tried to run over his neighbor with a tractor ….. FLORIDA (https://dailym.ai/2VCuHBf)
GOOD NEWS: Brought to you by #GiftCardChallenge GiftCardChallenge.org