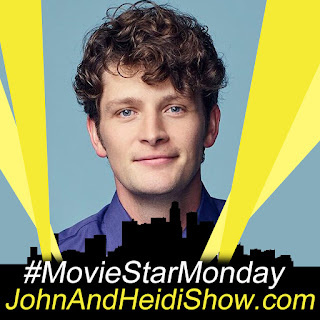 This #MovieStarMonday we visit with Brett Dier, best known for his role as Michael Cordero Jr. on Jane the Virgin. He is now playing the role of the young, enthusiastic super-teacher Charlie Brown on SCHOOLED (spin-off of Goldbergs... the 90s at William Penn Academy) Airs Wednesdays 8:30/7:30CT on ABC TV! Dier currently resides in Los Angeles. His hobbies include being a vintage Pokemon collector, meditator, alien communicator and music guy.

A new study found that drinking too much coffee can be bad for your health. (https://bit.ly/360nf4B)


A new study found that coffee is linked to lower body fat amongst women and may have anti-obesity properties for men. (https://bit.ly/2XbXMBr)

THIS IS YOUR BRAIN ON DRUGS: Brought to you by TimeForRehab.com!
Each day we share stories about people doing dumb things under the influence, but ADDICTION IS NO LAUGHING MATTER! If you or someone you know needs help, we're here! Learn more at TimeForRehab.com.
According to the Star Beacon, a postal worker in Ashtabula, Ohio was charged for allegedly selling crack-cocaine out of her mail truck. The worker, 52-year-old Darcy Spangler, is charged with trafficking in drugs and aggravated trafficking in drugs. The Star Beacon reported that authorities executed a search warrant at Spangler's home Tuesday in the culmination of a months-long investigation. The Beacon added that authorities said Spangler allegedly sold the drugs on her route. (https://bit.ly/2LjI7KL)

Josh Gad has released a new quarantine song as Olaf from the movie “Frozen.” (https://bit.ly/3dXzl1p)


Netflix released the first trailer from the new Jeffrey Epstein Documentary, but they haven’t set a release date. (https://bit.ly/3cyJst8)


There are now over 100 weather-related satellites orbiting Earth.


You’re not alone if you’ve packed on the pounds during the quarantine. A survey found that the average American has gained five pounds while on lockdown. Out of 2,000 people polled, most have gained weight due to alcohol and bread.


Doctors in China saved the life of a man who swallowed a three-inch knife to avoid charges of possessing a weapon. The man swallowed the knife eight months before and thought it had dissolved in his stomach, but doctors found it stuck in his trachea when he came in with a sore throat.


A study by RX Bar finds the average person forgets what day it is five times per week. (https://bit.ly/2WJ7P1T)


A new study claims that the Coronavirus was TAKEN to the Wuhan market by somebody who was already infected. (https://bit.ly/2TcJy1M)

Women are attracted to the scent of Good & Plenty licorice candy and cucumber. Perfumes and colognes offer alluring aromas, but it turns out that there is another smell combination that is likely to turn a lady on. One 2005 study by the Smell and Taste Treatment Research Foundation found that the most "attractive" scent for women was Good & Plenty licorice candy combined with cucumbers. The smells of cherries and barbecue were turn-offs, but "banana nut bread also had positive effects."

A Florida man jumped into a fish tank at a Bass Pro Shop on Mother’s Day, a video posted to social media shows. The video shows a man walk up the stairs, dive into the tank at the store at the Gulf Coast Town Center, and then run off. A manager followed the man out of the store and saw him leave in a silver sedan. Lee County Sheriff's Office believe the man is 27-year-old Daniel Armendariz, who is still on the loose. He could face felony criminal mischief charges as well as trespassing. The incident happened May 10th but was not reported to investigators until May 12th. Bass Pro Shops spent $3,000 decontaminating the tank. “This incident is illegal, dangerous, and highly discouraged. We work with law enforcement to investigate all individuals who personally attempt or are involved with such activities," Bass Pro Shops said in a statement. (https://bit.ly/2zLTXuv)

Police in Maryland are on the hunt for a tattooed man wanted on multiple warrants who allegedly fled from officers Tuesday. Kristopher Michael Stull has devil horns on his forehead, brass knuckles and a razor blade on his throat, and many more tattoos visible in his mugshot alone. Under his left eye, he has what appear to be the letters M-O-R-O, followed by at least one character that’s hard to make out in the picture. Stull has warrants for allegedly violating parole with underlying firearms-related charges, failure to comply with a court order, and an outstanding traffic-related issue. Stull’s rap sheet also includes convictions for robbery and for stealing firearms, and he allegedly assaulted a deputy in October. He stole guns from his girlfriend’s relatives in 2017 and received a three-year prison sentence with three more years of probation. He’d also been convicted of an unrelated robbery in 2005 and again later for illegal possession of a firearm. (https://bit.ly/2Z0wfW7)
FAKE NEWS.... OR FLORIDA?!
I read a headline, you guess if the story is something that really happened in the great state of FLORIDA or is it #FakeNews made up to trick you and amuse me
A Winter Springs woman named Kitty was arrested for stealing dogs ….. FLORIDA (https://bit.ly/2WsMREX)
GOOD NEWS: Brought to you by #GiftCardChallenge GiftCardChallenge.org

This 10-Year-Old Is Sending Thousands Of Art Kits To Kids In Homeless Shelters And Foster Care During The Pandemic
https://www.sunnyskyz.com/good-news/3796/This-10-Year-Old-Is-Sending-Thousands-Of-Art-Kits-To-Kids-In-Homeless-Shelters-And-Foster-Care-During-The-Pandemic