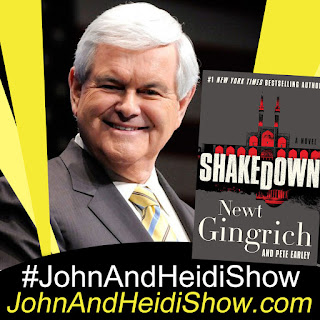 Today we visit with Newt Gingrich, former Speaker of the House and 2012 presidential candidate. He is a Fox News contributor and the author of 38 books, including many New York Times bestsellers. His latest is a novel. c is a timely follow-up to their (with Pete Earley) bestseller Collusion, a riveting ripped-from-the-headlines political thriller featuring Valerie Mayberry and Brett Garrett. As this unlikely pair—a disgraced former FBI agent and a dishonorably discharged ex-Navy SEAL—team to avert a deadly crisis with Iran, they once again operate outside official channels, caught between competing world powers as they race to avoid both an international incident and certain danger to themselves.
AVAILABLE NOW - https://amzn.to/3czKvsB

So, a study found that 80% of parents have a new found respect for teachers after having to homeschool their kids. (https://bit.ly/3dh0Wdg)

THIS IS YOUR BRAIN ON DRUGS: Brought to you by TimeForRehab.com!
Each day we share stories about people doing dumb things under the influence, but ADDICTION IS NO LAUGHING MATTER! If you or someone you know needs help, we're here! Learn more at TimeForRehab.com.
Tulsa Police responded to Woodland Hills Mall for a disturbance caused by a naked man and woman. Corporal Brian Collum said it started with a stalled vehicle call and a woman getting out of the vehicle, naked, and running. Her clothes were found in the car. Police said the man followed the woman and was carrying a pit bull on his shoulders. Officers said they got a call about every half-block from citizens. Collum said they found the man's clothes in a parking lot between a restaurant and the mall. He said drugs were found in the clothes. Officers went into the mall and found the couple hugging each other. He said Macy's employees had wrapped a towel around them both. The pair admitted to taking marijuana and dipping it into a cup of PCP. They could be booked on complaints of indecent exposure, vandalism, and public intoxication. (https://bit.ly/2L6R1ef)

The cast of Community and creator Dan Harmon are reuniting for a physically-distanced table read and Q&A, to benefit COVID-19 relief efforts. The table read will be shown in its entirety, along with a Q&A of fan questions, on Monday, May 18, on the show’s official YouTube page. The cast will read “Cooperative Polygraphy,” the fourth episode of Season 5, which first aired on January 16, 2014 on NBC.
TV icon Betty White has signed on to star in an upcoming Christmas movie for Lifetime. In the untitled film, White’s character “helps whip would-be Santas into shape, spreading the true meaning of Christmas and leading everyone to wonder: Is she secretly Mrs. Claus?”

A 104-year-old Brooklyn, New York, resident has lived through the 1918 Spanish flu pandemic and both World Wars. Plus, she’s survived Stage 4 melanoma, two broken hips, an infection that affects the colon, and now the coronavirus. Ida Acconciamessa got COVID-10 in late March, but by the end of April she was “very chatty” once again. According to her daughter the secret to her mom’s longevity is a glass of red wine and an apple every day.

You’re throwing a ball for a toddler to smack with a plastic bat. You toss it gently, slowly, to make it easier. He just can’t hit it. A study says that’s because you throw too slowly — and kids’ brains aren’t wired for slow motion. Researchers say slow balls actually appear stationary to a child. Add a little speed to the pitch and the child is able to judge its speed more accurately.


Police in Michigan (Holly) have arrested a man they said used a Dollar Tree employee’s shirt to wipe his nose after being advised that he had to wear a mask in the store. https://www.facebook.com/watch/?v=238577607237058

Your soap-and-water sessions might do more than just scrub away dirt and bacteria. Research (University of Michigan) suggests that hand washing can actually wash away worries about day-to-day decisions.
A Vermont man faces charges after police say he went into a Dunkin’ Donuts store without his pants. Police say 39-year-old Benjamin Stearman went into the store and exposed himself to the clerk.

Every time you shuffle a deck of cards, you get a combination that's never existed. Your angsty teenage dreams of being the most original, unique person alive could actually come true! Grab a deck of cards and shuffle. Most likely, you will have created a combination of cards that had never existed yet until that moment. Any math experts out there know that this is because the probability comes out to 52 factorial or 52! (52 x 51 x 50 … x 2 x 1). The probability that two card shuffles are exactly the same is so small, it likely will never happen.

An Australian mom said her Mother’s Day became all the more special when a lottery ticket given to her by her daughter earned a jackpot exceeding $30,000. The woman said she plans to use her prize money to make home improvements.

This rather curious incident took place on March 25th but has only now been publicized in local media. Two images released by the Swedish customs agency show that the couple - a man and a woman - arrived into the country in a Hummer vehicle which bore a “Zombie Response Team” logo as well as the rather ominous warning that “infected people will be shot.” Also, in their possession was a large number of illegal weapons. Reporting varies slightly as to exactly how many weapons were seized, from sixteen to “over twenty.” What has been confirmed is that their arsenal included several crossbows, a taser or some other form of electric shock weapon, several firearms designed to fire teargas canisters, a knuckle iron, and at least one truncheon. The local prosecutor noted that they hadn't chosen the most inconspicuous of vehicles for smuggling weaponry, while the couple's defense attorney states that the couple had not known that the weapons could not be legally brought into the country. (https://bit.ly/2Lf0u3b)

A New York man has been accused of stealing nine Coronavirus stimulus checks. 31-year-old Feng Chen of Brooklyn was arrested and charged with stealing mail. New York police officers found Chen had credit cards, checks, and nine stimulus payments that did not belong to him, according to a news release from the U.S. Attorney’s office for the Eastern District of New York. NYPD commissioner Dermot Shea said the COVID-19 pandemic is providing criminals an opportunity for criminal scams. Chen’s lawyer, Jan Rostal, said she had no comment at this time. If convicted, Chen could face a maximum of five years in prison. (https://bit.ly/3b1rgGT)

FAKE NEWS.... OR FLORIDA?!
I read a headline, you guess if the story is something that really happened in the great state of FLORIDA or is it #FakeNews made up to trick you and amuse me
A Vero Beach man appealed his drinking and driving arrest because he only drank when he was at stop lights ….. FLORIDA (https://bit.ly/2He3taY)
GOOD NEWS: Brought to you by #GiftCardChallenge GiftCardChallenge.org