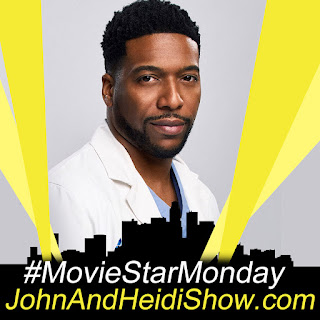 This #MovieStarMonday we visit with Jocko Sims… actor, writer and producer who has had roles in numerous film and television projects, including "Dreamgirls," "Jarhead" and the 2014 summer box office smash "Dawn of the Planet of the Apes.” Starz original series "Crash.” He has starred as Lt. Carlton Burk on the TNT network hit "The Last Ship," Sims portrayed Robert Franklin on Showtime's second season of "Masters of Sex.” Sims has recurred and/or guest-starred on several television series, including "Franklin & Bash," "Castle," "Grey's Anatomy," "NCIS," "Burn Notice," "CSI," "Bones" and most recently on Showtime's "I'm Dying Up Here.” NBC’s “New Amsterdam” Jocko Sims (Dr. Floyd Reynolds) The final episode of the season aired April 14, but the show has been renewed for an additional three seasons on NBC, so we will be back once we overcome this time! https://www.nbc.com/new-amsterdam

SURVEYS, STUDIES & SUCH: Brought to you by BetterCreditCards.com
A study by the University of Chicago found that people are happier making major life decisions on a coin flip. (https://bit.ly/3gaDSiy)

A California man was arrested after he allegedly forced the driver of a tanker truck carrying red wine to pull over, climbed onboard and began drinking from the tank, as the truck continued down the highway. Gabriel Moreno, 39, was arrested after he allegedly climbed underneath a tanker truck moving down the highway, unscrewed a valve and gulped down the red wine that gushed out. The dash cam video from a Cherokee Freight Lines tanker truck hauling bulk red wine through Modesto, California, allegedly shows suspect 39-year-old Gabriel Moreno in a sedan, putting his hazard lights on and directing the truck to the side of the highway. Believing he may have had a mechanical problem, the truck driver pulled over, only to see Moreno get out of his car wearing just underwear. He ran to the passenger side of the truck and out of view of the camera. As the driver pulled back on the freeway, another onboard camera captured the suspect jump back into view then on the back of the wine truck. With no shirt and no shoes, Moreno rode on the side of the tanker then climbed underneath the truck as it hit freeway speeds. Authorities say the suspect unscrewed a valve that sent the tanker’s wine gushing out, and he gulped as much as he could.
The truck driver called the California Highway Patrol after he noticed a dashboard gauge showing he was losing fluids, hundreds of gallons of red wine. “I’ve listened to radio. I’ve listened to thousands and thousands of calls. This one’s up there in the top 10,” said Officer Tom Olsen with the Modesto CHP. “This individual was able to release the wine from under the tanker, and he placed himself underneath the tanker in such a manner - the best way to describe this was somebody doing snow angels.” Moreno was arrested. The trucking company weighed the tanker following the incident and found it had lost about 1,000 gallons of red wine, most of it ending up on the highway. That’s enough to fill about 5,000 bottles.
https://www.wvlt.tv/content/news/Man-allegedly-climbs-under-speeding-truck-filled-with-wine-drinks-from-tank-570348961.html


BIG SCREEN-LITTLE SCREEN: Brought to you by ChannelSurferTV.com
John Krasinski‘s feel-good web series might be on hiatus, but he still has Some Good News to share: Krasinski is in advanced negotiations to bring it to CBS’ streaming service, CBS All Access. Krasinski would not host the new show as he’s done on his YouTube channel, though he will executive-produce and likely have a recurring on-air presence.
SCOOP OF THE DAY: Brought to you by InsuranceChicken.com
Grimes and Elon Musk have changed their baby’s name and removed the number twelve because California law does not allow for numbers to be a part of legal names. The new name is “X AE A-Xii.” (https://pge.sx/2yBuXWM)

Elvis Presley’s bedazzled jock strap is going up for auction this week. (https://bit.ly/2WYRXZ5)

Page Six is reporting that famous fashion designer Halston served cocaine to supermodels after dinner at his house. (https://pge.sx/2zViY6A)

A Washington State man drove six hundred miles to get a haircut after hearing salons were open in Sacramento, California. (https://bit.ly/36fzRow)

An Arizona school teacher who was busted for having sex with a male student has filed for divorce from her husband. The woman was caught on video with a student. (https://bit.ly/3bT5DZD)

A video of a couple having sex on the platform of the New York City Subway has gone viral. (https://bit.ly/2Xg2iyN)

Bud Light has rebooted its decades-old "Real American Heroes" ads with a test designed for the COVID-19 era. The campaign is called "Stay at Home Humans of Genius". The new ads expand the definition of heroes and geniuses to include anyone and everyone who's finding creative stuff to do at home during the pandemic, like "Indoor Sports Maker-Upper," the "Creative Recipe Sharer," the "Balcony Sing-Along Starter" and the "Air High-Five Inventor." https://www.youtube.com/user/officialbudlight/search?query=genius

Two-thirds of adults are ‘embarrassed’ by huge gaps in their knowledge — and blame the choices they made while in education. Languages, history, economics, and Information Technology are among the areas people wish they were more knowledgeable in.

There's an entire family in Italy that feels almost no pain. Members of the Marsili family handle injuries remarkably well and that's because they only experience pain for a moment before it fades away. Letizia Marsili told Smithsonian Magazine, "I just thought of it as part of who I was. I was strong, I was resilient. I bounced back." However, when a researcher at the University of Siena, where Letizia works, noticed her unusual tolerance for pain—which is something her mother, sister, and son all share—the two decided to collaborate to see what was going on. They discovered that Letizia experiences "the good pain, the pain that alerts us to danger. Then it disappear[s]. The bad kind of pain, the chronic pain, the ongoing pain that we take painkillers for—she simply [doesn't] feel that."

Dateline.... CHINAA security guard in China was spotted by police smuggling two suitcases of stolen eggs out of the factory where he worked. When they investigated, police found more than 1,000 eggs in the man’s fridge, as well as soap, meat, boxes of tissues, and bottles of detergent.

An Oregon man faces accusations that he drove an acquaintance into the woods during an argument and then pepper-sprayed and punched the man before throwing the victim's prosthetic leg into the woods. The attacker then poured gasoline on the victim - and threatened to set him on fire using a cigarette lighter. That's what the Deschutes County Sheriff's Office alleges happened between 34-year-old Troy Kenneth Dahl and another man May 5th in a remote forested area near La Pine. Deputies searched the area and located Dahl's Chevy. Investigators obtained a search warrant and seized evidence from the vehicle. Dahl surrendered to deputies the next day and was arrested for investigation of Assault II, Menacing, Driving While Suspended, Coercion, and Unlawful Use of Stun Gun / Pepper Spray. (https://bit.ly/2ZB7OyA)
MOMENT OF DUH: Brought to you by InsuranceChicken.com

A Washington state software engineer is charged with fraudulently seeking over $1.5 million in Coronavirus relief funds intended for small business loans, prosecutors announced Friday. 35-year-old Issaquah resident Baoke Zhang is accused of filing applications seeking forgivable loans guaranteed by the Small Business Administration (SBA) under the Coronavirus Aid, Relief and Economic Security (CARES) Act. According to the charges, Zhang sought the relief funds by claiming fake payroll expenses with his non-existent information technology companies. Zhang allegedly submitted fake documents to two different banks in support of applications for forgivable loans guaranteed by the SBA for coronavirus relief through the Paycheck Protection Program (PPP). Zhang now faces charges of wire fraud and bank fraud. (https://bit.ly/3gn5MZ2)
FAKE NEWS.... OR FLORIDA?!
I read a headline, you guess if the story is something that really happened in the great state of FLORIDA or is it #FakeNews made up to trick you and amuse me
A Fort Myers man who owed $25,000 in parking tickets told a judge that Jesus told him he could park there ….. FAKE NEWS
GOOD NEWS: Brought to you by #GiftCardChallenge GiftCardChallenge.org