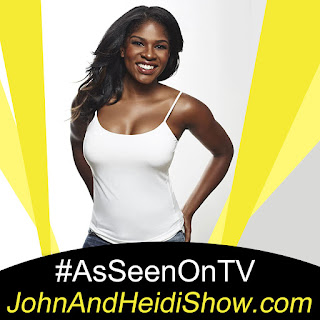 Today we speak with actress, entrepreneur and motivational speaker Edwina Findley Dickerson. She burst onto the scene as Omar’s sidekick Tosha Mitchell in HBO’s acclaimed series, The Wire, and later starred as Davina Lambreaux in HBO’s hit show Treme for four seasons. On the big screen, she starred in Ava Duvernay’s award-winning feature Middle of Nowhere, and Get Hard alongside Will Ferrell and Kevin Hart. Now, Edwina can be seen Tuesday nights on OWN: Oprah Winfrey Network in Tyler Perry’s hit drama If Loving You is Wrong, now in its fifth and final season. Edwina plays Kelly, part of a group of husbands, wives and friends in the same middle-class neighborhood, whose lives are entangled by heartbreak and lies that threaten to destroy everything. Aside from her acting career, Edwina is a sought-after motivational speaker and founder of AbundantLifeU, a national organization that inspires, prepares and trains disadvantaged young adults to achieve success in business and in life. After realizing that many young people lacked the know-how to follow their dreams, Edwina assembled a collection of teachers and coaches, and began traveling the country conducting life and career workshops. For the past 15 years, AbundantLifeU has empowered and helped thousands of people achieve their dreams through programs in job readiness, financial literacy, entrepreneurship and personal development.

A survey by the Treasury Department found that unemployment claims fell last week for the first time since the Coronavirus lockdowns began. (https://cnb.cx/36Im6yX)

THIS IS YOUR BRAIN ON DRUGS: Brought to you by TimeForRehab.com!
Each day we share stories about people doing dumb things under the influence, but ADDICTION IS NO LAUGHING MATTER! If you or someone you know needs help, we're here! Learn more at TimeForRehab.com.
Wild video shows a drunk zoo visitor in Poland jumping into a bear enclosure and wrestling one of the animals. The 23-year-old man was arrested for brawling the large brown bear named Sabrina at the Warsaw Zoo — and faces additional penalties because he was wasn’t wearing a mask. In the footage, the man, who was believed to be intoxicated, is seen Thursday already inside the exhibit as the female bear, Sabrina, approaches him. He then jumps into a moat inside the enclosure to escape Sabrina’s advances — but the animal follows into the water after him. As a crowd watches, the pair fight each other in the water for about a minute. He then pushes the animal away before finally finding refuge on the top of an artificial island. He was arrested and charged with animal cruelty, disturbing the peace, and not wearing a face mask under the country’s Coronavirus guidelines. (https://bit.ly/3gr5PmH)

Denzel Washington’s son John says his father once gave his youth football team the famous speech from the movie “Malcolm X” before they took the field. (https://pge.sx/2TM47mb)

Mike Tyson has been offered a $20 million contract by the Bare Knuckle Fighting Championships to make a comeback later this year. Tyson’s last pro fight was over fifteen years ago and he lost to a guy by the name of Peter McBride. (https://bit.ly/2zo13pp)

A survey finds a third of husbands check with their wives before touching the thermostat.

A Los Angeles artist wore a bikini made of masks outside of Trader Joe’s to protest the lockdown. The woman claims the virus is a hoax and that everyone who believes in it is blind. (https://bit.ly/3gpcZYv)


Illinois police arrested a man who groped a female reporter during a live TV broadcast and shouted an obscene phrase. The guy who did this was a 20-year old who has since confessed to the crime. (https://bit.ly/2ZDN2yp)


A video of a 103-year-old Massachusetts woman who beat the Coronavirus and celebrated by drinking a Bud Light has gone viral . (https://bit.ly/2AcIxQJ)


Authorities are reporting that a grizzly bear attacked a mountain biker in the Montana Hills. (https://bit.ly/3eqJkw6)

FUN FACT FOR YOU:Share this with your friends... they'll think you're really smart!
Scientists were able to take a picture of an atom's shadow. Whether you're a professional photographer or not, you'll probably be impressed by the photo-related feat accomplished by a team at Australia's Griffith University in 2012. Using an electrical field to suspend a charged atom in a vacuum chamber, the team shot a laser beam at the atom and took a photo of the shadow it produced. While atoms have been photographed before, their shadows have not, making this accomplishment unprecedented.

A man who refused to wear a mask inside a Florida government office was arrested yesterday on a pair of criminal charges, according to a court filing. Police say that 34-year-old John Luongo was collared Tuesday afternoon following a disturbance inside the Indian River County tax collector’s office. Luongo, a Vero Beach resident, was charged with trespassing and resisting arrest, both misdemeanors. An administrator told cops that she approached Luongo after hearing him “aggressively raising” his voice inside the office. The worker, Lori Bloom, said she told Luongo to “lower his voice and put his mask on inside the office.” Luongo was booked into the county jail, from which he was later released after posting $1,000 bond. Luongo--whose rap sheet includes burglary, grand theft, and battery convictions--is scheduled for arraignment on June 30th. (https://bit.ly/2XeIZap)

A naked man broke into a locked Florida high school apparently to trash the building, causing $100,000 worth of damages during a 22-hour vandalism spree. The mayhem began inside Miramar High School just before 8:00 a.m. on Memorial Day, when the man busted in, and spent “an entire day” wreaking havoc. “Identify him and you will be eligible for a reward of up to $3,000,” police tweeted Tuesday. Surveillance footage from inside the public school, which is closed due to the ongoing Coronavirus pandemic, showed the man still at the building on 6:00 a.m. Tuesday, police told the Miami Herald. The suspect, who appears to be wearing headphones in a photo released by police, broke computers inside the school, put graffiti on walls and flooded sections of the building. It’s unclear if the suspect has any connection to the school. Investigators are looking into whether he’s a former student, but have been unable to confirm that. (https://bit.ly/2TK1MrO)
FAKE NEWS.... OR FLORIDA?!
I read a headline, you guess if the story is something that really happened in the great state of FLORIDA or is it #FakeNews made up to trick you and amuse me

A Florida man was arrested for watering his neighbor's lawn during a water restriction period in an attempt to get the neighbor in trouble. FAKE NEWS
GOOD NEWS: Brought to you by #GiftCardChallenge GiftCardChallenge.org