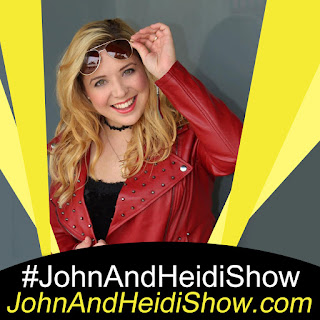 Charli Marie is a screenwriter, a social media coordinator, and a script supervisor, but her main love and focus is acting! We're going to visit with her about some of her projects in the works... and what it's like to be a new actress in Hollywood. https://charli-marie.com/

SURVEYS, STUDIES & SUCH: Brought to you by BetterCreditCards.com
A study by the U.S. Census Bureau found that one third of adults are showing signs of depression or anxiety. Forty million people are out of work. 100,000 have died. Did we really need a study to tell us people are depressed? (https://bit.ly/36ElFFP)

THIS IS YOUR BRAIN ON DRUGS: Brought to you by TimeForRehab.com!
Each day we share stories about people doing dumb things under the influence, but ADDICTION IS NO LAUGHING MATTER! If you or someone you know needs help, we're here! Learn more at TimeForRehab.com.
A Maine man accidentally started a wildfire Thursday when he fell and lost his joint while mowing a field. The man was smoking a joint while mowing a field with a battery-powered lawnmower, according to a Maine Forest Service report. At some point, the man fell down, and lost the joint. “He then walked back up to his house and then turned and noticed the field was on fire,” according to the forest service. Two acres burned in the fire. Additional information about the fire wasn’t immediately available. That fire came as forest rangers contended with “red flag” conditions, with temperatures reaching up into the 80s and winds gusting up to 25 mph increasing the risk of wildfires across the western mountains, the foothills, northern and Down East Maine. (https://bit.ly/36BeEWs)

BIG SCREEN-LITTLE SCREEN: Brought to you by ChannelSurferTV.com
“Real Housewives of Atlanta” star Nene Leaks is accused of being in an “inappropriate relationship” with a family friend. (https://pge.sx/2AdPnpi)

ABC Executives are said to be “extremely worried” that Ryan Seacrest is “overdoing it.” (https://pge.sx/3dmbMiC)

“Mission Impossible 7” is set to begin filming in September. (https://bit.ly/2XrLAh0)

A video of a man dressed as Spider-Man climbing the Manhattan Bridge during protests in New York City has gone viral. (https://bit.ly/3gUkze6)

Sports Illustrated is posting the winners of its “Swimsuit Icon Challenge,” which asked regular women to recreate the iconic poses from previous swimsuit issues. (https://bit.ly/3gPA7Qj)

Herbert Stempel, the whistleblower from quiz show scandals of the 1950’s, has died at the age of 93. (https://bit.ly/2yVOGjV)

A new app called GLOBE allows people to rent space by the hour to escape loved ones who are in their homes during lockdown. (https://bit.ly/36PhI1j)

The Airport Spa Chain “XpresSpa” has snagged a $5.6 million dollar bailout from the Federal Government. (https://bit.ly/3eCHnwO)

Dateline.... LONDONScotland Yard dispatched armed guards to catch a dangerous wildcat that was roaming the streets of London Tuesday only to find out it was a large house cat. (https://bit.ly/3gpP0ID)

A captain with the fire department in Tulsa, Oklahoma, is under arrest because police say he robbed two banks and stole nearly $320,000. Capt. Jerry Brown, who has been with the fire department since 2002, is accused by police of robbing a bank in March and another in May. Brown allegedly robbed the Oklahoma Capital Bank in Skiatook on March 12th. The captain, who had an account at the bank, was recognized by one of the employees from the way he walked and his muscular build. The second robbery occurred on May 7th at the Exchange Bank in Sperry. Witnesses for both robberies said the suspect wore khaki pants, black gloves with a yellow logo, and used a black backpack to collect the money. Brown was arrested in the parking lot of his fire station Monday and was released on a $50,000 bond two days later. He is scheduled for arraignment June 18th. The Tulsa Fire Department placed Brown on administrative leave. (https://cnn.it/3eI66jw)
MOMENT OF DUH: Brought to you by InsuranceChicken.com

A former biotech executive pleaded guilty to a federal charge and admitted paying $50,000 to Georgetown University's former tennis coach to get his daughter admitted to the prestigious school. Robert Repella, a 61-year-old resident of Ambler, Pennsylvania, pleaded guilty to one count of conspiracy to commit mail fraud and honest services mail fraud during a video conference held by U.S. District Court Judge Allison Burroughs in Boston. Repella's offense is not part of the conspiracy led by “Operative Varsity Blues” mastermind Rick Singer, prosecutors said, though federal agents stumbled onto the Pennsylvania man during the probe that rocked higher education last year. Former Georgetown men's and women's tennis coach Gordon Ernst, who's accused of pocketing $2.7 million in bribes, has pleaded not guilty to a host charges connected to the alleged "Varsity Blues" conspiracy. Judge Burroughs set Repella's sentencing for Sept. 23rd. (https://nbcnews.to/2TXoWuO)
FAKE NEWS.... OR FLORIDA?!
I read a headline, you guess if the story is something that really happened in the great state of FLORIDA or is it #FakeNews made up to trick you and amuse me
A Palm Beach County Man was arrested for assault after throwing an alligator through a Wendy’s drive-thru window ….. FLORIDA (https://fxn.ws/2FkSnii)GOOD NEWS: Brought to you by #GiftCardChallenge GiftCardChallenge.org