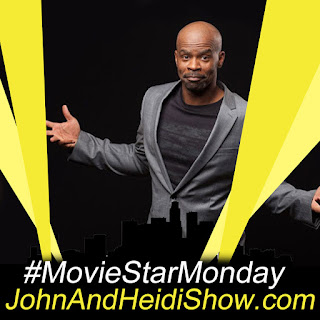 This #MovieStarMonday we visit with very funny comedian MICHAEL JR, we've had him on the show in the past for a #ComedyCall, but now he's the star of a new movie SELFIE DAD, available NOW on premium VOD platforms, just in time for this Father's Day!

Turns out there are laws when throwing White Claws. In an attempt to avoid arrest, a Nebraska suspect tossed a can of the popular hard seltzer at cops who sought to collar him for pulling a knife on a hotel employee. According to police, 36-year-old Matthew Stinson had threatened to “kill multiple times” while in the lobby of the Luxury Inn in Lincoln. Stinson, who was holding a knife, allegedly threatened to murder a clerk at the hotel where he had been staying. By the time Lincoln Police Department officers arrived at the hotel, Stinson had fled the area. When Stinson was located about six hours later, he became “agitated” and threw a can of White Claw at police “and took off running.” The spiked sparkling water, however, missed its targets and Stinson was apprehended after a short foot chase. He was charged with resisting arrest, use of a deadly weapon to commit a felony, and making terroristic threats. (https://bit.ly/37BGlPc)


NBC is bringing back “30 Rock” next month for a remotely produced one-hour special. (https://bit.ly/2YLm2uF)

Have you ever wanted to talk to Keanu Reeves? Well, you now have the opportunity to have a 15-minute Zoom chat with him. Reeves is auctioning off the online chat for an Idaho-based children’s cancer-fighting non-profit. The bidding began at $10,000 but has since risen to $16,500 https://crgauction2020.ggo.bid/bidding/package/13070180

Dr. Anthony Fauci says the ban on British People coming to the U.S. will remain in place this summer. (https://bit.ly/2UKmCaW)

Spanx is taking 50% off all of their undergarments in an effort to boost sales in the wake of the lockdowns. (https://bit.ly/3hxvsmn)

Many of the nation’s Subway Sandwich Shop Owners do not plan to go along with the company’s new promo that sells two foot-longs for $10. (https://bit.ly/2Y5apzI)

A growing number of airlines are banning alcoholic drink sales because of Coronavirus concerns. (https://cnn.it/30Ov1Ox)

Chuck E. Cheese is said to be on the brink of filing for Chapter 11 Bankruptcy. (https://bit.ly/3d9UfcD)

Eighteen members of a “Nature Loving Cult” were arrested for breaking Hawaiian quarantine rules by living in the wild. (https://bit.ly/3hDjeIR)

A British politician is calling on Kellogg’s to ban Rice Krispies because each box features “Three White Boys” on the cover. (https://bit.ly/3hDj8AZ)

China canceled over 1200 flights because of a new surge in Coronavirus cases linked to a Wet Market in Beijing. (https://bit.ly/30MZ3lM)

U.S. Retail Sales soared by 17% in the month of May, as the economy showed strong signs of a rebound. (https://bit.ly/2UP3c4U)

The Sundance Kid took his nickname from the town of Sundance, Wyoming. You may not recognize the name Harry Alonzo Longabaugh, and that's because he was famously (or infamously) known by his nickname, the Sundance Kid. The American outlaw, who was born in 1868 and was killed in 1908, took his now-historical moniker from the only town that put him behind bars: Sundance, Wyoming. He was jailed there when he was just 15 years old for stealing a horse and was sentenced to 18 months. The Sundance Kid went on to join the Wild Bunch, a group of robbers and rustlers who ranged through the Rocky Mountains in the late 19th century.

Police in New Zealand broke down the door to a home after receiving an emergency call from the building, only to find that the call had apparently been made by the cat. It seems the cat had dialed the emergency number while taking a stroll across a telephone attached to a fax/copy machine in the house. The family was out at the time.

A Florida man’s crime spree started with him exposing himself at a flea market, then stripping naked, stealing a car, and committing various other criminal acts before he was arrested less than an hour later. Deputies said the first call they received about 23-year-old Lahorace Pickett Jr. came in at about 11:15 a.m. last Wednesday. The call came from a diner inside T&W Flea Market in Pensacola, where witnesses reported Pickett jumped on a coin machine while kicking and punching it then went to the ground where he exposed himself and started screaming, “call the cops, the dead are rising.” From there, he jumped on a customer’s shoulders and attacked a worker who was behind the counter, grabbing her then punching her when she pushed him away. Then deputies said he was chased out of the diner and went out to the parking lot, stripped naked, and stole someone’s Chevrolet Sonic. After his insane crime spree, he was arrested on nineteen charges including aggravated assault and aggravated burglary. (https://bit.ly/3dR0R0x)

Oklahoma police were looking for two people who allegedly became so enraged after getting the wrong order at a Sonic drive-thru that one shattered the glass front door. Police say the incident started over the wrong sauce on an order of Sonic chicken tenders. The driver handed her food back to the Del City Sonic employee and pointed to the receipt after an exchange of words. “The store eventually said, ‘Hey, we are refusing you service,'” Major Arterbury stated. Minutes later, the food chain’s manager threw the cash back into the car and asked repeatedly for the pair to leave. Surveillance video shows a man in the passenger seat hop out and start punching the window. The man was caught on camera reaching down onto the floor board and chucking a glass bottle straight at the employees, shattering the front door of the building. Del City Police reported that they have recently identified the two suspects. (https://bit.ly/2AuKhFH)