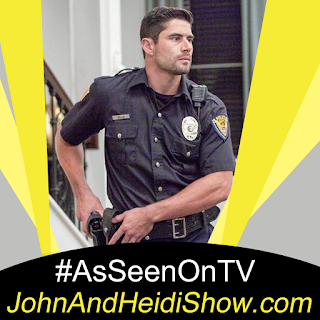 Today we visit with Joel Rush, he just wrapped up 5 years with Tyler Perry's IF LOVING YOU IS WRONG on the Oprah Winfrey Network. You can catch up with reruns on OWN or find every episode on Hulu. - http://www.oprah.com/app/if-loving-you-is-wrong.html

A new study shows that intermittent fasting could help your cardiac health. (https://bit.ly/3fpVEx7)

Hundreds of partiers converged on St. Marks Place in the East Village Friday night — Coronavirus pandemic be damned. Crowds of at least 200 were seen drinking outside for hours, most without face masks, on the stretch between Avenue A and First Avenue alone. Revelers lounged against Citi Bike racks or strolled with cups of beers and hard seltzers tucked in koozies in what felt like a giant bar crawl. “The way I see it, it’s like already past the 8th; that’s my marker,” said Sarah, a law student who lives in the East Village, in reference to the date marking the city’s entrance into its Phase One of reopening under state guidelines. “Now I’m just like, how long can you live in isolation scrolling on Tinder? You can’t do that enough already. You need to venture out,” she added. MTA buses and other vehicles crawled through the massive throng of carousers, who spilled into the street as others sat at the curb. (https://bit.ly/3fkbtWg)


Film’s biggest night is being rescheduled for the first time in 40 years due to the coronavirus pandemic. The Academy of Motion Picture Arts and Sciences announced on Monday that the 93rd Oscars will no longer take place on February 28 as planned. Instead, the board of governors said the show will take place on April 25, 2021. The last time the Oscars were postponed was in 1981, when the ceremony was delayed 24 hours because of an assassination attempt on President Ronald Reagan.

A bizarre snapshot of the surface of Mars has recently resurfaced along with the conspiracy theory that it shows a human bone. Some people think they can see a femur in rubble on the Red Planet but this theory was debunked by NASA long ago. The photo was actually taken back in 2014 by the Curiosity Rover’s MastCam. It’s still used by conspiracy theorists to claim that there was once human life on Mars.

Researchers are studying the lint in our belly buttons.

Target will raise its minimum wage for employees to $15 up from $13 starting July 5, a few months ahead of a deadline it set three years ago.

There is some good that comes from Facebook, but one of the biggest reasons to quit: it’s a giant time-suck. It’s estimated that the average casual user (58 minutes per day on Facebook) who has been active on the site for 10 years has wasted upwards of 140 entire days of their life scrolling and liking and commenting on pictures and posts.

A man in the Ukraine told police he thinks his ex-girlfriend used a key he had given her to enter his apartment, steal his TV remote, and slash his clothes with a knife.

A little rudeness can go a long way in the fight to curb jaywalkers. Experiments conducted by students at a university in China showed that warning signs written with insulting messages had greater impact than those with nicer messages. A sign reading “Jaywalkers are ugly” placed at an intersection proved to be the most effective, reducing cases of jaywalking by about 40 percent.

French President Emmanuel Macron says he supports police brutality protests but he will not remove statues of racist leaders because he doesn’t want to erase the country’s past. (https://bit.ly/2C2pMAi)

A former Hernando, Florida Commissioner who was charged with running a brothel has filed to run for his old seat. Two years ago, Nick Nicholson made national headlines when the then-Hernando County commissioner was charged with giving room and board to prostitutes in exchange for sex and running a brothel from his Spring Hill home. After the 2018 arrest, Nicholson was blasted by the local Republican leadership. He was suspended by the governor and resigned his seat. As a first-time offender facing misdemeanor charges, he ended up taking a plea deal and paid a fine of $729. Now he wants his old job back. He filed paperwork early Monday, the start of official qualifying for local political offices, to run again for the District 1 commission seat. The Hernando County Republican executive committee will not support him in his new run for the seat, said Jeff Holcomb, chairman of the committee and a sitting Hernando County commissioner. (https://bit.ly/2YnBOM5)

He isn’t even her father, yet a Florida man let a 12-year-old girl drive his SUV and told her to speed because he wanted to be a “cool father.” 41-year-old Shaun Michaelsen told the arresting officer he is friends with the girl’s mother and that the girl and her friend were staying with him for a few days. He said the girl had asked earlier in the day if she could drive his Jeep, so he thought “it would be cool” and that he was trying to be a “cool father,” the police report said. Michaelsen also told officers he had been drinking. Jupiter Officer Craig Yochum said in his arrest report that he spotted the Jeep make an illegal U-turn and then speed away at about 12:10 a.m. Monday. He followed and the Jeep reached speeds of 85 mph in a 45-mph zone before he was able to pull it over. Michaelsen is charged with child neglect and allowing an unauthorized person to drive. (https://cbsloc.al/3hfhF3q)

A Miami man threw feces at a judge during his trial and was later acquitted ….. FLORIDA (https://nyp.st/2ICdm2W)

Man Climbs Into Sewer To Save Ducklings