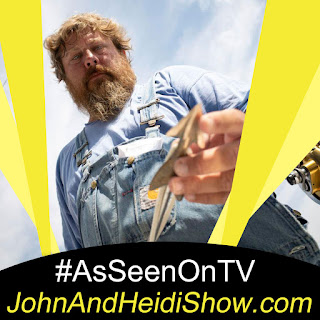 (One of the World’s Most Valuable Fish), Two Seasoned Fishing Crews Put it all on the line in Discovery’s Riveting New Series ALL ON THE LINE, Tuesdays nights on Discovery Channel.

National Flip Flop Day
Juneteenth (this commemorates the end of legal slavery in the U.S. in 1865, when the last remaining enslaved African Americans were freed from the binds of the Confederacy at the end of the Civil War, and is celebrated annually)


Researchers have created two models that show what the human body will look like after twenty years of binging Netflix. (https://bit.ly/30uXuZz)

A Colorado man is facing drug charges after police say he told them he was attempting to create a healthy meth substance with acai berries inside a meth lab in his garage, although a search of the garage did not turn up any methamphetamine. 49-year-old Craig William Rogers was arrested on suspicion of controlled substance possession, possession of drug paraphernalia and unlawful distribution, manufacturing, and dispensing of a controlled substance. He was released on $15,000 bond. Longmont police officers said they received a tip, including pictures of the meth lab. Rogers was seen leaving the home in a pickup truck and was stopped. He acknowledged that he had meth inside a pipe in the center console of the truck. Rogers also told officers he was making a “healthy meth substance” at his home, because there were acai berries in it, according to an affidavit. Booking documents do not indicate if Rogers has an attorney who can speak on his behalf. (https://rb.gy/fckine)


Father’s Day is Sunday and Apple TV+ will be shining a light on six different fathers around the world with a new documentary called Dads, marking the feature directorial debut of Bryce Dallas Howard. The first trailer for the film has arrived, and in addition to the stories of various fathers around the world, there’s a collection of famous fathers such as Will Smith, Judd Apatow, Jimmy Fallon, Hasan Minaj, Kenan Thompson, Neil Patrick Harris, Ken Jeong, Conan O’Brien, Patton Oswalt, and others.

Spike Lee apologized for defending Woody Allen in the past.(https://pge.sx/3hrb1qV)

“The Wendy Williams Show” has been renewed for a twelfth season that will begin shooting in the fall. (https://pge.sx/3cW0GQt)


A Bloomberg Survey predicts that 25,000 stores could close in U.S. Shopping Malls this summer. (https://bit.ly/3dP5et5)

A newish word that’s come about during the pandemic is “doomscrolling” — the act of reading the seemingly endless stream of upsetting news headlines that emerge on social media in times of distress. The word has become so popular the past couple of months that Merriam-Webster recently flagged it as one of the words it is “watching” but hasn’t yet met its criteria for entry into the dictionary.

A bus on a day-long route across Germany had to pull over when the driver smelled smoke. The passengers quickly evacuated. Firefighters traced the problem to the luggage compartment under the bus: a stowaway had climbed in, and apparently got bored and lit a tobacco pipe.

As the world begins to open, more people are getting on planes. The TSA would like to remind you that you can’t bring these on a plane in your carry-on: Axes and hatchets; bowling pins; canoe/kayak paddles; fireworks; gasoline; liquid bleach; rocket launcher; slingshot; strike-anywhere matches; throwing stars; walking stick.

Another study has concluded that chocolate is good for the heart.

The U.S. almost went to war with Canada over a pig. In 1859, the U.S. almost went to war with Canada because of a pig. Just a few years after the Oregon Treaty was signed to end a border dispute between America and Britain (which still ruled over the area that came to be known as Canada), things got a little heated on San Juan Island where citizens from both countries were located. Historic UK explains that "a pig belonging to the British accidentally wandered onto the land of Lyman Cutlar, an American farmer. When Cutlar noticed the pig eating some of his potatoes he was incensed, and in a fit of rage shot and killed the pig." Despite efforts to resolve the situation between the two men, things spread into the rest of the community and got to the point where the governor of British Columbia sent three warships to the area. The two sides continued to increase their military force over the following month until British Navy Admiral Robert L. Baynes arrived and ended things by stating that he would not "involve two great nations in a war over a squabble about a pig."

A South Indian study found that frog snot could hold the cure for the Coronavirus. (https://bit.ly/370dPqk)

Canadian police say they are investigating an incident of a man who defecated in a display toilet inside of a business. The deuce-dropping episode, police say, happened on Wednesday afternoon at approximately 3:40 p.m. Police added that they were notified by staff at the store that an unknown man had entered the building and did the dirty deed in a display toilet. The suspect has not yet been identified. (https://bit.ly/3e1D0LJ)

In New Jersey, the Winslow Township Police Department went to Facebook on Wednesday to alert residents of two bear sightings, and to warn them against attempting to snap a pic with the grizzly creatures. “Please do not, I repeat, DO NOT attempt to take selfies with the bear,” the department wrote on Facebook, along with other safety recommendations. Black bears are generally not known to be a threat to humans. According to National Geographic, American Black Bears can grow to be five to six-feet long and weigh anywhere between 200 and 600 pounds. The department went on to give advice such as not feeding the bears or approaching the animals. It even recommended families with homes in areas where black bears have been found in the past to have a “Bear Plan” that includes an escape route and planned use of whistles and air horns. (https://bit.ly/2YAdYga)

A Florida man wakes from a 20 year coma and can't believe anything he's told about the last two decades! - FAKE NEWS

Man Fights Off 13-Foot Gator To Save His Dog