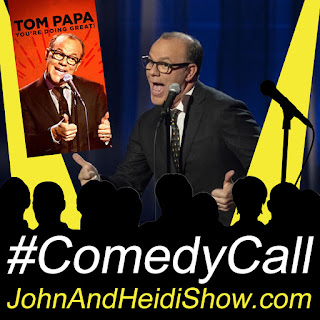 Today we have a #ComedyCall with a VERY FUNNY man, Tom Papa, one of the top comedic voices in the country finding success in film, TV, radio and podcasts as well as on the live stage. Last month he released his second book, You’re Doing Great!: And Other Reasons To Stay Alive. https://amzn.to/3dyApI7

A survey by Trane Residential found that one in four adults have ended a relationship over the air conditioning temperature. (https://bit.ly/3enIEZ2)

Authorities in Texas were called to a family's home when they received an unexpected package containing thirty-two bags of marijuana. The Harris County Sheriff's Office said deputies were called to a Houston home after the residents reported receiving a package they hadn't ordered that was filled with cannabis. "If it is yours please contact the Harris County Sheriff's Office to claim it," the sheriff wrote in an Instagram post. Marijuana is illegal to possess in Texas. (https://bit.ly/3hEAptu)

Actor Danny Masterson (That 70s Show) has officially been charged in the rape of three women between 2001 and 2003. (http://dailym.ai/2UUMJfi)

“Tiger King” Star Joe Exotic wrote a letter to a female penpal in Arizona saying the recent police protests are proof that his case should be reopened. (https://bit.ly/2YMksZM)

After 20 years of trying to prove itself, Segway is finally calling it quits this July, Fast Company reports. When it launched, the two-wheeled scootin’ device was supposed to disrupt urban transport like the car did horse-drawn buggies. Steve Jobs said it was the biggest product since the PC, but at $5,000, no one bit. Inventor Dean Kamen expected up to 100,000 unit sales its first 13 months, but the Segway only sold about 140,000 in its history. Some cities banned Segways for easily spinning out of control and crashing. Kamen sold Segway in 2009 to investor Jim Heselden, who tragically died months later after driving his Segway off a cliff. It was sold again, then again to Chinese mobility company Ninebot.
https://www.fastcompany.com/90517971/exclusive-segway-the-most-hyped-invention-since-the-macintosh-to-end-production

What was the cool thing at a friend’s house that you admired? The in-ground swimming pool? The ping-pong table in the basement? The good snacks? According to a survey of adults, the top sign of a cool house was “good snacks.”

We can all agree on the power of a good (or bad) dad joke. Now you can have dad jokes texted to you every day. Just enter your phone number at TextsFromDad.co (not .com) and be prepared for a daily laugh or groan.

Jupiter's red spot is getting taller and smaller at the same time. Jupiter's red spot is almost as well-known as the planet's remarkable rings. But the spot, which is, in fact, a storm, has been shrinking for a century and a half. Although NASA can't predict what will happen to the storm that was "once big enough to swallow three Earths with room to spare," they do know that it "seems to have increased in area at least once along the way, and it's growing taller as it gets smaller."

Russian President Vladimir Putin suggested that he may run for a fifth Term in 2024. Putin says that hunting for a successor could paralyze Russia’s government at a critical time. (https://bit.ly/3hRxXjv)

A Scottish man was taken to court and fined for calling his ex-girlfriend's new Irish boyfriend a “leprechaun” in a threatening email. 41-year-old Terry Myers appeared in Aberdeen Sheriff Court after he sent his ex-partner an email which made reference to the women's new partner being Irish. Susan Love, a public prosecutor with the ability to impose fiscal fines, said that Myers made “various threats to assault” the woman's new partner in the email. Love additionally said that Myers referred to the new partner as a “leprechaun” in the email. Myers pled guilty to sending a message that was grossly offensive, indecent, or menacing, and that he used offensive or derogatory language to refer to the woman's new partner. The court found that Myers had committed a racially aggravated offense and he was fined £280 ($350). (https://bit.ly/2V72LTH)

Police in Eugene, Oregon say that a man who spent the night perched nude atop a railroad crossing sign attempted to run from police after more than twelve hours on the pole. A K9 police dog caught up with the suspect, who “was actively fighting” the police dog when officers got to them. Police said the suspect put the dog in a headlock and punched it several times. Officers arrested 39-year-old Brandon Lee Jackson for second-degree assault, reckless endangering, first-degree criminal trespass, first-degree criminal mischief, public indecency and second-degree disorderly conduct related to the incident. Police also arrested Jackson on charges of first-degree highway robbery and second-degree assault in connection with an incident early Monday morning. He was also charged with second-degree theft in connection with alleged shoplifting on June 14th at Walmart. (https://bit.ly/311HEpu)

A Clearwater Man was busted for DUI and claimed his cat was driving ….. FAKE NEWS