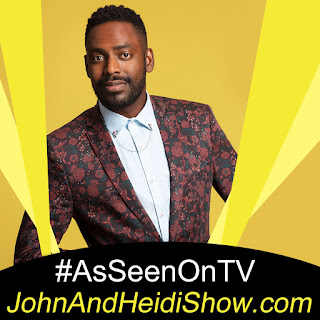 Today on our #ComedyCall we visit with very funny comedian, actor (Grace & Frankie, Mystery Science Theater 3000) and The Great Debate Host, Baron Vaughn. Inspired by Syfy Wire’s live “great debate” panels that took place at comic-cons across the country, Syfy introduces the new late-night TV series The Great Debate. Premiering June 18, the show welcomes a rotating, pop culture-loving celebrity panel ready to embrace their inner nerd for a spirited debate about the most pressing topics in science fiction, fantasy, horror, comics and general geekdom. Each week’s panel will show off their comedic improv chops, don their best geekdom cosplay and debate the hottest questions in the galaxy such as: Who’d be a worse boss, Darth Vader or the Joker? Would Super Mario make a good therapist? Would it be better to have a Green Lantern ring or a wizard wand? After all panelist arguments are presented, host and comedian Baron Vaughn and his wisecracking robot sidekick, DB-8, will make a definitive verdict. The Great Debate is on Thursdays at 11pm ET/PT, only on SYFY


According to a survey, bad breath apparently is the most embarrassing thing that can happen on a first-date.

According to the Clermont Police Department, a Florida man is behind bars after he became violent at an outdoor church service, knocking the pastor and other churchgoers to the ground because he thought the service was too loud. Officers were called on Sunday morning for reports of a physical fight happening at a church service. When officers arrived, they found 34-year-old Alan Cheesbourough resisting the arrest of other officers who had already responded to the scene. Police said Cheesbourough was furiously resisting officers, positioning his hands to avoid handcuffs and swinging his legs so restraints could not be used. Officers at the scene began collecting witness statements from the incident. Cheesbourough was arrested on multiple charges, including disturbing a religious assembly, resisting officers without violence, battery, and possession of drug paraphernalia. He is being held at the Lake County Jail without bond. (https://bit.ly/2YFGBc3)

Stephen King is considering the idea of writing a “Friday The 13th” novel from the perspective of the killer, Jason Voorhees. (https://bit.ly/3hwNghj)

The season finale of the docuseries Disney Gallery: The Mandalorian revealed that Mark Hamill voiced a droid bartender in The Mandalorian’s fifth episode in an uncredited role. Creator Jon Favreau said the droid’s name is EV-9D9, and that he was previously seen torturing other droids in Return of the Jedi.

J-Lo and Alex Rodriguez have found a new backer in their bid to purchase the New York Mets. (https://bit.ly/37G3pMJ)

Elon Musk and Grimes shared their child’s birth certificate to prove that they named the baby “X AE A-XII.” (https://bit.ly/2Y5xO40)

Nathan’s 4th of July Hot Dog Eating Contest is going to take place without an audience this year because of Coronavirus concerns. (https://bit.ly/2BmbSbR)

The NBA has released a 100-page rule-book to play out the remainder of the season in quarantine. There are strict social distancing guidelines. (https://es.pn/2zFsevO)

The word "MacGyvered" is in the Oxford English Dictionary. The original MacGyver series that ran from 1985 until 1992 featured a main character who could fashion pretty much whatever his heart desired with random objects. As a result, we've been using the word "MacGyvered" as an adjective meaning "adapted or improvised in an ingenious or expedient way." And in March 2019, the term was officially added to the Oxford English Dictionary. It only took 34 years!

Well, that’s awkward. An upstart Brooklyn Assembly candidate once mooned a couple who was having sex — and then blogged about it. Emily Gallagher, who is mounting a primary challenge against Democratic Assemblyman Joe Lentol, recounted the strange escapade in a 2003 “Live-Journal” post back when she was a 19-year-old student at Ithaca College in upstate New York. According to the post, Gallagher was visiting friends in Syracuse when she spotted a couple doing the dirty through a window and stopped to watch. When the pair realized they had an audience, Gallagher decided to moon them. The 36-year-old community activist’s other past posts reveal similarly sophomoric behavior. In a separate entry, strewn with misspellings, Gallagher recalls throwing a “homeless party” with some friends in which she dressed up like a hobo and passed around wine concealed in a paper bag. (https://bit.ly/3fvCFkK)

A Boston man led several police departments on a roughly 20-mile car chase through Massachusetts and New Hampshire last Thursday with his five children in the vehicle. At around 11:42 a.m. officers in Plaistow, New Hampshire were told by the Haverhill Police Department in Massachusetts to look out for a blue Honda Odyssey. Police initially reported a man, identified as 29-year-old Alpalus Slyman, had thrown the woman from the car while in Massachusetts, but authorities later noted the woman, identified as Slyman’s wife, had actually jumped out of the vehicle. Haverhill police said that the incident was being livestreamed from inside the suspect’s vehicle. At one point, Slyman claimed his neighbors were spies. He also posted earlier Thursday morning the Coronavirus was manmade and that former President John F. Kennedy faked his death. He was eventually taken into custody without incident and the five children were returned to their mother. (https://bit.ly/3fvt3H1)

A Brevard County man stole seventy-five pool floats so he could have relations with them ….. FLORIDA (https://bit.ly/2J9jGye)