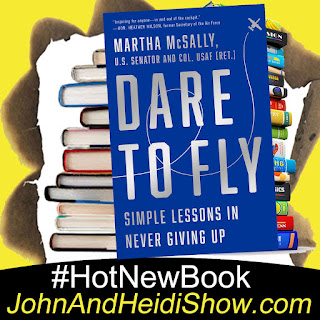 Today we visit with Martha McSally U.S. Senator and Col. USAF (Ret.) America’s first female combat jet pilot and Arizona Senator Martha McSally shows you how to clear the runway of your life by finding opportunity in obstacles, cultivating inner resilience, and succeeding in the face of failure. Martha McSally is a fighter, a survivor, a leader, and a champion of never giving up. In DARE TO FLY, McSally shares inspiring life stories and timeless principles on how to overcome obstacles and adversity. She believes that none of us is born either courageous or afraid, but rather we all possess the ability to see opportunity in obstacles, cultivate inner resilience, and to succeed when others expect us to fail. https://amzn.to/2ZVI0xm

THIS IS YOUR BRAIN ON DRUGS: Brought to you by TimeForRehab.com!
Each day we share stories about people doing dumb things under the influence, but ADDICTION IS NO LAUGHING MATTER! If you or someone you know needs help, we're here! Learn more at TimeForRehab.com.
An internal investigation is underway amid the search for a Chicago inmate, who police say was wrongfully released from jailed after he promised another inmate money to swap identities. Authorities are searching for 21-year-old Jahquez Scott, who was wrongfully released from a Chicago jail. He was being held on a $50,000 bond for unlawful use of a weapon. He allegedly promised 28-year-old Quinton Henderson $1,000 in exchange for his identity. Henderson, originally booked on drug charges, was scheduled to be released Saturday. Instead, Scott used Henderson’s full name and personal information to pose as the other man and leave jail, according to the Cook County Sheriff’s Office. Scott was wearing a face mask at the time. The sheriff’s office was ordered by a federal judge to provide face masks for all inmates who are quarantined for any reason amid the coronavirus pandemic. Jail staff realized something was wrong when the real Henderson came to provide information for his discharge and his paperwork was missing, the sheriff’s office said. An internal investigation was underway Tuesday evening. Scott was being held on a $50,000 bond for unlawful use of a weapon. He was going to be placed on electronic monitoring if he made bond. Henderson is no longer due to leave jail. He was ordered held without bond on charges of violating the bond on his original narcotics case, according to the sheriff’s office. He faces additional charges of helping an inmate escape.
https://www.wvlt.tv/content/news/Chicago-inmate-wearing-face-mask-wrongfully-released-after-identity-swap-570266781.html

Just when you were settling into the comfy, cozy triple-layered streaming blanket of Netflix-Amazon Prime-Disney+ comes a new streaming service — and it’s one you may not want to ignore. Last Wednesday HBO Max launched for $14.99 a month. HBO Max will include 10,000 hours of premium content at launch with TV favorites like The Big Bang Theory, Friends, and The Fresh Prince of Bel-Air, as well as several original shows

According to WarnerMedia chairman and HBO Max head Bob Greenblatt, the infamous Snyder Cut of Justice League “does not exist.” Yet. But as was revealed last week, HBO Max is going to be providing funding so Snyder can make a finalized version, and one report claims the new streaming service will be spending close to $30 million to make that happen.

Half of us plan to continue our new-found habits and activities in life after lockdown — including creating podcasts, online fitness classes and walking more often. In the survey of adults, 43 percent feel they have “changed their ways for the better” and plan to continue with their improved behaviors even after restrictions are lifted.

A favorite summer food is fresh corn on the cob, smothered in butter and salted. While it can’t possibly taste anything like the real thing, Pringles is introducing Sweet Corn flavor. The chips incorporate the flavors of sweet and salty fresh corn, cooked corn, and creamy butter.
https://www.instagram.com/p/CAWUfd7lmMa/?utm_medium=radio

A bull named Ron was the cause of a power outage in a town in Scotland. The owner of the bull wrote on a local Facebook group: “Our bull Ron would like to apologize to everyone … for causing last night’s power cut. He had [an] itchy bum so [he] scratched it on the electricity pole and knocked the transformer box off.”

A company in the Middle East called Geometry has come up with a device that slides across shopping cart handles, dispensing a thin layer of disinfectant for between-use cleaning. The company first conceived the product in 2015 but is retooling the concept for mass production.


If you’ve been working from home or furloughed, it’s possible your car hasn’t moved from its parking spot in weeks — or months. Auto experts say before you hit the road again, check your tire pressure.

Guinea pigs were once sacrificed wearing earrings and necklaces and wrapped like sushi. Lidio Valdez, an archaeologist from the Institute of Andean Studies, made a surprising discovery in Peru when he came across 100 dead guinea pigs that had been sacrificed by the Incan people during the 16th century. The rodents, which had clearly been a part of some sort of ritual, were adorned with earrings and necklaces made from colorful string. "Some were even wrapped in cotton rugs like a sushi roll," wrote Gizmodo of the findings, which were published in the International Journal of Osteoarchaeology in 2019.

Dateline.... CHINA
A burglar in China broke into a restaurant, carrying off more than 33 pounds of pig ears and pig tails and about 75 pounds of cooking oil.

A Georgia man has been charged after lying to his employer about testing positive for COVID-19. 34-year-old Santwon Antonio Davis of Morrow is charged with defrauding his employer by allegedly faking a positive Coronavirus medical excuse letter, causing his employer to stop business and sanitize the workplace. Davis has since admitted that he never had COVID-19. According to U.S. Attorney Byung J. Pak, Davis was employed by a Fortune 500 company at a facility in Atlanta. He lied and said he contracted the Coronavirus, then submitted a fake medical record to his employer. Out of concern for its employees and customers, the corporation closed its facilities for cleaning and paid the employees during the shutdown. The incident caused a loss of more than $100,000 to the corporation, along with the unnecessary quarantine of several of Davis’ coworkers. (https://bit.ly/3gvXgH0)
MOMENT OF DUH: Brought to you by InsuranceChicken.com

A Florida Woman was arrested on Saturday for “spitting on groceries during the COVID-19 pandemic,” according to police who say the suspect also threatened to beat up customers at a Publix supermarket. Investigators say that 58-year-old Sharon Turpin caused a disturbance inside and outside the store in a suburban Tampa mall. Turpin had previously been trespassed from the Largo Mall in 2014. Turpin, cops say, was spotted Saturday spitting on merchandise at Publix, where she also threatened to beat up customers in a store bathroom and argued with a manager. When police subsequently located Turpin outside Publix, she allegedly provided them with a false name and date of birth. She was subsequently identified and booked into jail on a pair of misdemeanor charges. Turpin is locked up in lieu of $400 bond. Arrest affidavits do not indicate how much damage Turpin caused during her spitting spree at Publix. (https://bit.ly/2LWVOQ7)
FAKE NEWS.... OR FLORIDA?!
I read a headline, you guess if the story is something that really happened in the great state of FLORIDA or is it #FakeNews made up to trick you and amuse me
A Jacksonville woman stole a police cruiser because she was late to work.
FAKE NEWS
GOOD NEWS: Brought to you by #GiftCardChallenge GiftCardChallenge.org