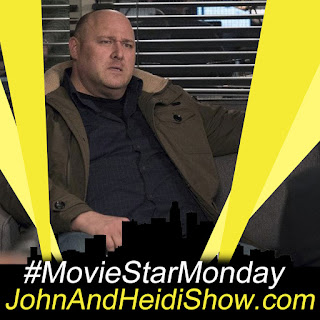 It's another #MovieStarMonday this time we chat with Will Sasso the ABC series premiere of UNITED WE FALL… debuted on Wednesday, July 15th.


A survey by the Ocean Online Shark Tracker found at least three sharks swimming on the coast of the Jersey Shore. (https://bit.ly/3fpf061)

A drunk Ukrainian man ended up in the hospital after he tried to prove his bar boasting by climbing to the roof of the bar to do a belly flop into the dumpster. He made it but needed a few stitches.

“Tiger King” star Carole Baskin is trying to shut down a South Carolina Zoo for not following protocols. PETA designated this the worst roadside zoo in America. (https://bit.ly/3iV33XQ)

Apple’s WWII drama Greyhound, starring and written by Tom Hanks, has become the largest opening-weekend release ever for Apple TV+. … Apple’s not revealing much about viewership, but it does say that 30 percent of Greyhound’s viewers were new to the service.

CBS is no longer planning to air Survivor Season 41 this fall. Production on the season, which will take place in Fiji, was delayed back in March due to the coronavirus pandemic. According to Variety, CBS and officials in Fiji are still evaluating the best time to start production due to the heightened health and safety concerns involved.

Crafty cats coax their owners into giving them extra food and attention by using a special purr. Scientists (University of Sussex) said manipulative cats use a “soliciting purr” which has a similar frequency to a human baby’s cry. It is thought that this higher-pitched sound triggers a subconscious sense of urgency in the owner, making them give the cat whatever it wants.

Two men in a small city in China were fined after their raucous mahjong session woke up neighbors.

A CDC study found that a Chinese Woman infected seventy-one people with Coronavirus during a sixty second elevator trip at a Hospital.(https://bit.ly/2WhRCjn)

On her Facebook talk show Jada Pinkett Smith admitted to having a relationship when she and Will Smith were separated.

A Passaic, New Jersey woman survived a one mile ride through the city’s sewers after being sucked into storm drain during a flash flooding and being spit out into a nearby river. She’s okay. (https://njersy.co/2DEa8Mu)

Social media users have been sharing a video in which a man claims that a metal strip in medical masks is a 5G antenna. Just so you know, this is false. VIDEO - https://www.facebook.com/makedahboyce/videos/10223190303485787/

A U.S. town had a 3-year-old mayor. In the small town of Dorset, Minnesota, where a new mayor is picked every two years by drawing names out of a hat, a three year old named Robert Tufts was elected mayor in 2015. His governing style: "Being nice and no poopy talk."

According to a local report, an Italian woman driving a Ford Focus down a coastal highway received a ticket for going hundreds of miles an hour over the limit after a speed camera malfunctioned and police failed to pick up on the error. The camera recorded her speed at 703 kmph, or almost 437 mph, according to a translation of an article on the Italian car site “Autoappassionati.” That’s closer to the speed of an airliner than it is to a race car. The version of the Ford Focus available in Europe can reach a top speed of 155 mph. The Autoappassionati report said local police failed to double-check the camera’s findings before mailing the woman a ticket – which placed 10 points on her license and carried a fine of 850 euros, or just under $1,000. Giovanni Strologo, a transportation spokesman for the community of Offagna, in Ancona province, where the incident happened, advised the driver to appeal to the local government for compensation. (https://fxn.ws/32doGwG)

In England, the decision to put a parking ticket on a bus during a layover at a stop has been called “absolutely ridiculous.” The driver of the 44 service was issued the ticket in Market Harborough, Leicestershire, on Monday morning. Centrebus operations manager Mick Rossitor said it was “a slap in the face” for drivers who continued to work throughout lockdown. Leicestershire County Council said the notice “was issued as the bus appeared to be parked up and unattended.” Mr. Rossitor said Centrebus had operated the 44 route from Foxton to Fleckney on behalf of the county council for several years. As part of the council timetable, the service requires a 20-minute layover in Market Harborough before resuming the service. Centrebus is appealing against the ticket. (https://bbc.in/3iFWdFL)

The brother of an Arkansas mayor was arrested Monday night for allegedly stealing a car with two children inside. Darrell Lamont Scott — brother of Little Rock Mayor Frank Scott Jr. — hopped into the car as the engine was running in the parking lot outside Baptist Hospital. “Don’t worry, I’m the mayor’s brother,” 31-year-old Darrell told the children’s parents after grabbing one of the kids’ cellphones to speak to them after the abduction. Scott is accused of driving with the kids to McCain Mall in North Little Rock, where he was later arrested in the parking lot. Mayor Scott addressed his sibling’s arrest in a statement posted to Twitter. “This is an extremely difficult season in the life of my younger brother,” he wrote. We are seeking medical and professional help as he manages this crisis. (https://bit.ly/2VZYkKF)

A Pensacola Man was arrested for fondling himself in public and asked a cop if he could squeeze the officer's rump ….. FLORIDA (https://bit.ly/2OaGVh4)