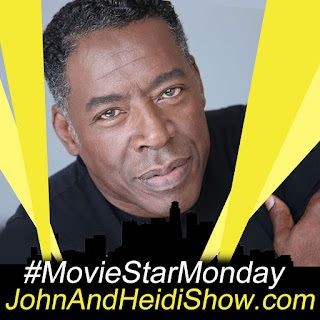 It's another #MovieStarMonday this time we chat with Ernie Hudson about hi program on BET+ and we'll ask a little about the NEW GHOSTBUSTERS MOVIE that's coming out next year!

A study by Colorado State University found that women are less likely to date a man who has a cat in his profile picture. (https://cbsloc.al/2Yue8XY)

An Indiana man whose truck was seen weaving early Sunday was charged with his twelfth drunken driving offense. 55-year-old Jeffery A. Sanders told a Wisconsin State Patrol trooper he was traveling from Minnesota to Indiana and that he had “a couple of beers” just before driving. Two troopers patrolling together stopped Sanders after seeing his pickup truck weave in the far-right lane of the interstate, cross the fog line, and then go into the center-left lane. The complaint states that Sanders’ speech was slurred and he smelled of alcohol. The troopers found a bottle of whiskey, a half-consumed beer and marijuana in Sanders’ truck. All but two of Sanders’ eleven prior drunken driving convictions were in Indiana. The most recent, in 2018 and 2019, were in Texas and Minnesota. (https://bit.ly/2BNzXIW)

Mike Tyson says he called Jaime Foxx to tell him what to focus on when he plays him in an upcoming biopic. (https://bit.ly/2NpxsyW)

“Game of Thrones” author George R.R. Martin says quarantine is helping him finish the newest book in the series, “Winds Of Winter.” The book is expected to come out in 2021. (https://bit.ly/3dqPMlT)

Dr. Anthony Fauci says people should stop going to bars in order to stop the spread of the Coronavirus. (https://bit.ly/2NNC42m)

The United States has bought nearly the entire global supply of Remdesivir, the anti-viral drug that can speed the recovery of patients infected with the Coronavirus. (https://bit.ly/3ePoEPh)

Chinese Researchers have discovered an infectious form of swine flu in pigs that has the potential to become a pandemic. (https://bit.ly/2CP1kTq)

The “Parler” social media app has doubled its users in less than a week and now has two million accounts, as many continue to leave Twitter over claims of censorship. (http://dailym.ai/2BRlCLK)

The Apollo astronauts' footprints on the Moon could stay there for 100 million years. When the Apollo astronauts walked on the surface of the moon, they left behind footprints that will remain there for a very long time. Due to the fact that there is no atmosphere on the moon and therefore no wind or water to blow or wash anything away, Arizona State University scientist Mark Robinson told Space that traces of the Apollo exploration could last between "ten and a hundred million years."

North Korea is threatening to create a, quote, “sensational event” that will lead to the destruction of America. (https://bit.ly/2Z4Y4dY)

A Florida man reportedly stole, crashed, and then abandoned a yacht worth almost $1 million in March, evading police for three months before being arrested last week. The nautical no-gooder, 28-year-old Donovan Russell Jester, stole the boat from a dock in St. Petersburg, Florida, then left it after crashing it into channel-marker pilings. The boat then drifted into a nearby oyster bed, where it was discovered by local deputies. They were able to identify Jester by a thumbprint left on the cabin door. He was charged with grand theft vessel for the joyride, and faces up to thirty years in prison. The stolen yacht was identified by authorities as a 46-foot Jeanneau Leader worth $900,000. (https://fxn.ws/2AdE68I)

A man was arrested as he walked through the Bronx on Thursday allegedly carrying a grenade launcher and wearing a bulletproof vest. 23-year-old Edison Cruz was in the University Heights section of the borough when police happened to notice the weapon strapped to his back. Cruz was by Andrews Avenue and 179th Street at the time he was spotted. Police then got a warrant to search the man’s apartment, which was nearby, and found a shotgun, firearm receivers, drill bits, manufacturing tools, a firearm manufacturing template, a shotgun barrel and stock, a hatchet, and glock parts. Cruz has been in custody since Thursday night, but charges are still pending. According to police, he faces charges including criminal possession of a weapon and violation of local law. (http://dailym.ai/3dMrIud)

A Conch Key Restaurant Worker was arrested after he stripped naked, chased his co-workers with a knife, and then passed out drunk in the manager’s office ….. FLORIDA (https://bit.ly/2RGA3G4)

Man Hands Out Free Coffee To His Neighbors Every Morning -- From His Kitchen Window
https://www.sunnyskyz.com/good-news/3853/Man-Hands-Out-Free-Coffee-To-His-Neighbors-Every-Morning-From-His-Kitchen-Window