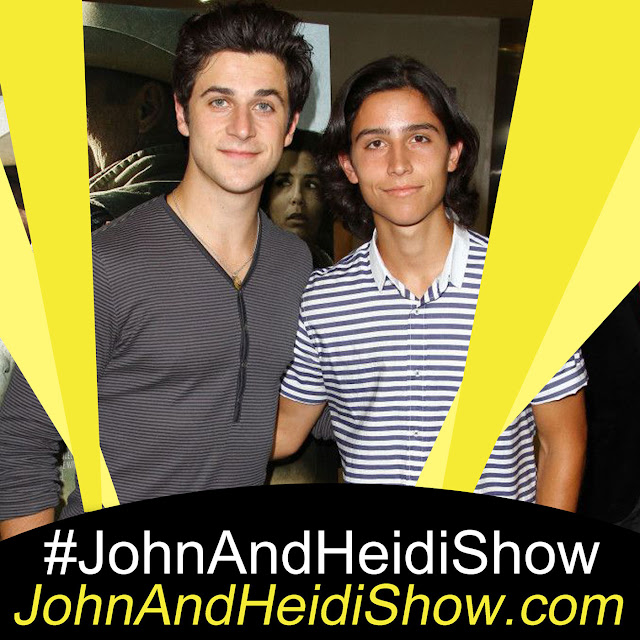 Today we visit with actors and brothers David Henrie and Lorenzo Henrie about their new teen romantic comedy, THIS IS THE YEAR executive produced by Selena Gomez, who joins them for a special premier event TODAY at 4:30pm PT / 7:30pm ET. Tickets at ThisIsTheYear.film

According to a new survey of 3,000 Americans, 57% of respondents say they are now much more aware of their own bad breath thanks to wearing a face mask. (https://bit.ly/3kFkM6I)

A Kentucky man has copped to trying to sell his girlfriend’s child for $2,500 outside a convenience store. According to police, a tipster called 9-1-1 around 1:20 a.m. on Sunday to report that a male suspect approached two individuals and offered to sell them the four-year-old child. Witnesses provided Kentucky State Police officers with the license plate of the suspect’s white Nissan, which led them to a home about five miles away. Inside, they found the child, his 26-year-old mother Gertrude Hinson, and 29-year-old Harry Day. During questioning, Day and Hinson reportedly admitted to using methamphetamine earlier in the day. A search of the residence turned up meth and drug paraphernalia. Additionally, Day had visible track marks that were still bleeding. Day was arrested and charged with promoting human trafficking, DUI, and two vehicular counts. Hinson was charged with meth possession, endangering the welfare of a child, and possession of drug paraphernalia.(https://bit.ly/2QeNnSm)

A Judge has ordered TV host Tavis Smiley to pay $2.6 million dollar to the Public Broadcasting Service for having multiple affairs with his subordinates that led to the cancellation of his show.(https://bit.ly/3j0tx9x)

“Glee” star Lea Michelle has given birth to her first child, a son, with her husband Zandy Reich. (https://pge.sx/2FU7EL2)

Seal has told friends that his ex-wife Heidi Klum (AGT) has a hidden agenda to permanently move their kids to Germany.(https://pge.sx/2Er7VnW)

An investigation found that Cook County State’s Attorney Kim Foxx engaged in substantial abuses to let Jussie Smollett off the hook for staging a hate crime.(https://pge.sx/2Q5gjfz)

A new report claims that underage teens have been having “digital sex parties” on the Roblox online gaming platform that allows them to make characters do whatever they want. Roblox is getting tons of calls to cancel this from parents. (https://bit.ly/2QbYQC1)

California has confirmed its first case of the plague in five years after a Lake Tahoe Man was bitten by an infected flea while walking a dog. (https://bit.ly/3gmZcAE)

Massachusetts police are looking for a masked man who was giving strangers “COVID hugs” at a Walmart. (https://bit.ly/3laPqoH)

Latin America has flowers that look like lips. There's a flower in the rainforests of Central and South America that resembles a puckering mouth covered in lipstick. It called Psychotria Elata, and it nicknamed Hooker's Lips!

China has launched a campaign to end food waste, urging citizens to eat everything on their plates. (https://bbc.in/3fUV6PQ)

All-day breakfast is one thing, but apparently all-day lunch is going too far. A woman in Ohio was reportedly arrested after causing a disturbance at a Burger King, allegedly because she was unable to order lunch items during breakfast hours. The incident occurred around 9:00 a.m. on Monday at a Burger King in the town of Bucyrus. The restaurant was still serving its breakfast menu at the time and was apparently unable to offer lunch options. The woman nevertheless became upset. She then began yelling and cursing at the restaurant’s employees. Despite the outburst, the workers were still unable to provide the lunch items that the woman requested. Authorities were notified of the disturbance and located the woman in a nearby area. They then discovered she had a warrant out from a previous incident. (https://fxn.ws/31LjNJB)

Nicole Paris’s son and a friend had gone for a long bicycle ride when they got tired on the trip home. So, the boy called his mother for a lift back to their Pennsylvania residence. But when 34-year-old Paris reached the children, she realized that her car was not big enough for the juveniles and their bicycles. So, cops say, Paris “came up with the idea” to place a towel in the car’s rear hatch, which then would serve as a towline for the children to hold onto while sitting atop their bikes. However, as described in a criminal complaint, Paris’s invention failed miserably when her son “lost his grip” on the towel and fell off his bicycle. The boy’s friend then proceeded to run over his pal with his bicycle. During a police investigation of the June 23rd incident, Paris’s son “stated he wanted his mother charged and he would testify in court to this incident.” Paris was charged with two misdemeanor counts of endangering the welfare of children. She was also charged with allowing the minors to hang onto a moving vehicle.(https://bit.ly/33W0ksq)

A Winter Springs Mother served as the lookout and getaway driver for her 15-year-old son who robbed a convenience store at gunpoint ….. FLORIDA (https://bit.ly/36BvWkv)