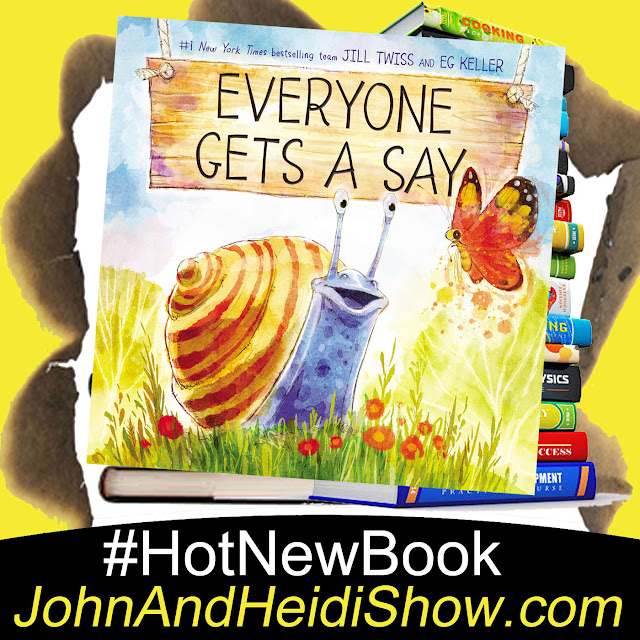 She’s also the #1 New York Times best-selling author of Last Week Tonight with John Oliver Presents: A Day in the Life of Marlon Bundo and The Someone New

Jill’s new book Everyone Gets a Say, offers children a timely message about the importance of voting and democracy. https://amzn.to/2EvL5vH

Police in England were called after a Range Rover crashed in Ironbridge on Saturday night. Officers said the vehicle was missing a wheel that was found one mile away from the crash site. Telford Cops shared photos on Twitter, which showed the Range Rover with major damage to its front passenger side where the wheel was missing. On the back of the car was a bumper sticker which said “I'm not drunk, just avoiding potholes.” West Mercia Police said a man was arrested and charged with “driving with excess alcohol in his breath after blowing double the drink driving limit in custody.” (https://bit.ly/3lcuVbf)

Kendall Jenner and Hailey Bieber were spotted on a Malibu Beach. (https://pge.sx/34vwpHQ)

A judge has sealed transcripts from the hearing over Britney Spears’ conservatorship, denying the public knowledge of who’s in charge of her finance. (https://yhoo.it/3hh2BSG)

L.A. Mayor Eric Garcetti ordered the city to shut off the power at the Hollywood Hills party house of TikTok Star Bryce Hall after he repeatedly violated lockdown orders. (https://cbsloc.al/2EeyaOB)

Tanya Zuckeroff, the woman who created the F-Factor Diet, is denying rumors that her weight loss plan causes severe side effects. Her protein bars cost $30 for a box of twelve. (https://pge.sx/3gbJRCB)

San Francisco is being plagued by a group of homeless people that have been going to the bathroom near the Dome of Eateries. (https://bit.ly/2Eo3n1D)

Elon Musk announced on Twitter that he plans to unveil his Neuralink Brain Chip this week. (https://bit.ly/3httq64)

Cows don't like Willie Nelson. Here's a funny fact for you: A dairy cow will produce up to 3 percent more milk when listening to music. But they don't like country music, especially Willie Nelson. They need something with a good beat.

The Lindt Chocolate Factory had a malfunction in its ventilation system that covered the small Swiss town of Olten in Cocoa Powder. (https://bit.ly/3hd2I1n)

A New Jersey man was arrested for allegedly hosting a massive house party in Alpine that was attended by hundreds of people, most of whom were not wearing masks and were ignoring social distancing protocols during the Coronavirus pandemic. 45-year-old Tashay Knight was charged with “recklessly creating a risk of widespread injury or damage.” He was also issued multiple summonses, including one for violating the governor's executive order that mandates hosts to require that their guests wear face coverings and practice social distancing. The August 1st party, which drew an estimated 300 to 400 people to an Alpine mansion, was disbanded by police at 10:00 p.m. after they received noise complaints from local residents. Authorities said it took three to four hours and several local law enforcement agencies to clear all the attendees from the party. (https://bit.ly/2DY3HED)

A Florida woman has been accused of shooting and wounding one woman, and threatened another following a confrontation outside a grocery store. 61-year-old Renata Gloria Ray of Greenacres was arrested Sunday afternoon shortly after the shooting outside a Lake Worth Publix. She was charged with attempted murder and aggravated assault with a firearm. According to an arrest report, Ray was exiting the Publix with groceries when she told a younger woman and man to move out of her way. The two women began to argue, and Ray eventually pulled out a gun. As another woman was leaving the Publix, deputies said Ray yelled at her and demanded to know what she was looking at. The other woman began taking pictures of Ray with her cellphone, prompting Ray to shoot the woman in the foot. Ray left the scene in a car, but was pulled over and taken into custody within minutes. (https://bit.ly/2DQ9RpZ)

A Broward County Man brought a tiger into a grocery store and later told police it was his therapy animal ….. FAKE NEWS