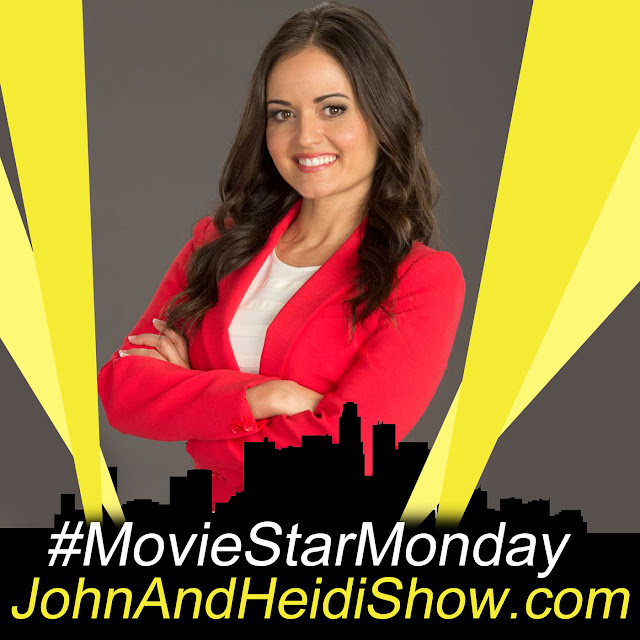 It's another #MovieStarMonday this time we chat Danica McKellar. Best known for her roles on The Wonder Years and The West Wing, Danica McKellar is also a three-time New York Times bestselling author, internationally-recognized mathematician and advocate for math education - and now a new mommy!

A survey by Crispy Green found that four in five parents are CONSIDERING homeschooling their kids this year. (https://bit.ly/3i2vK3O)

An Australian strip club owner could be fined for breaching COVID-19 social distancing after being found at his club with four other people on his birthday. Michael Trimble and his friends were found by police at the “Showgirls Bar 20” strip club in Melbourne on Saturday night, but his lawyer said they weren't having a birthday party. The club owner's lawyer Sazz Nasimi said his client was conducting a job interview with another woman when three people arrived uninvited with a birthday cake. Mr. Nasimi said Mr. Trimble is well aware of the current health restrictions, including social distancing. The incident came just one day before Victoria went into stage four lockdown after declaring a state of emergency due to increasing coronavirus cases. The lockdown includes a curfew from 8pm to 5am for up to five million Melbourne residents and restrictions on essential activities including exercise and grocery shopping.(http://dailym.ai/3klskLM)

The trailer for the Saved By The Bell revival has been released, and it’s drumming up nostalgic feelings for fans of the original teen TV sitcom. The reboot, which is set to debut on NBC Universal’s new streaming service Peacock, released its first full trailer Monday. https://www.youtube.com/watch?v=JNJN5HMkRao&feature=youtu.be

Chris Pratt and wife Katherine Schwarzenegger are now proud parents of a baby girl. The new addition is the first for Katherine and the second for Pratt, as he has a seven-year-old son, Jack Pratt, from his previous marriage to actress Anna Faris.

The price of a gallon of gas is expected to remain low through the end of the year.

Two Michigan boys found a wallet stuffed with more than $500 in cash — and rather than keep it, they turned it in to police. The Wayland Police Department announced in a Facebook post that it was making the boys, Logan Mishoe, age 14, and Austin Nichols, age 13, honorary “Citizens of the Day” for their good deed.

The less satisfied people are at work the more likely they are to lie to others at the office. That’s according to a recent survey (from Simply Hired) of more than 1,000 people. 41 percent said they are not satisfied at work and said they tell at least one white lie a week — which is more than those who are happy at work.

… And the most common lie? The kind that buys time away from colleagues, like “I’m not feeling well” or “I already have plans after work.”

A Japanese man sustained serious injuries when a small dog fell on him from a ninth-story apartment. Police say the man was walking down a street when the dog lost its balance on a windowsill and hit him in the shoulders. The man sustained back injuries. No word on what happened to the dog.

Job applicants who drink alcohol are perceived as less intelligent and less hireable by American employers.

In Canada a landlord removed the windows and doors when the mom living in the home was late with rent.

A Massachusetts hotline set up to enforce Coronavirus safety guidelines instead received profanity, fake reports, and porn from residents fed up with the rules — similar to what happened in April when New York City launched a similar effort. It didn’t take long for things to go downhill for Governor Charlie Baker’s compliance hotline. In just a matter of hours, there was a picture of a penis from an account dubbed, “Good German,” missives slamming the hotline as a “rat line,” complaints about “unmasked dogs” and gripes about Baker’s lack of a mask during news conferences. Overall, the bogus messages amounted to dozens out of more than 900 reports. A similar effort in the five boroughs of New York earlier this year saw an influx of crank complaints including “d–k pics,” people flipping the bird, photos of extended middle fingers, and Mayor Bill de Blasio dropping the Staten Island groundhog. (https://bit.ly/3iC2KAz)

A New Jersey man has been arrested after making terroristic threats to a Costco cashier during an aggressive rant, as seen in video footage that has since gone viral. NJ.com reports that William Commauf was arrested on Wednesday by Stafford Township Police following the July 29th incident. As seen in a TikTok clip, Commauf cursed at a female Costco employee at checkout, ordering her to “shut up and ring up my stuff.” Out of the frame, someone asked for backup from a manager. He proceeded to say lewd and inappropriate things, such as "You're an old hag, you're an old ugly hag. Ring it up, you old hag.” Following an investigation, Stafford police identified Commauf as the disgruntled customer and arrested him without issue on Aug. 5th. The Costco shopper has since been charged with terroristic threats, harassment, and disorderly conduct. He was taken into custody at Ocean County Jail. (https://fxn.ws/3gKBz5J)

A Pinellas Park McDonald’s Worker on probation for cocaine possession was arrested for dousing a customer with a large soft drink during a dispute at the drive-thru window ….. FLORIDA (https://bit.ly/2Y1lin9)