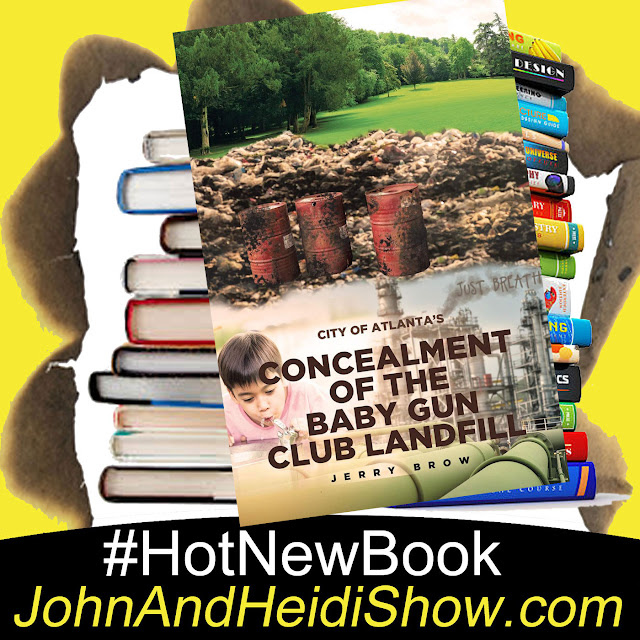 Today we visit with Jerry Brow, the Erin Brockovich of Atlanta. He has an AMAZING story of perseverance -- as he had to fight the city when it was found the home he bought was built on an illegal toxic waste dump. He shares the story in his new book: City of Atlanta's Concealment of the Baby Gun Club Landfill. https://amzn.to/3iCUJLy

An international coalition of scientists are developing a pill that can cure loneliness. (https://bit.ly/2C5vD8p)

A 43-year-old South Dakota man who went into a Lincoln, NE bank in December with an empty Coors Light box and pointed a gun at two tellers has been sentenced to seven to ten years in prison. Cody A. George of Sioux Falls pleaded no contest to terroristic threats and use of a firearm to commit a felony. “This was not a planned robbery,” deputy Lancaster County Public Defender Todd Molvar said at George's sentencing Tuesday. “This is something that just happened.” George made a brief statement, apologizing to the court and to the victims for his behavior. In the end, Lancaster County District Judge John Colborn said he couldn't ignore the serious nature of the crime, and he sentenced George to the prison time. Because of a mandatory minimum on the gun charge, George will have to serve six years before he's eligible for parole. (https://bit.ly/30uXAjp)

A new Knight Rider movie is in the works, based on the series which ran on NBC from 1982 through 1986 and launched actor David Hasselhoff to stardom. The show followed a police detective named Michael Knight who fought crime with the aid of KITT (Knight Industries Two Thousand), a high-powered Pontiac Firebird that was basically indestructible.

The Tax Collector, a crime thriller starring Shia LaBeouf and George Lopez, is the No. 1 movie at North American theaters. With most cinemas still closed due to the coronavirus pandemic, the film scored the top spot with $317,000 in sales at 129 theaters.

A study finds consumers devote more time researching a car or refrigerator purchase than they do a doctor or health plan. The study found while consumers are willing to research costs, they invest less effort in it than for their other purchases.

A fox in a leafy suburb of Berlin, Germany, has been getting into the spirit of summer by collecting flip flops. For weeks residents were baffled that a thief was stealing their flip flops and other shoes from their yards and gardens at night. Finally a man spotted the culprit carrying two blue flip flops in its mouth. The fox had a collection of over 100 shoes. https://twitter.com/FHackenbruch/status/1287500805633974272

Scientists are reminding some social media users that the ability to curl your tongue is not the indication of the presence of a dominant gene.

A new ranking by Forbes puts Addison Rae Easterling at the top of the earning chart on TikTok. Forbes estimates she made around $5 million over the past year (ending in June). Her burgeoning empire includes soon-to-launch makeup line Item Beauty, an exclusive podcast deal with Spotify, and a pact to serve as the chief global spokesperson for American Eagle.

A veterinarian in Germany who operated on a dog to remove what was thought to be a tumor found undigested underwear instead.

A British mom has gone viral after sharing her unique method for keeping all the expensive plants in her garden looking green and full of life all of the time. Gail Woollaston decided to “revive” her dead plants right before her children’s eyes. To do it, she visited her nearest hardware store and purchased some green spray paint. Care to guess what happened next? She shared her little trick on Facebook, where she soon went viral. https://www.mirror.co.uk/news/weird-news/mum-leaves-kids-stitches-trick-22493743

Authorities in Brazil are looking for a pair of prison escapees. The men slipped out unnoticed after their wives smuggled women’s clothing and makeup to them during a weekend visit. Prison officials are still trying explain how two women went in and four went out without anyone catching on.

A Miami Gardens Woman was arrested after she filled her daughter’s baby bottle with vodka and snuck it into a courthouse for a hearing ….. FAKE NEWS