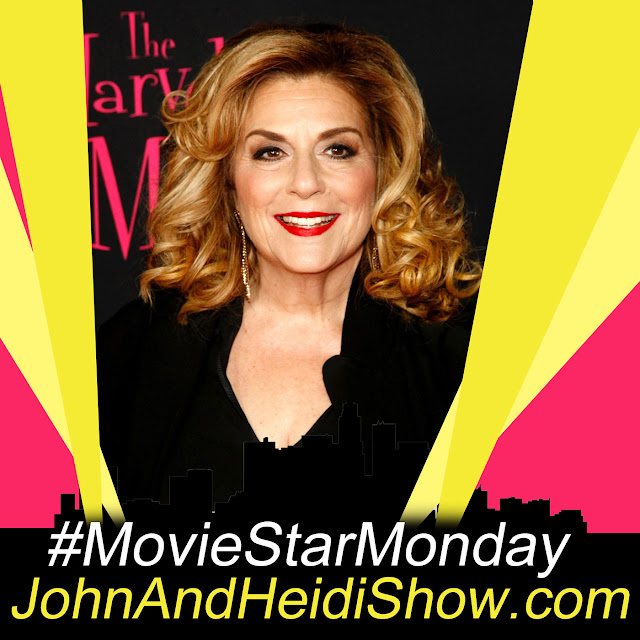 It's another #MovieStarMonday this time we talk with SAG Award-winning actress Caroline Aaron. She can currently be seen reprising her role as 'Shirley Maisel' opposite Rachel Brosnahan, Tony Shaloub, and Alex Borstein in season 3 of Amazon/Amy Sherman-Palladino's Golden Globe, SAG Award and Emmy-Award winning comedy "The Marvelous Mrs. Maisel".(https://amzn.to/3baVCsa)

Caroline also stars as the two main leads in the upcoming feature film CALL WAITING (releasing Labor Day weekend on Amazon). A fantastic "story within a story", the film is adapted from a play of the same name written by Dori Fram which earned four Drama-Logue Awards and an Ovation nomination from two productions in Los Angeles, for which Caroline also starred in. Dan Bucatinsky ("ABC's "The Baker and the Beauty" and "Scandal") also writes and produces, Jodi Binstock (ABC's "Boy Meets World") directs, and Don Roos (SINGLE WHITE FEMALE, BOUNCE and "Younger") and Susan Dietz (Tony Award-nominated TopDog/UnderDog and Fela!) executive produce.

She has appeared in over a hundred box office hits, including "Hello, My Name is Doris", "21 & 22 Jump Street", "Beyond The Sea", "Just Like Heaven," "Nancy Drew," "Sleepless in Seattle," "Edward Scissorhands" and many more.

GET A FREE TRIAL OF AMAZON PRIME TO WATCH FOR FREE

A surprising new study finds that giving toddlers screen time on electronic devices will help with their attention span. (https://bit.ly/2Enp2XZ)

A Florida woman screamed the names of celebrities while she was arrested after a deputy caught her driving 90-miles-per-hour in a 35-miles-per-hour. According to the Monroe County Sheriff’s Office, 38-year-old Reena Patel Sanders was driving a Lexus SUV when a deputy saw her speeding down US-1 after midnight on Monday, Aug. 17th. The deputy turned his lights and siren on, but Sanders didn’t stop. She almost crashed after turning left and fishtailing. Eventually, the deputy boxed Sander’s car in and held her at gunpoint. Another deputy got to the scene and tried to help the first deputy in removing Sanders from the car. She resisted arrest and kept pulling away, screaming “names of famous actors.” A “small amount” of marijuana-laced candies were found in Sanders’ SUV during a search. She was taken to jail and charged with fleeing and eluding, reckless driving, DUI, resisting arrest and possession of a controlled substance without a prescription. (https://bit.ly/2EfXrYr)

Sofia Vergara tweeted that she’s not a victim after fans accused Ellen Degeneres of making fun of her accent during an episode on her show. (https://pge.sx/31kn7MK)

Carole Baskin says she fears for the big cats at the shuttered Tiger King Zoo. (https://pge.sx/31cJVxI)

Are Americans ready to see a movie? Friday we saw a few new movies hit the big screens! The New Mutants and The Personal History of David Copperfield. The New Mutants was expected to bring in close to $8 million. Bill & Ted Face the Music was pushed to VOD.

In the classic TV sitcom Cheers the number 75 played a small part in every episode. How? Answer: That’s the legal capacity of the bar. It’s in a notice posted over the door.

No matter how hard you try, sometimes you just can’t fall asleep when you want to. But this scientifically supported method might be one of the simplest. Body temperature plays a big part in falling asleep. Having a high body temperature can make you feel more alert. When it’s bed time, your body tries to cool down before you go to sleep. One trick: sticking your foot (or feet) out of your covers to help your body release some heat. The bottoms of your feet are hairless, and they have special vascular structures to help regulate heat loss.

A man in England called police when he noticed a ladder had been tilted up against his window at 11:30PM. As he was on the phone with emergency dispatchers, he peeked out his window and saw two men getting ready to climb up to his window. But they had stopped to talk first. So the man opened his window and quickly pulled the ladder in, giving them nothing to climb. Police are looking for the men.

To the delight of grownups everywhere, a study has proven what we suspected all along: drinking alcohol can help us creatively solve problems. To test this, the authors gave the participants some bagels and a couple of vodka-and-cranberries, and then had them solve puzzles. The results: Study participants were better at solving the puzzles after the cocktails. So next time you feel stuck on a problem, go ahead — have a cocktail.

In Texas it's illegal to swear in front of a corpse!

The Indonesian island of Bali will remain closed to foreign tourists until the end of the year due to Coronavirus concerns. (https://bit.ly/3aT4UZG)

A Pittsburgh Public Schools' board member forgot to turn off her camera before getting in the shower during a live virtual meeting Wednesday. Veronica Edwards was seen undressing and getting into the shower during the district’s live-streamed public agenda meeting. Edwards is a Pittsburgh Public Schools graduate and worked thirty-seven years at the district before retiring. In a written statement, Edwards said she regretted the incident, but remains “committed, resolved and focused on her responsibilities to educate all children.” Her statement goes on to explain that during that due to the challenging time of virtual meetings, she had experienced a larger demand on her time, which lead to attempts of multitasking during some of the meetings. It is unclear how many people viewed the live incident, but the recording of the meeting has been edited to remove the showering incident. (https://bit.ly/32m6b7J)

An Ohio woman was arrested after she followed a Butler County deputy for eleven miles in a stolen car. A sergeant was headed to work in a marked patrol car around 7:00 a.m. Sunday when he noticed a car following him. The driver matched the sergeant's turns into a parking lot, where the sergeant initiated a traffic stop because the following driver had allegedly committed moving violations, according to the sheriff. Christina King of Middletown was in a stolen “B Safe Driving School” car, according to the sheriff’s office. King said she "wanted to see where he was going.” King is facing one charge of receiving stolen property. (https://bit.ly/2EhXcvY)

A West Palm Beach Man caught a 17-foot, 120-pound python with his bare hands after seeing it on the side of the road ….. FLORIDA (https://goo.gl/F2yoQB)

Girl Rescued Floating On An Inflatable Unicorn Nearly A Mile Out To Sea
https://www.sunnyskyz.com/good-news/3929/Girl-Rescued-Floating-On-An-Inflatable-Unicorn-Nearly-A-Mile-Out-To-Sea