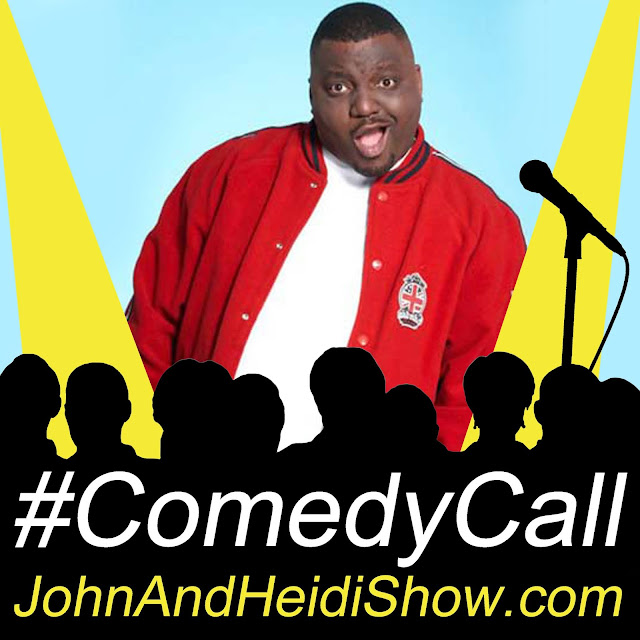 Today we have a #ComedyCall with a very funny man. ARIES SPEARS, whose career launched as a principal, original cast member on FOX’s hit sketch comedy show,Mad TV, when he brought a fresh, hip style to the already-edgy program carrying it through ten seasons, has used the past four months during the Covid-19 pandemic entertainment industry slowdown to gain record-setting traction of his singular comedy bits on SiriuxXM's Pandora streamcast.

People who’ve been experimenting with Amazon’s new “Echo Frames” say the talking Alexa Sunglasses may be spying on them. (https://bit.ly/2PtrfTS)

A Utah man is behind bars after he allegedly told police he was transporting forty grams of meth to “give to his friends.” Paul Alldredge was arrested on charges of providing false personal information with the intent to be another person, driving a motor vehicle while driving privilege denied, and use or possession of drug paraphernalia and controlled substance schedule. Alldredge was traveling southbound when he appeared to be texting while driving. An officer conducted a traffic stop and requested his license and registration, which Alldredge said he didn't have. When asked what his name was, Alldredge gave the officer the name of a real person, but not his actual name. Alldredge reportedly admitted to having a large amount of meth in the vehicle and that he intended to deliver it to friends. The officer allegedly found forty grams of meth inside a bag in the car. Various other items of paraphernalia were also found in the vehicle before Alldredge was eventually arrested. (https://bit.ly/3ijvg9Z)

Tom Hanks is being considered for a role as Geppetto in the new Pinocchio film.(https://bit.ly/30zW3sw)

CBS is making a quarantine edition of “Love Island.” (https://bit.ly/3kiEp4c)

The Daily Beast has a new report examining why people are reluctant to criticize Beyonce. (https://bit.ly/31qkU14)

Disney Plus is going to charge customers an extra $30 to view “Mulan” when the film is released. (https://bit.ly/3fy5fl8)

Tinder’s stock has surged by 12% as online dating soars during the coronavirus pandemic. (https://bit.ly/3gzTiwF)

Billionaire Richard Branson is expected to fly into space on a Virgin Galactic Rocket next year, getting him there before fellow Billionaires Elon Musk and Jeff Bezos. Branson owns Virgin Airlines. (https://bit.ly/2XvYZUO)

The City of Pittsburgh is experimenting with a guaranteed income that will pay select citizens $500 a month to live there. (https://fxn.ws/30sgirW)

L.A. Mayor Eric Garcetti is going to shut off power at homes that throw large parties in defiance of lockdown orders. (https://bit.ly/2F0aEVN)

The University of Connecticut has canceled its football season because of Corona concerns. (https://bit.ly/2BZa0GK)

In 1943, Philip Morris ran an ad acknowledging “smokers’ cough.” They claimed it was caused by smoking brands other than Philip Morris.

A surge in Coronavirus cases has forced Finland to reintroduce its recommendation to work from home. (https://tmsnrt.rs/2DlmzNw)

In what may be the least lucrative heist ever, a convicted felon broke into an Iowa bank early Tuesday and escaped with only hand sanitizer. 39-year-old Mark Gray is locked up on a trio of felony charges after allegedly burglarizing three Sioux City businesses, including a Security National Bank branch. Gray is locked up in the Woodbury County jail on $6,000 bond in connection with the string of predawn break-ins. Gray is currently on probation for a 2019 burglary conviction. Investigators allege that Gray “used a tool to smash the glass door” of the bank around 12:15 a.m. He then “entered into the lobby area and stole the hand sanitizer from the bank. He then fled.” Gray is also charged with burglarizing a counseling agency and a restaurant. Post-arrest, he reportedly told Sioux City Police Department officers that he entered the businesses and “searched around for things of value, mainly money that he could steal.” (https://bit.ly/3kjfRIe)

Police in Italy have identified a 50-year-old Austrian man who broke three toes off a statue at a museum as he posed for a photo with the artwork. The 200-year-old plaster cast model of Antonio Canova's statue of Paolina Bonaparte was damaged in the incident on July 31st at the Gipsoteca Museum in Possagno, northern Italy. The man, whose name has not been released, was caught on a surveillance camera jumping up onto the statue's base to get a picture when the maneuver inadvertently snapped its toes. The damaged statue is the original plaster cast model from which Canova carved a marble statue that is housed in the Borghese Gallery in Rome. When police contacted a woman, who signed in on behalf of herself and her husband, she burst into tears and admitted her husband was the toe breaker. A court in Treviso is currently deciding whether to press charges. (https://cnn.it/31t45Tk)

A New Smyrna Beach Hospital Patient set his hospital bed on fire after he felt like he was being ignored by nurses ….. FLORIDA (https://bit.ly/3a5dDXg)