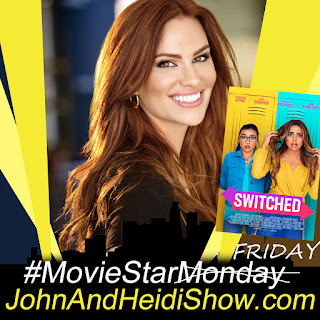 It's a #MovieStarMonday on a FRIDAY! We visit with Nicole Weider about her new film Switched available on VOD starting TODAY! - https://amzn.to/32QfrRS

A study by the University of Boulder in Colorado found that breathing in poor air quality can upset your stomach.(https://bit.ly/32LdhTJ)

A Florida man arrested on a weapons charge really stepped in it after deputies apparently accused him of pooping marijuana…or something like that! The case of the dastardly defecator began to drop on August 17th in Indian River County. A deputy arrested a 29-year-old man on a possession of a firearm by a convicted felon charge and took him to jail. The man was a passenger in a sport utility vehicle where the deputy reported finding a .40 caliber pistol. Less than four hours later, the same deputy was notified by jail staff, who discovered “an unknown object” in the man’s stomach. The man admitted that he had eaten a bag of pot when the deputy approached the vehicle. Several hours later, the man reportedly moved his bowels “and there was a small plastic bag.” In the bag was what investigators believed to be marijuana. The man was arrested on additional charges of possession of less than twenty grams of marijuana. (https://bit.ly/31SvRdn)

Sylvester Stallone announced that he’s putting out a 35th Anniversary director’s cut of “Rocky IV” that will not include the robot in Rocky’s house. (https://dcdr.me/3gVUFp6)

The Weeknd revealed that the reason he was wearing makeup at the MTV VMA’s that made it looked like he’d been beaten up was because of a film he’s working on. (https://bit.ly/3gHNHUl)

The leaders of Metallica gave an interview to the Independent in which they warned that society has become so tightly wound that everyone is gunning for a fight. (https://bit.ly/2YUaRkp)

They asked pregnant women what foods they crave most. Can you guess which food came out on top? Ice cream? Pizza? The answer is nachos!

Doctors in Thailand performing emergency surgery on a man who was rushed to hospital writhing in pain were stunned when more than 4 pounds of loose change spilled out of his stomach. The man had been swallowing the coins for a long time and had turned black from stomach acid.

Thursday,September 3... marked the 25th anniversary of the launch of eBay. When it launched it was first called AuctionWeb. One of the first items sold on AuctionWeb was a broken laser pointer for $14.83. Astonished by its sale, AuctionWeb founder Pierre Omidyar contacted the winning bidder to ask if he understood that the laser pointer was broken. The buyer explained: “I’m a collector of broken laser pointers.” Even though eBay launched as an auction site, the Buy It Now button accounts for most sales on the site.

Washington police officers get a half hour class in how to sit down.

A stranger dressed as Batman has been roaming the streets of Santiago and feeding the homeless in the South American Capital. (https://tmsnrt.rs/328aJyE)

A naked Australia Man decided that a Sunshine Coast car and dog wash would be the perfect place for a late-night shower. In video recorded on August 16th, the man is seen receiving a high-pressure hose down in one of the washing bays. The owner of the car wash shared the footage on their Facebook page and wished the man a “speedy recovery.” “We had a great weekend of car washing at Parklands Car and Dog Wash with our new touchless Storm automatic,” a Facebook post read. “We even had a man versus machine incident on Saturday night! “Thanks for your patronage and hope you make a speedy recovery.” It remains unclear why the man decided to bathe in the car wash, or if he realized there were cameras installed. (https://bit.ly/3b2iY31)

Police say that a New Jersey man accused of calling in thousands of dollars’ worth of bogus food orders during the Coronavirus pandemic, including some he claimed were for cops, has been arrested. 34-year-old Sudeep Khetani of Kendall Park in South Brunswick Township, was busted Tuesday, some four months after he was initially charged with theft for exploiting several New Jersey pizzerias and restaurants. Using fake phone numbers, Khetani made several hundred calls to pizzerias in South Brunswick, as well as other pizza joints and restaurants in Montgomery, Plainsboro and West Windsor between mid-January and early April, costing them several thousand dollars in total losses. Police noted that Khetani placed the orders with no intention of picking up or paying for the grub and made threatening and sexually explicit comments to employees who answered the phone. Khetani was arrested with help from police in Orlando, Florida, where he was on probation for selling fake Disney World tickets. (https://bit.ly/32wWSlt)

Georgia Police Officer Gives His New Bike To A Man He Spotted Walking To Work
https://www.sunnyskyz.com/good-news/3936/Georgia-Police-Officer-Gives-His-New-Bike-To-A-Man-He-Spotted-Walking-To-Work