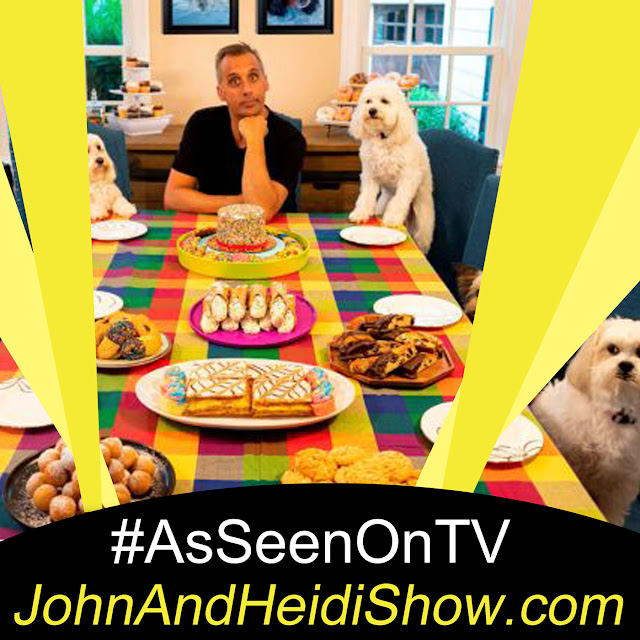 SORRY.... NO DEAR JOHN LETTER THIS WEEK!
We had the opportunity to visit with Joe Gatto from the Impractical Jokers about his NEW BOOK! The Dogfather: My Love of Dogs, Desserts and Growing up Italian - https://amzn.to/2EX7a6j

A Bloomberg survey found that a growing number of investors are hoarding gold, bitcoin, and whiskey as inflation fears grow. (https://bit.ly/34COHHc)

A construction worker found passed out drunk on a street in China claimed his employer had pressured him to earn his unpaid wages one shot at a time. The man said he confronted his boss at a restaurant to pay up the over $6,000 owed to him in back wages. The man said his boss forced him to do shots, saying he would pay him $3 a glass. The man had consumed an entire bottle before leaving the restaurant and passing out on the street.

The BBC is being mocked online for Tweeting out a weather map that was shaped like a penis. (https://bit.ly/32KXi8a)

Tiger Woods’ former mistress Rachel Uchitel is on the short list to replace Dorinda Medley on “The Real Housewives of New York.” (https://pge.sx/3gBOI0j)

CBS’ fall schedule will be stacked with reality shows because of their inability to film sitcoms during lockdown. Even the reality shows are based on the lockdown. The network is re-airing the first season of “Star Trek Discovery,” which originally aired in 2017. (https://bit.ly/34E32Tr)

The average child will have traveled 3,754 miles around the world by the time they reach 15 — almost twice as far as their own parents had at the same age. At 15 they will have already been on four trips abroad.

A breakfast cookie is coming soon. The Girl Scouts of the USA is adding a new flavor to their lineup of cookies: the Toast-Yay. The French toast-themed dessert features a top layer of frosting with a maple syrup-like flavor, a crunchy texture and a signature trefoil stamp, and the cookie is shaped like a slice of toast — raised crust edge included. https://www.instagram.com/p/CECu3DHhLd_/

A study finds that people give too much credit to their native country for deciding the outcome of World War II.

A study shows parents begin to lose control of their children at the age of 13. After years of watching their every step, at around 13 parents are left wondering what their kids are eating, doing and who they are friends with. Four in 10 worry about the food and drink their kids are eating when they aren’t with them. Almost 4 in 10 (39 percent) don’t always know who their child is hanging around with. Almost one in 10 parents believe the point at which they have to start to let go begins as early as 10 years old.

A new study found that air conditioning can spread the Coronavirus by propelling germs throughout the house. (https://bit.ly/2CSW3ut)

Johnny Depp is afraid of Clowns

Russian doctors were working frantically to save the life of Vladimir Putin’s biggest critic after he was poisoned while drinking tea. (https://yhoo.it/3l6wIyk)

A UK family inadvertently held a funeral for a complete stranger — and then buried him — following a bizarre mix-up. The family buried an elderly man they thought was their relative at St. Mary’s Church in Rockcliffe village back on July 6th. The crazy error was revealed a day later, when mortuary staff contacted the funeral home asking when the body of the man scheduled to be buried at Rockcliffe would be collected. The man they actually buried was a year younger than their loved one. He had been scheduled for cremation on July 13th — but that had been postponed. His body needed to be exhumed — but that didn’t happen until July 15th, nine days after the funeral. The correct corpse was buried there the day of the exhumation. An internal investigation is now underway. A funeral director spokesman said nothing of the sort has happened in the more than 150 years the family business has been around.(https://bit.ly/3iWK926)

A man in Clearwater, Florida is behind bars after he stole thirteen scratch-off tickets and went back to the same store he robbed to cash the tickets. According to Clearwater police, 27-year-old Herbert McClellan stole thirteen scratch-off tickets from the Speedway convenience while the clerk was distracted. When McClellan found out that one was a $30 winner, he went back to the same store to cash it in. Employees called police and McClellan was arrested and charged with petit theft and dealing in stolen property. It’s safe to say it was not his lucky day. (https://bit.ly/3aOV37e)

A Florida man who broke into a car dealership and stole $33,000 from a safe was arrested after he fell out of the ceiling as law enforcement officers were on the scene. (https://bit.ly/3aYwG70)

He Was Laid Off From His Job. Now He's Mowing Lawns For Seniors At No Charge
https://www.sunnyskyz.com/good-news/3935/He-Was-Laid-Off-From-His-Job-Now-He-039-s-Mowing-Lawns-For-Seniors-At-No-Charge