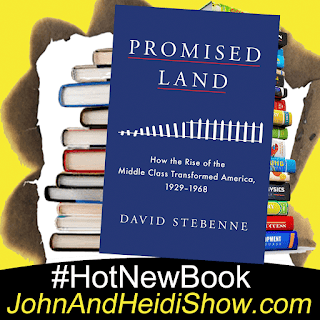 In the midst of a years-long political debate about the promise and potential of the middle class, David Stebenne’s PROMISED LAND: How the Rise of the Middle Class Transformed America, 1929 – 1968 offers a timely, sweeping, and definitive account of America’s middle class in the 20th century: the policies that supported its growth in the first half of the century, the transformation it wrought on society, and the social, political, and economic forces of the 1960s that brought this period of expansion to an end. https://amzn.to/306BUcZ

A new study is playing violin music for hospital patients to see if it helps with their isolation and anxiety. The research found that music reduces anxiety, pain, and loneliness. (https://on.wsj.com/3bZMhDY)

A Norwegian man was fined and placed on probation for 18 months for driving a car six feet while drunk. The man and his pregnant wife had just left a pub and decided he was too drunk to drive. She climbed behind the wheel but had trouble steering the car out of a tight parking space. So her husband switched places, removed the car from the spot, and then climbed back into the passenger seat. His wife then drove home. A cop who witnessed the incident followed the couple home and gave hubby a sobriety test. He was found to be legally drunk.

Revised ratings show that the Emmy Awards had the fewest amount of viewers in the Award Show’s history. (https://bit.ly/2RSQqjG)

The season premiere of the “Ellen” show beat the ratings predictions. (https://bit.ly/33OB59D)

Ellen Degeneres promised she’s the same person backstage that you see on TV during her return to the show Monday. Ellen was accused of creating a toxic work environment. (https://pge.sx/3hRwZCo)

A Los Angeles artist is selling a scary Karen Mask for Halloween.(https://bit.ly/3mAdceG)

A video of a group of anti-mask protesters parading through a Florida Target playing the Twisted Sister song, “We’re Not Gonna Take It” has gone viral.(https://bit.ly/2ZKtVBS)

A video of a Spirit Airlines employee telling a passenger that he couldn’t wear a gaiter in place of a mask has gone viral. (https://bit.ly/35T9l6o)

A video of a massive six-year-old boy dominating his opponents in a youth football game in Texas has gone viral. The six-year-old is five foot one and 130 pounds. He weighs twice as much as your average six-year-old. (https://bit.ly/2HjBzgn)

A Royal Biographer quotes the late Princess Diana as saying that the only thing Prince Charles learned about love from his parents was shaking hands.(http://dailym.ai/2RN5pM0)

Prince Harry has joined an exclusive Helicopter Club in Los Angeles and plans to fly Meghan Markle and their son Archie around. (https://pge.sx/3iMPZUc)

Alicia Keys revealed in a new interview that she was supposed to grow up to be a drug addict or a prostitute but music helped her break through.(https://pge.sx/3iJh0rv)

Billionaire Ron Perelman is selling his yacht, his private jet, and his art collection as the Coronavirus damaged his net worth. (https://bit.ly/33MArcP)

A man walked into a store in England and grabbed a banana from a counter, then placed it inside his sweatshirt. He then pretended the banana was a gun. Lucky for the thief the clerk didn’t see him steal the banana and assumed he had a gun. He made off with some money and cigarettes.

A Louisiana man who was found to have a loaded pistol in his buttocks during a jail strip search pleaded guilty today to weapons and contraband charges. In a plea deal, 24-year-old Justin Savoie copped to a pair of felony counts and a misdemeanor charge in connection with his arrest late last year at a residence in Golden Meadow. Savoie received a five-year suspended prison sentence on the felony convictions during a District Court sentencing. He was also placed on three years probation and ordered to serve ninety days in the Lafourche Parish jail. According to police, Savoie had a .25 caliber Titan pistol concealed in his rear end. The handgun, which has a 2.5-inch barrel and measures 4.375 inches long, was loaded. After Savoie’s collar, the Golden Meadow police chief told TSG, “Whoever thought a .25 caliber pistol could be an ass-ault weapon?” (https://bit.ly/2RJtMu9)

A Canadian man has been charged with dangerous driving for allegedly taking a nap while his self-driving Tesla car clocked up more than 90-miles-per-hour. Police said both front seats were fully reclined, and the driver and passenger were apparently asleep when they were alerted to the incident in Alberta. When police turned on emergency lights and other vehicles moved out of the way, the Tesla Model S sped up. The 20-year-old driver from British Columbia is due in court in December. He had initially been charged with speeding and handed a 24-hour license suspension for fatigue, but was subsequently charged with dangerous driving. The incident happened near Ponoka, some 100 kilometers south of Edmonton. “Nobody was looking out the windshield to see where the car was going,” Police Sergeant Darri Turnbull told CBC News. He said that when they put on their emergency lights the Tesla accelerated, with vehicles ahead of it moving out of the way. “Nobody appeared to be in the car, but the vehicle sped up because the line was clear in front.” (https://bbc.in/2H9X6b8)

A Sebastian man was arrested after he reported a murder by bringing a skull to a grocery store and using it as a hand puppet ….. FLORIDA (https://goo.gl/M8gTBe)


JuJu Smith-Schuster's Act Of Kindness For Man In Need Is Caught On Camera
https://www.sunnyskyz.com/good-news/3956/JuJu-Smith-Schuster-039-s-Act-Of-Kindness-For-Man-In-Need-Is-Caught-On-Camera