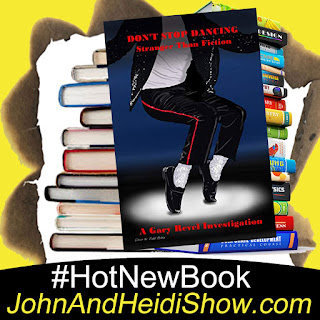 Today we visit with author Gary Revel about his latest book Don't Stop Dancing: Stranger Than Fiction. It's an interesting book about Michael Jackson's Life and Death. https://amzn.to/3mP0Uil

A study published in The Journal of Preventative Medicine found that chlamydia and gonorrhea are increasing in young women. (https://bit.ly/2RqXYKs)

A new study found that fish that get exposed to noise pollution die early. (https://bit.ly/3khWleq)

A study found that a growing number of virtual learning sessions are being hacked by people who display pornography. (https://bit.ly/3muZIkj)

It’s a lesson in reading, writing and reefer. Florida moms and dads have been spotted smoking weed, drinking, and walking around half-naked in the background of their kids’ online classes, frustrated teachers said at a school board meeting. “Parents, please make sure that you have on proper clothing when you are walking behind your child’s computer because we’ve seen them in their drawers, their bras, and everything else,” Boca Raton Elementary teacher Edith Pride vented Wednesday. She and other educators said they’ve seen everything from parents puffing giant joints to moms with exposed ankle monitors during virtual lessons, which began in the district two weeks ago. “Parents, when you are helping your children at their computer, please do not appear with big joints in your hands and cigarettes,” Pride said. “Those joints be as big as cigars. Oh yeah, we’ve seen it all.” (https://bit.ly/2RLGhFH)

A trailer for Nomadland is online. The movie — starring France McDormand — follows a woman in her sixties who, after losing everything in the Great Recession, embarks on a journey through the American West, living as a van-dwelling modern-day nomad. Nomadland comes to theaters December 4.
https://www.youtube.com/watch?v=dVP7PNRx8Mw&feature=youtu.be

Disney+ has released the first trailer for the second season of The Mandalorian. The trailer features a lot of brief glimpses of action, at least one funny child moment, and quick looks at side characters from the first season who are also returning. It also brings up some deep Star Wars universe lore, including the longstanding rivalry between Mandalorians and self-style galactic protectors, the Jedi. Season 2 begins October 20 on Disney+.
https://www.youtube.com/watch?v=eW7Twd85m2g&feature=youtu.be

Owners of the $5 billion dollar streaming startup, “QUIBI,” are said to be looking for a buyer. QUIBI stands for “Quick Bites” because they specialize in short stories. (https://on.wsj.com/2FUgvwD)

Charlie Sheen is denying reports that he had a hand in his ex-wife Denise Richards’ decision to leave “The Real Housewives of Beverly Hills.” (https://pge.sx/2Hcmtcz)

Never before seen pictures have surfaced of Jeffrey Epstein cavorting with bikini clad women on his private island. (https://bit.ly/32GFRGO)

A study finds that Americans have barely improved their eating habits.

Close your eyes and count your toes. If you only come up with nine, you are not alone. Around half of us think we are missing a toe — with the second toe, the one beside the big toe, being the most likely to be ‘lost’. In the study 19 healthy young men and women closed their eyes while their toes were gently prodded, one at a time. This was done over and over again, and each time they were asked which toe was being touched. To the researchers’ surprise, nine out of the nineteen volunteers said they believed one of their toes was missing. The bizarre study also revealed that we have great difficulty in telling our toes apart. Although the volunteers correctly guessed when their big or little toe was being touched more than 90 percent of the time, they struggled with the three middle toes.

A survey of drivers has revealed the best foods to eat while driving: candy bars, french fries, potato chips and chicken nuggets.

Research shows that walking is good for your brain.

According to a study, drinking tea is good for the brain.

Imagine walking in the front door and realizing you’ve been burglarized. That would stink. Then imaging discovering that the burglar has used your shower, your deodorant, and your shampoo. Worse yet, the burglar has changed into your clothes and left his worn-out clothes behind. Your cash has also been stolen. A guy in China has done this about a dozen times and police have no leads.

A wild brawl broke out between customers and workers at a Waffle House — apparently after a patron’s phone was withheld behind the counter, viral video shows. The dust-up shared on Twitter Saturday showed a group of irate diners demanding staffers return a cellphone. “Ring that one up so we can pay for that one and then you can put up that phone,” one of the women could be heard shouting. Another member of the party chimed in, “Can I please get my goddamn phone? Somebody?” He then climbed behind the counter in an apparent bid to retrieve the device and is restrained by two of the employees. The man is seen repeatedly striking one of the workers as two of the other members of his group jump into the fray behind the counter. One of the women then tries to wrestle the phone out of another employee’s hands as her wig gets knocked off and her top becomes exposed. It’s unclear why the phone was being held from customers, and where and when the dust-up took place. (https://bit.ly/2RG0QDk)

An Oregon man showing off his handgun to a pal inside a supermarket accidentally blasted himself in the groin last Sunday night. 29-year-old Nicholas Ellingford fired off the unintentional shot from his Glock 9mm while waiting to checkout at McKay’s Market in Lincoln City. The report stated that the gun went off as Ellingford placed it back into his pants — and the bullet went through his groin and out through his thigh. He was airlifted to a Portland hospital. Luckily, the bullet didn’t hit his private parts. (https://bit.ly/300RRBb)

A Florida Woman named Lovely Butts allegedly doused a juvenile relative with bleach and threatened to pistol whip the victim during a confrontation Monday night at a Daytona Beach home. According to cops, the 64-year-old Butts was arrested on a pair of felonies--aggravated assault and child abuse--and booked into the Volusia County jail, from which she was released today on bond. Seen at right, Butts is scheduled for arraignment on October 15th. Investigators allege that Butts threw bleach at the female victim, “causing the bleach to strike her in the face and mouth” and “also threatened to pistol whip” the girl “while holding a firearm.” The minor is described in a police report as Butts’ “primary caregiver.” (https://bit.ly/3c8rKNv)