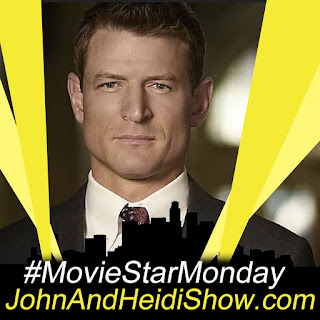 It's a #MovieStarMonday as we visit with Philip Winchester ...He is mostly known for his role as Peter Stone in Chicago Justice and Law & Order: Special Victims Unit. Also known for his roles in The Patriot, The Hi-Line, LD 50 Lethal Dose, Thunderbirds, CSI: Miami, King Lear, Strike Back, Flyboys, In My Sleep, The Heart of the Earth and Shaking Dream Land.

Returning to his action roots, Montana born Philip Winchester is reteaming with his STRIKE BACK director MJ Bassett for Lionsgate’s upcoming eco-thriller, ROGUE. Set in South Africa, Philip’s ‘Joey Kasinski’ and Megan Fox’s ‘Samantha O’Hara’ lead a mercenary unit of soldiers in rescuing the daughter of a governor held hostage by a militant faction. Determined to complete their mission, the unit encounters a lion farm supplying product to traditional local medicine markets during their search and finds themselves simultaneously battling the angry and inhumanely treated big cats. Aiming to deliver action and thrills with a wildlife conservation message, “Rogue” is available on PVOD and digital.

A survey shows that a growing number of retailers are concerned about the ramifications of having a socially distanced Black Friday.(https://bit.ly/2ZVWOeC)

A study by the CDC found that passengers on longer flights have a higher chance of catching the Coronavirus. (https://bit.ly/32NIsyE)

Police say an Edmond, Oklahoma woman was busted for driving while high on marijuana, and she kept her good time going after being pulled over. An officer tried to pull over Megan Gaddis Thursday night because she was allegedly driving too slowly and repeatedly switching lanes. But Gaddis allegedly sped up and ran a red light as she flashed the officer a peace sign. Police used stop sticks to stop Gaddis’ alleged joyride. Gaddis came to a stop in Oklahoma City limits. She was arrested in a parking lot near Hefner and Broadway. Police cam footage shows Gaddis doing some dancing before being taken into custody. She is accused of eluding police and driving under the influence. A dog was found in Gaddis’ vehicle and it was taken to Animal Welfare. (https://bit.ly/2RJZE1E)

Jason Batemen was mistakenly announced as a winner at the Emmy’s before “This Is Us” star Ron Cepha Jones was given the award during the virtual ceremony. (http://dailym.ai/3iUqL6s)

Candace Cameron Bure says she and her husband are spicy after the controversial picture of him grabbing her breast. (https://pge.sx/3mHIqAw)

Kanye West has asked that his campaign staff refrain from fornicating outside of marriage. Kanye got in a fight with his record label this week, posted all of his contracts online, and then, posted a video of himself peeing on a Grammy Award. (https://bit.ly/32GYtqd)

Newborns are ugly. Surveys suggest we don’t find babies particularly cute until 3, or even 6 months of age, when the awkward old man features give way to chubby cheeks and big eyes. They then remain at peak cuteness from 6 months until around age 4½. At what age are kids cutest? Researchers showed a ton of kid pics to adults and found 6-month-olds had the highest ratings.

According to a study, Americans send twice as much of our garbage to the landfill as previously estimated.

Three quarters of the nation’s movie theaters are now open, but customers are not returning in significant numbers. (https://bit.ly/2RJt3JB)

A woman in Japan has been arrested for allegedly hiring a hit man to kill her lover’s wife. Yet another example of hiring an undercover cop for the job? No, the woman was not that stupid. But after allegedly paying the contract killer over $100,000 he didn’t get the job done — so she went to police to complain. The woman and her hitman were arrested.

Back in 2017 I told you about a study that revealed that around 7 percent of Americans think chocolate milk comes from brown cows. Apparently that bit of sad news is still alive and well in 2020, because the latest survey found 48 percent of Americans aren’t sure where chocolate milk comes from, and 7 percent still think it comes from brown cows. Don’t feel too bad, America, because a survey done a number of years ago revealed that 20 percent of people (worldwide) didn’t know hamburgers are made of beef — and this survey was done well before turkey burgers, veggie burgers and the newer fake-meat burgers became popular.

Smokers work one month less a year that nonsmokers because of smoke breaks. The average smoker take four 10-minute breaks a day — that adds up to one month less work annually.

In Russia police were called to the scene of a rear-end accident. Police knew the driver well since they’d been to five of her previous accidents over the past year-and-a-half. They ticketed the woman and let her go — and she promptly rear-ended a truck, backed up, and then rear-ended it again. On the spot, police stopped her again. While chatting with her as she sat in her car, she starting to roll down a hill. They ordered her to park the car and call a friend for a ride.

An Orange County, Florida father says he doesn’t understand why his fifth-grade son was asked to remove his Hooters-themed face mask at school. He says his son has been wearing it for weeks. “There is nothing offensive or derogatory about this mask,” Greg Golba said. Golba and his 11-year-old son Ian don’t understand why he had to remove his Hooters mask on Tuesday. “I don’t think it’s offensive at all, it’s just a restaurant,” Greg Golba said. The Orange County fifth-grader says his teacher at Sunset Park Elementary School in Windermere said something about it. The district does not comment on discipline matters but says the Hooters mask violates the dress code, which says in part: “The principal at each school reserves the right to determine what appropriate dress is for the school” (https://bit.ly/3mpqsm2)

A man in central Florida needed a ride home. Instead, he received a ride to jail. Winter Haven Police said 46-year-old Jermaine Williams called 9-1-1 early Friday morning to report a dead body at a McDonald's. Officers responded to the fast-food restaurant where they found no body, just Williams sitting on the curb. He told police he called a number of times earlier in the night to ask for a ride. Police charged Williams with misuse of 9-1-1. He's being held at the Polk County Jail. (https://bit.ly/30dtpwP)

A Martin County man who was stopped for erratic driving told police his dog was driving ….. FLORIDA (https://goo.gl/vzUXi5)

GOOD NEWS: Brought to you by BetterCreditCards.com
A Horse Sanctuary In California Was Reduced To Ashes, But All 20 Horses Miraculously Survived
https://www.sunnyskyz.com/good-news/3958/A-Horse-Sanctuary-In-California-Was-Reduced-To-Ashes-But-All-20-Horses-Miraculously-Survived