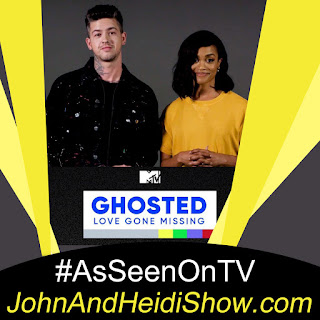 Today we visit with Travis Mills, the host of MTV’s hit series, Ghosted: Love Gone Missing, where he helps distraught people track down former friends or lovers who suddenly cut off all contact with them, revealing the true case of their “ghosting.” In the age of social distancing, many peoples are seeking to rekindle connections with loved ones who may have ghosted them without notice. This season, Travis puts his sleuthing skills to the test in entirely self-shot episodes to help people get the closure they need.

In addition to hosting Ghosted, Travis is a recording artist, actor, and on-air personality who hosts his Apple Music Beats 1 radio show, “Travis Mills Live,” as well as his hit podcast “ADHD with Travis Mills.” Under the moniker T. Mills, he quickly became a global hit performer and songwriter, garnering millions of streams and selling out massive venues in multiple countries over the last decade. Through both solo and collaborative efforts, Mills released three full-length albums and recent singles featuring T.I., Ty Dolla $ign and more.
http://www.mtv.com/shows/ghosted-love-gone-missing

A man was arrested and charged with driving under the influence after police said he crossed multiple lanes of oncoming traffic. Court documents show Drew Collins was taken into custody on September 4 just before 11 a.m. on Magnolia Avenue at Cherry Street. Collins allegedly drove across the wrong side of the road and onto a sidewalk where he was found to be unconscious behind the wheel. Emergency responders reportedly found a used needle in Collins’s lap and administered a dose of Narcan to revive him. Collins was taken to a hospital for treatment before being placed in the Knox County Jail. He faces charges of DUI, driving while license suspended and improper lane change.
https://www.wvlt.tv/2020/09/06/man-charged-with-dui-driving-across-wrong-lanes-of-traffic-onto-knoxville-sidewalk/

Selena Gomez said in a recent interview that all of her ex-boyfriends think she’s “crazy.”(https://pge.sx/2Zi2lM5)

Metal legend Ozzy Osbourne recalled how “peaceful” he felt when he tried to kill his wife Sharon in 1989. Speaking in the new documentary “The Nine Lives of Ozzy Osbourne,” the couple shared their memories of the potentially fatal incident, which took place while the Black Sabbath icon was on drugs. (https://bit.ly/2DG8han)

Taylor Swift just tied the late Whitney Houston’s record for the most weeks on the Billboard 200 among female artists. (https://fxn.ws/3iavAYX)

Rihanna recently bruised her face after flipping over during an electric scooter accident. (https://bit.ly/2DHghYE)

R. Kelly's attorneys want to question a convicted member of the Latin Kings gang who says he beat up the jailed R&B singer in a Chicago cell. (https://fxn.ws/3h8rEXi)

A study says that a few glasses of wine a week can ward off depression. Two to seven glasses a week cuts your risk by 32 percent.

Night time online shopping is increasing. Women are particularly in the habit of shopping from under the comfort of their covers, accounting for two-thirds (66%) of night time customer purchases. But men spend slightly more in the night — at $45 compared with $41 for women.

A study found a link between sodas and an early death. (does not sound fun)

In Austria police were summoned to the report of a break-in at a furniture store. Investigating officers found the glass front door smashed but once inside couldn’t find anyone. They were getting ready to leave when an officer heard a sound — a sound of someone snoring coming from the carpet racks. And that’s where they found their crook, obviously tired out from the hard work of breaking in.

A woman in Scotland was unpacking her groceries when she spotted Jesus’ face in the discoloration of a potato skin. The potato was included in a larger bag of potatoes that cost Nikki Halkerston roughly $1.50. Halkerston said, “I was staring at it, and it was just quite obvious it was Jesus’ face. It was just looking at me. … I called my husband into the kitchen, and he’s usually really skeptical about these sorts of things. He never gets over-excited about anything but even he agreed it looked like Jesus!” Halkerston has since eaten the potato.

Federal authorities reined in a Long Island, New York pharmaceutical company employee who allegedly swiped hundreds of thousands of dollars in horse drugs from his work — and then sold them directly to veterinarians and trainers. 58-year-old Gregory Settino was arrested on an indictment charging him with swiping the equine medication and pawning it at New York race tracks, including Belmont Park. He allegedly mounted the plot “in order to enrich himself and without regard for how his sale of the medical products could potentially endanger the health of horses,” acting US Attorney Seth D. DuCharme said in a statement. Authorities said that the medication was valued at more than $1 million. Settino allegedly pocketed more than $600,0000 from hocking the drugs to vets and trainers. The indictment charges Settino with theft of medical products and making a false statement to a federal agent. If convicted, he could face up to 25-years in prison. (https://bit.ly/32cYLFf)

A Pensacola Man became an internet celebrity after his GIANT NECK made him the subject of a million jokes on social media ….. FLORIDA (https://abc7.ws/2miTDwD)