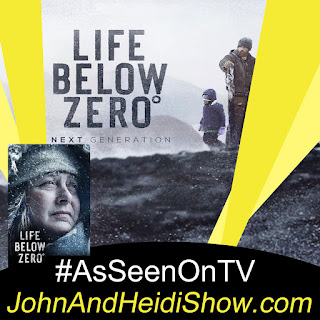 Today we visit with Sue Aikens and Brittany Rowland about their Emmy Award-winning “Life Below Zero” and “Life Below Zero: Next Generation” which air Tuesday nights starting at 8pm ET/PT on National Geographic Channel. https://www.nationalgeographic.com/tv/shows/life-below-zero

Researchers at the American Academy of Sleep have concluded that a poor night of sleep often ends up ramping up one’s anger the next day. (https://bit.ly/32f3AxG)

The owner of an Iowa bar named “The Pour Bastards Pub” was busted for letting drinkers flout social-distancing rules — then ripping up the charge sheet when served at his bar. When cops first confronted Charles King at his Newton pub on September 4th, he allegedly told them he did not believe in state-issued guidelines and would let in anyone who wanted to be there. Officers returned last Thursday night to serve him with a criminal charge for public health violation — which he tore through with a pen and ripped from the officers’ clipboard. The bar owner was then hit with extra charges for struggling with police who arrested him. He was then also charged with possession of contraband in a correctional institution when he was allegedly found with a vape cartridge that contained 87.2 percent THC and .2 percent CBD. King was released on a $5,600 bond with his initial appearance set for September 29th. (https://bit.ly/2RtXe7v)

“South Park” is going to tackle COVID-19 in its first ever, hour-long episode on September 30th. (https://bit.ly/3iCdcIp)

Madonna is co-writing and directing her own biopic. (https://bit.ly/300qhEr)

Yuengling, America’s oldest operating brewer, has struck a deal to sell its beer on the west coast for the first time ever. Yuengling is currently available in twenty-two east coast states, but they’ve partnered with Molson-Coors to expand out west. (https://bit.ly/3mvrqNB)

Sylvester Stallone is going to debut a painting he made in the early 70’s that inspired him to write Rocky. (https://pge.sx/3hBTHP8)

The French Government is cutting down on public activities to control the spread of Coronavirus. (https://bit.ly/3hw5i1R)

In Kansas it's illegal to eat cherry pie with Ice Cream

A fierce critic of Vladimir Putin has emerged from a coma after being poisoned last month and says he plans to return to Russia. He was poisoned after drinking tea. (https://bit.ly/35C5xGw)

Authorities have confirmed a snake is not a valid face covering after a man in England was spotted with one wrapped around his head on a bus. One passenger, who asked not to be named, said she initially thought the man was wearing a “funky mask” before she spotted it slithering over the hand rails. She said she found the incident “really funny” and that the animal did not seem to be bothering any of her fellow passengers. Pictures showed the man was not wearing a mask under the snake. Using a face covering on public transport is mandatory, except for those who are exempt for reasons of age, health or disability. A Transport for Greater Manchester spokesperson explained that makeshift masks are okay, but stated “While there is a small degree of interpretation that can be applied to this, we do not believe it extends to the use of snakeskin – especially when still attached to the snake.” (https://bit.ly/3iELn2s)

A Georgia man was sentenced Monday to more than two years in federal prison after pleading guilty to a scheme that used stolen identities to obtain tickets to The Masters golf Tournament. Federal prosecutors say 42-year-old Stephen Michael Freeman of Athens and three family members in Texas sold those tickets for a profit. U.S. District Court Judge Randall Hall in the tournament's hometown of Augusta sentenced Freeman to twenty-eight months in prison. More than a year had passed since Freeman pleaded guilty to conspiracy to commit mail fraud. His parents and a sister also entered guilty pleas last year and were sentenced to three years on probation. Federal prosecutors said the family used stolen IDs from 2013-17 to cheat the lottery system that distributes tournament tickets and to circumvent Augusta National Golf Club's rules allowing people to apply only once to enter its ticket lottery.(https://bit.ly/32yCTUK)

A Florida man was arrested for using a superglue-like substance to make orange cones permanently close a road near his home. FAKE NEWS