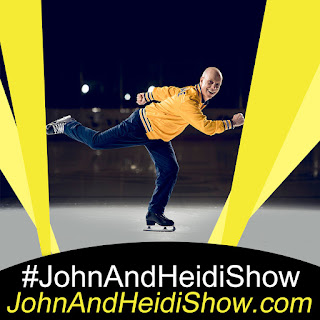 There’s a very specific recipe for a happy life. Experts studied 4,000 adults and found that the most self-satisfied people work seven hours a day, have five home cooked meals per week, and take two vacations per year. Hanging out with friends and exercising also helps. Watching TV gives you a boost too, but not too much. Stick to about three of your favorite shows per week.

A new survey found that 4 in 10 Americans are planning to have a virtual Thanksgiving for safety purposes. (https://bit.ly/3iMMZGh)

The Monroe County, Florida Sheriff's Office said that a drunk 48-year-old man was arrested last Wednesday afternoon after chasing a woman off his property with a machete. Deputies say Michael Tucker recently broke up with his girlfriend, who had been staying with him at his house. Tucker told deputies they were arguing when a friend of his ex-girlfriend came over. Tucker admitted to chasing the woman off his property with a machete. The sheriff's office said Tucker also admitted to drinking prior to the events unfolding. Luckily, Deputies said that no one was injured. Tucker was taken to jail and is being charged with aggravated assault. (https://bit.ly/3jQ7aED)

Nineteen Kids And Counting Star Jill Duggar is said to be on bad terms with several of her family members and is on the verge of pulling out of Thanksgiving. (https://pge.sx/3iP4aHC)

Nicole Kidman told New York Times Magazine that she and Tom Cruise went go-karting together during the filming of “Eyes Wide Shut.” (https://pge.sx/3d6WWx3)

A teen in Croatia was arrested after taking his dad’s police uniform and stop sign and using it to collect fines from drivers. He was arrested after a man on a motorcycle refused to pay a fine and called other officers when he became suspicious.

Ladies, have you ever felt like some days you just looked better than others? A survey taken of women over 18 across the U.S. revealed that whether you live in cities or rural areas, and despite your ages, women feel their ugliest on Mondays, late at night, and early in the morning. Women also don’t feel so hot about themselves on Sundays, when they’re sick, sweating, stressed, angry, lonely, or depressed. Women feel the best about their appearances for a mere three hours a day — between the hours of noon and 3 PM. They also don’t feel so bad about themselves on Thursdays.

Got a unique story about how you met your mate? Samantha Butler-Hassan tweeted this: “7 years ago I worked at a small company of about 15 people. I sent an email to all my co-workers one Friday, inviting them on a weekend hike. Only one person came, a guy from the web development team that I’d hardly spoken to. Today is our 6th wedding anniversary. We’re going hiking.”

An Italian man who once held the Guinness World Record for most ice cream scoops balanced on a cone has recaptured his record. Guinness said Dimitri Panciera originally captured the record in 2013, when he balanced 85 scoops of ice cream on a single cone. The record was captured by Ashrita Furman, who upped the ante with 123 scoops. Panciera recaptured his record recently with a new record of 125 scoops.

If you’re intrigued — or freaked out — by the idea of the paranormal, you’ll want to know which U.S. state has racked up more supernatural sightings since 2005 than any other. In Texas, residents have seen 6,845 ghostly somethings since 2005. That shakes out to an average of 456 per year. California has had 6,444 ghost sightings since 2005.

What color cars get the most money at resale time? In order: white; red; burgundy; blue. Avoid gold and brown cars.

A Russian Olympic Gymnast who was rumored to have given birth to Vladimir Putin’s twins has vanished.(https://bit.ly/34C8THs)

Corrections officers subjected inmates to “inhuman” discipline by blasting the children’s song “Baby Shark” on a loop at an Oklahoma jail. In a misdemeanor criminal information filed, two former Oklahoma County detection officers and their supervisor were each charged with conspiracy and multiple counts of cruelty to an inmate. As alleged in court records, former jailers Christian Miles and Gregory Butler, both 21-years-old, and Christopher Hendershott, a 50-year-old lieutenant, abused four male inmates by handcuffing them to a wall “in a standing position for extended periods of time while at the same time playing music loudly.” The alleged cruelty occurred late last year at the county lockup in Oklahoma City. The court affidavit states that inmates and staff told investigators that the blasting of “Baby Shark” was intended to put “undue emotional stress on the inmates who were most likely already suffering from physical stressors.” (https://bit.ly/33DwdW1)

A New York woman crazily threatened to kill her boyfriend's family's dog after they changed their Wi-Fi password and refused to give her the new one. Reddit user “Scary Xenomorph” shared a five-minute video of the unnamed tenant freaking out on the family's front doorstep. The shocking footage was filmed by the person's friend, whose brother lives in the basement with the woman. “I live here. It's illegal!” the woman yells at the door. “Why don't you come outside and be a woman? Come outside, let's talk. Give me the f*****g Wi-Fi before you get arrested, and your mom 'cause I live here and it's illegal.” “You want me to try that way, or you want your dog to come dead?' she asks. 'I have ways in, and your dog won't be breathing tomorrow. You have two seconds to give me the Wi-Fi. I need the Wi-Fi!” The police were eventually called and reportedly broke up the spat. (http://dailym.ai/3nuolOe)

A Dade County Prosecutor got a DUI three hours after winning a DUI conviction against a suspect ….. FAKE NEWS

Internet Rallies Behind Struggling Business After Video Surfaces Of Owner In Tears https://www.sunnyskyz.com/good-news/3987/Internet-Rallies-Behind-Struggling-Business-After-Video-Surfaces-Of-Owner-In-Tears