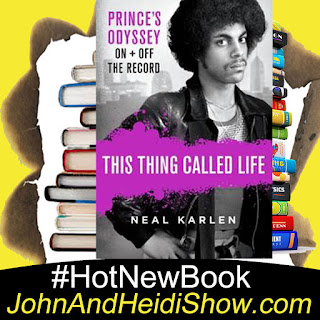 Today we visit with journalist and author Neal Karlen about his new book. A warm and surprisingly real-life biography, featuring never-before-seen photos, of one of rock’s greatest talents: Prince. The new book is called "This thing called Life: Prince’s Odyssey, On and Off the Record” https://amzn.to/2HpeFV0

A survey by Marketability.com named Fort Collins, Colorado as the best place to live in the country. (https://on.mktw.net/3iWMdXj)

Law enforcement officers who pulled a driver over for a traffic violation in Mississippi allegedly discovered about thirty-seven pounds of methamphetamine hidden inside a spare tire stashed in the vehicle. The Scott County Sheriff’s Office and the Flowood Police Department stopped a pickup truck along an interstate near Flowood early this month after spotting it driving in a “careless manner,” according to the agencies. An officer conducting the stop discovered a tire in the bed of the truck, and inside it, an assisting deputy found 37.5 pounds (17 kilograms) of methamphetamine worth an estimated street value of $350,000. The driver was charged with aggravated trafficking in methamphetamine. The suspect was not immediately identified and it was unclear whether they were being held in custody. (https://bit.ly/3iVPhDp)

Dwayne Johnson took to Instagram to announce that he is now the most followed man in the world with over 200 million followers on Instagram and over 300 million followers across all of his social media platforms. The Rock dressed for the momentous occasion in a white button down shirt and black bow tie while holding a chilled bottle of Teremana tequila.

A video of a Zamboni that exploded on a hockey rink in Rochester, New York has gone viral. (https://bit.ly/2H3z3uy)

Kanye West made headlines by Tweeting, quote, “My memories are from the future.” (https://bit.ly/3lVxOg4)

The LAPD arrested a rapper Nuke Bizzle who bragged in a video about getting rich off of fake unemployment claims. Nuke Bizzle, whose real name is Fontrell Antonio Baines, allegedly spent $704,000 in stimulus money. (https://cbsloc.al/358Igu2)

A video of a dorm building falling over on a demolition crane at Western Carolina University has gone viral. (https://bit.ly/3jebCMy)

“Mighty Ducks” star Brock Pierce is running for President as an Independent and he's challenging Kanye West to a debate. (https://pge.sx/2TaHG9B)

Doctors in Britain are warning that the Coronavirus has caused permanent hearing loss for some people. (https://bit.ly/3lH42eM)

They’re on thin ice! Two snowboarders accused of causing an avalanche in Colorado earlier this year could be on the hook for nearly $170,000. 26-year-old Evan Hannibal and 38-year-old Tyler DeWitt are both charged with reckless endangerment for allegedly starting the March 25th snowslide that buried hundreds of feet of roadway. Things began going downhill for the pair after they submitted GoPro footage to the Colorado Avalanche Information Center. “Throughout the video there are several comments made about areas of concern,” Brian Metzger, a special operations technician with the Summit County Sheriff’s Office wrote in a report. “The pair were clearly worried about avalanche conditions but proceeded down the path anyway.” Authorities brought charges against the snowboarders after reviewing the footage. Normally, the pair would face up to six months in the county jail and a $750 fine, but prosecutors want them to reimburse the state $168,000 for the damage caused. (https://bit.ly/351z6iG)

An 11-year-old boy stole a school bus and laughed as he led Louisiana cops on a police chase before crashing into a tree. The pint-size pilferer stole the yellow school bus from the parking lot of the Progress Head Start Center in Baton Rouge on Sunday. The boy, who was not identified, hit three cars before crashing into a tree as multiple police units followed him and set up blockades at other intersections to hold back traffic. “We got our first call about a juvenile driver at 9:45 a.m., in the area of Airline Highway and Scenic Highway,” Sergeant L’Jean McKneely Jr. told the newspaper. The boy, who was not hurt, was charged with theft of a vehicle, aggravated flight, three counts of damage to property and one count of aggravated assault. (https://bit.ly/33V6p80)

A Florida man brought along an AR-15 rifle, a 9mm handgun, and a cache of ammo for his Disney World family vacation due to safety fears over recent anti-racism protests in the state and across the country. The 43-year-old Palm Beach Gardens man checked into Disney’s Polynesian Village Resort in Orlando with his guns stuffed in a tennis bag on Labor Day weekend. The man had a concealed weapons permit and was not arrested “because no laws were broken.” Security at Disney safely stored the man’s guns for him until the end of his trip. Police were notified of the incident after the bellman handling the bag discovered the weapons when he looked inside upon realizing how heavy it was. Disney spokeswoman Andrea Finger told the Orlando Sentinel in a statement: “Our policy is clear that guns or weapons of any kind are not allowed at our resort regardless of whether someone has a permit.” (https://bit.ly/3nPnR5F)

A Homeless Man Left A Donation At Oregon's Historical Society After It Was Damaged By Riots
https://www.sunnyskyz.com/good-news/3997/A-Homeless-Man-Left-A-Donation-At-Oregon-039-s-Historical-Society-After-It-Was-Damaged-By-Riots