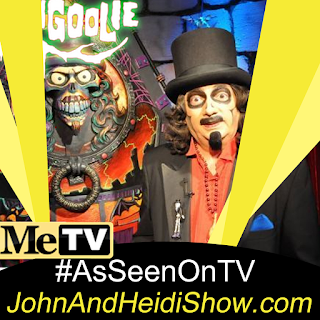 Today we visit with Svengoolie (aka Rich Koz) about MeTV's Halloween line-up of classic favorites on October 30, and the special Halloween edition of the Saturday night Svengoolie Classic Horror & Sci Fi Movie of "Frankenstein Meets The Wolfman.”

National Speak Up For Service Day

A survey by the Board of Elections is predicting the 2020 Election will have the highest turnout since 1908. (https://bit.ly/37C8ZC5)

In honor of the spookiest month of the year, Americans were asked (by YouGov) about their belief in various paranormal entities. Turns out more than four in 10 Americans believe that ghosts, demons, and other supernatural beings do exist. More than one-third of Americans (36%) say that they have personally felt the presence of a spirit or ghost. Women (41%) are more likely than men (31%) to say that this has happened to them.

Guards in a Russian prison grew increasingly suspicious of a small grey and white cat they had recently seen repeatedly entering and exiting a small hole in a prison fence. When they caught the cat and inspected its collar, they found bags of pot.

The DEA seized a record amount of methamphetamines during a raid on a California stash house that yielded 2,200 pounds of the illegal narcotic. This is more METH than they made in “The Fly” episode on “Breaking Bad.” It was one of the most popular episodes of all time. (http://dailym.ai/31cP9ZU)

Adele showed off her weight loss from the “Sirtfood Diet” during her hosting stint on “Saturday Night Live,” revealing that she lost forty pounds. (https://bit.ly/34pZ8gu)

Mike Tyson says in a Netflix documentary that happiness for him is the idea of dying because he’s seen so many bad things in his life. (https://bit.ly/31GgXWK)

A New York City Teacher has plead the fifth after police accused him of having a relationship with a female student. (https://bit.ly/3nZvre2)

The CDC is recommending a strong mandate for masks to be worn at all times on airplanes and trains. (https://reut.rs/31rpE7h)

A married father of three has been wearing skirts to work at a robotics company because he wants to prove that clothes have no gender. (https://bit.ly/31HwE0f)

Police in Korea are investigating an early morning assault in which a man accused another man of being a zombie, then punched him twice.

Daylight Saving Time ends this weekend. Before you hit the sack Saturday night, move your clocks back one hour. And your local fire department wants you to remember to check your smoke detector batteries this weekend, too.

The mask used by Michael Myers in the original Halloween was actually a Captain Kirk mask painted white.

13 percent of adults say they have experienced a ghost.

A guy in Italy walked into a post office armed with a screwdriver and told a cashier to empty her register. The cashier reportedly told the man, “Come on, don’t do it. You’d better give me that.” She told police he then started crying and told her he was behind in alimony payments. A co-worker called police while the cashier was comforting the sobbing suspect, and officers arrived to find the man still crying and telling the cashier and post office customers about his troubles.

Taco Bell fans have launched a massive campaign to “save” one of the chain’s most iconic items. In September, the fast-food franchise announced a series of menu cuts that, depending on your love for pico de gallo, may have been pretty heartbreaking. Pico de gallo aside, the most painful announcement seemed to involve Mexican Pizza. The dish, which is essentially a large, round taco topped with pizza sauce, tomatoes and cheese, will leave the menu in early November. That news didn’t go over well with Taco Bell obsessives, some of whom created a Change.org petition to stop the item’s removal. As of October 13, that petition has more than 100,000 signatures. The campaign calls fast food lovers to “band together, show support, and save the Mexican Pizza.” It’s worth noting, though, that the chain has promised that it’s adding plenty of new menu items to help fill the void — including a $1 Chicken Chipotle Melt. (https://yhoo.it/31aCiaC)

A Florida man is accused of using a 24-cent packet of Kool-Aid to rack up nearly $1,000 in fraudulent charges at a Walmart in North Naples. 37-year-old Bradley D. Young, who is also a felon out of Ohio, faces grand theft and shoplifting charges. Police were called to the store at around 5:45 p.m. Sunday on reports of a theft in progress. Police said that a store loss prevention officer watched him scan merchandise with a Kool-Aid packet concealed in his hand so the items rang up as 24-cents each. Young is accused of ringing up three packets and some other small items totaling $24.44 for $994.13 worth of merchandise. The worker told police she recognized Young from a prior incident at the store. He is accused of walking out of the store with a shopping cart of unpaid items, including a scooter valued at $248, a dual navigation system valued at $119.87 and $160 worth of batteries. Deputies arrested him at the store.(https://bit.ly/35nD7y3)

Two middle school girls were arrested for plotting to kill their classmates in the bathroom and drink their blood ….. FLORIDA (https://goo.gl/WZinzX)