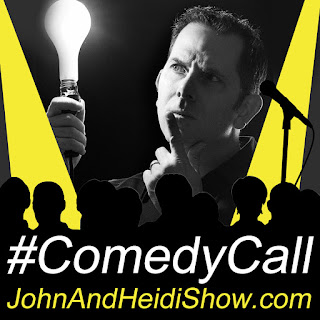 Today we visit with comedian Jeff Dwoskin for a #ComedyCall

National Cook For Your Pets Day

A study by NPR found that death rates have drastically declined for people hospitalized with the Coronavirus. (https://n.pr/37y3VP8)

Here’s a study that didn’t need to be done: Parents with kids under the age of 18 start their day earlier than non-parents. A majority of parents with children under 18 wake up by 6AM (56%), compared with 37 percent of non-parents. But parents of minors aren’t going to bed any earlier than the typical American or non-parents. A majority (57%) of these parents said that they go to bed between 10PM and 1AM, which is similar to the number of US Adults (57%) and non-parents (54%) that fall asleep between those hours.

His yacht was a weapon of mast destruction. A drunken Florida man who was trying to dock his 40-foot boat at a Sarasota marine pulled a “whiskey throttle” instead, sending the luxury craft crashing into several other vessels. 32-year-old Brendan Corey Sheridan was wearing a “disarranged” T-shirt, shorts and sandals as he placed his hands behind his back and refused field sobriety tests by a marine patrol officer. He said he was trying to dock but caught a wind that blew him into other boats. But police said the amount of damage was inconsistent with getting blown into another boat. 46-year-old Michaela Jean Larson, who lives near Sheridan and was a passenger on the ill-fated yacht, told police she was going to help him tie the boat off but noticed he was going to hit the dock and called out to him. “Sheridan then just gassed the vessel hard.” He was charged with four misdemeanor counts of boating under the influence with property damage and released on $2,000 bail. (https://bit.ly/3jlwcuq)

Susan Sarandon says Cher stole her roll in “The Witches of Eastwick” after having a liaison with producer John Peters. The movie came out over thirty years ago. (https://pge.sx/31tXvwl)

From seeing ghost children with jet black eyes to experiencing otherworldly green flashes to witnessing the TV mysteriously flicker on and off, a Halloween study found that most people have a stronger connection to the paranormal than one might think. Just over 60 percent of people admit to having seen a ghost in their lifetime. One in three people have either lived or stayed in a house they felt was haunted. The study also identified America’s top 10 fears as: snakes, spiders, sharks, drowning, heights, public speaking, failure, bees, cramped spaces and rejection.

You would think Monday would rank number one as the most miserable day of the week, but it’s not. Turns out it’s Tuesday. Researchers at the London School of Economics monitored the moodswings of roughly 22,000 people and found the second workday of the week is our least favorite. Over a two-month period volunteers registered their state of mind with the help of an iPhone app. Researchers think that on Monday the weekend has not quite worn off. But by Tuesday we are well into the working week and the following weekend is not yet in sight.

Being older than 52 is nothing to laugh about because that’s the age when we start becoming grumpy, according to a survey. The poll found those over 50 laughed far less than their younger counterparts and complained far more. While infants laughed up to 300 times a day, that figure had fallen to an average of six laughs by teenage years and only 2.5 daily chuckles for those over 60. Men were also found to be grumpier than women.

If you’ve been on the lookout for the perfect late night snack, researchers (Florida State University) say that cottage cheese before bed has a positive effect on the metabolism and overall health, helps promote muscle recovery, and doesn’t result in any body fat gains. If cottage cheese isn’t exactly your snack of choice, the study’s authors say any helping of 30 grams of protein about a half hour before turning in for the night should do the trick.

It’s not uncommon for people to be afraid of Halloween. In fact, there’s even a name for this fear: Samhainophobia.

Just days before Halloween, a Florida resident spotted a witch in the shape of a cloud floating in the sky above the Orlando area. Phyllis Sheridan said she was driving to work early Tuesday morning when she saw the spooky shape and snapped this picture. Sheridan sent the picture to her local news station, WKMG, and it took off on social media. She told Fox News it was very weird to see the witch shape just a week and a half before Halloween. Cities around America have cancelled the typical parades and fairs for the holiday due to the coronavirus pandemic, but 23% of Americans say they still plan on going trick-or-treating this year, according to a survey from the National Retail Federation. That's down from 29% who said the same thing last year. (https://fxn.ws/2HsMvIs)

28-year-old Florida Man James Fleurant was arrested early yesterday for misuse of the 9-1-1 system after he placed a bizarre 1:45 a.m. call to the police emergency line. Fleurant told an operator that he was “seeing aliens, little ones flying low to the ground.” The Vero Beach resident added that he did not want “to go Independence Day on them,” an apparent reference to the movie starring Will Smith, Jeff Goldblum, and Bill Pullman. In the 1996 film, an invasion by alien aircraft is repelled, but not before earthlings suffer widespread death and destruction. Fleurant is locked up on $500 bond on the misdemeanor charge. His rap sheet includes convictions for battery, theft, and probation violation. (https://bit.ly/2Hvb9bX)

Gainesville, Florida police arrested a man who stole and ate a woman’s $5 bill. According to the arrest report, Henry Chambers Jr. snatched a $5 bill from Kadisha Grant’s hand as it was being handed to her. The 60-year-old walked away, threatening Grant in the street. Chambers then said Grant would die before he returned the money, and proceeded to put the $5 bill in his mouth, chewed it, and swallowed it. Chambers was charged with felony robbery by sudden snatching and booked in the Alachua County Jail. (https://bit.ly/3onotzM)

'One Of The Best Things That's Happened To Me': Woman Battling Cancer Receives Letter From Stranger
https://www.sunnyskyz.com/good-news/4006/-039-One-Of-The-Best-Things-That-039-s-Happened-To-Me-039-Woman-Battling-Cancer-Receives-Letter-From-Stranger