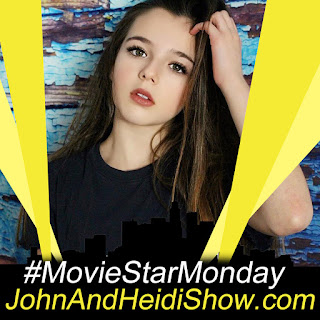 It's a #MovieStarMonday as we visit with Alexa Nisenson stars as ‘Charlie’ in AMC”s “Fear The Walking Dead”. Alexa won hearts with her role as ‘Ally’ in New Line’s comedy Fist Fight opposite Charlie Day and Ice Cube. On the small screen, she played 'Young Karen’ in NBC’s revival of "Will and Grace” as well as ‘Apple’ in Season 2 of TNTs “Good Behavior”.

A new study by Northwestern University found that anxious and moody people are more prone to dementia. (https://bit.ly/3l4BxaN)

Guys, stop thinking she’ll never leave you because you’re so amazing… she will, and she has someone waiting in the wings. 43 percent of women say they have a Mr. Plan B, and the most likely candidate is an ‘old friend’, like the guy she claims is ‘just like a brother’ to her. Other candidates are an ex-boyfriend, ex-husband, colleagues, or someone she met in the gym.

A Florida woman was arrested after asking a deputy if he would like to smoke some marijuana with her. The Sumter County Sheriff's Office said that the encounter happened on Sunday morning when a deputy made contact with a woman, identified as 50-year-old Constance Polk, who was sitting in her vehicle. He was completing a well-being check on her. They said that while talking to the deputy and observing that she had marijuana, Polk asked him if he would like to smoke some with her. She also admitted that she does not have a medical marijuana card but wants to obtain one. The woman was then arrested, the arrest affidavit said. (https://bit.ly/2F378KE)

Khloe Kardashian and Tristan Thompson posted photos from their trip to the pumpkin farm with their daughter True. (https://bit.ly/33wHlnj)

Drew Barrymore says she was blacklisted from Hollywood at the age of twelve because of her drug problem. (http://dailym.ai/3niPzYj)

A thirteen-foot alligator that weighed 800 pounds dragged a boat carrying four men around an Arkansas lake for two hours before they finally killed it. It’s the longest alligator in Arkansas state history, but the gaming officials don’t actually record weight. (https://bit.ly/36mqqWn)

A group of Pennsylvania lawmakers posed topless to remind voters not to submit a so called “naked ballot” that gets mailed in without its secrecy envelope. (https://bit.ly/2S9WYuG)

A Wisconsin school worker was busted for exposing herself to a 16-year-old male student. She received six months in prison. (https://bit.ly/2Sgp0oi)

A Florida man slashed his cousin with a pocket knife after they got into an argument over almond milk. (https://bit.ly/3n4Ye0i)

A Washington State family who lost their home to the wildfires have all tested positive for the Coronavirus. (https://bit.ly/36y0Uhi)

A man started to put his bike on a trolley bus in Lee County, Florida, but the driver didn’t look like a typical driver. Suspicious, the man went inside the office and found the actual driver taking a break. Once informed of someone sitting in his driver’s seat, the driver ran after his trolley while calling the police. He caught up to the vehicle and was able to reach inside to activate the emergency shutoff. A sheriff’s deputy arrived and asked the fake driver to get off the trolley. The man wouldn’t come out, responding with answers like, “I’m going to drive the bus,” and “Say please.” Eventually the deputy was able to talk the fake driver off the bus. He was arrested.

In Minnesota it is illegal to tease a skunk.

A seventeen-foot female Great White shark was caught off the coast of Nova Scotia that weighs 3,500 pounds. The shark is fifty-years-old.(https://hrld.us/2EYVekP)

State Police have arrested a Norwich man in connection with the armed robbery of a Chinese restaurant last year, after they linked his DNA to a blood stain found near the crime scene. But in an interview with detectives who came to take a DNA sample under a search warrant, 38-year-old Gregory Blue first said police planted the evidence — before claiming a phlebotomist dropped his DNA on the scene with an airplane. State police charged Blue on Friday with first-degree robbery with a dangerous instrument, second-degree assault resulting in serious physical injury and second-degree larceny stemming from the December 16th incident. Blue has been convicted of several felonies in Connecticut, including second-degree robbery, first degree escape and first-degree harassment, according to the warrant. He was held in lieu of $250,000 bond and appeared in court Friday for his arraignment. (https://bit.ly/30pmhxo)

A Florida man who was charged with a felony after allegedly requesting a vote-by-mail ballot for his dead wife said on Friday he was just testing the state's voting system. 62-year-old Larry Wiggins, a registered Democrat from Sarasota, requested the mail-in ballot for his wife this month even though she died in 2018. After being released from jail in Manatee County, located about thirty miles south of Tampa, Wiggins told Tampa's WFLA-TV, “I heard so much about ballots being sent in and people just having found them in different places. I feel like I haven’t done anything wrong.” Wiggins was booked last Thursday on a charge of requesting a vote by mail ballot on behalf of another elector. He was released on $1,500 bail. (https://fxn.ws/2HTG3dL)

GOOD NEWS: Brought to you by BetterCreditCards.com
Grandpa Leaves A Bucket Of Old Baseballs At Batting Cage With Touching Note
https://www.sunnyskyz.com/good-news/3979/Grandpa-Leaves-A-Bucket-Of-Old-Baseballs-At-Batting-Cage-With-Touching-Note