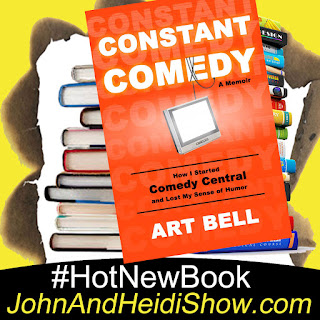 Today we have a #ComedyCall with Art Bell, best known for creating and building HBO's The Comedy Channel, which went on to become Comedy Central.. After Comedy Central, Bell became the president of Court TV and was the guiding force behind one of the most successful brand evolutions in cable television. He has a new book Constant Comedy: How I Started Comedy Central and Lost My Sense of Humor https://amzn.to/3nwJCXJ

A study by New Edith Cowan University found that older women enjoy having an extra drink or two. (https://bit.ly/3n8l6vX)

Before you pick up the phone to glance at that text message you just got while you’re driving, consider this: researchers say the average time a driver’s eyes are off the road when focused on sending or receiving a text is 4.6 seconds.

After purchasing a bag of methamphetamine, a Florida Woman turned the narcotics over to police “because it was ‘junk.’” Investigators allege that 52-year-old Beth Ann Franchak provided the meth to a sheriff’s deputy Thursday afternoon at her residence in St. Pete Beach. Cops say that Franchak told the deputy that she “purchased $20.00 worth of methamphetamine and would like to turn it over to the police because it was ‘junk.’” Franchak handed the cop a small plastic bag containing about a quarter-gram of a “white, crystal like substance resembling methamphetamine.” A subsequent test came back positive for meth. Franchak was arrested for possession of a controlled substance, a felony. She was booked into the county jail, from which she was released late Thursday night on $2,000 bond. (https://bit.ly/3iz6rGy)

The theatrical release of “James Bond: No Time To Die” has been pushed back from Thanksgiving weekend until Easter. (https://bit.ly/30wBuwB)

Sharon Osborne told her cast mates on “The Talk” that she and Ozzy Osbourne still get intimate. (https://pge.sx/3lfdvtF)

Do you feel guilted into tossing change into a tip jar at the counter where you buy your coffee? If so, you’re not alone. In fact, many have taken to calling the tip jar a “guilt jar.” Michael Lynn, a professor at Cornell University and an expert on tipping — he’s published many studies on the topic — worked his way through college by waiting tables. Lynn says he always tips waiters and waitresses extremely well. But when asked about tip jars, he states bluntly that he doesn’t like them. Why? In addition to earning at least minimum wage, cashiers and baristas — those who create coffee concoctions — are providing fairly standardized services, while waiters and waitresses provide services that are fleeting, intangible and highly customized. In other words, what a waiter must do to provide service for one diner often varies widely from what he or she must do for other diners.

A video of Giants wide receiver Golden Tate fighting with Rams cornerback Jalen Ramsey after Sunday’s game has gone viral. Ramsey has two kids with Tate’s sister, but he dumped her while she was pregnant with the third. (https://bit.ly/36Barnt)

It's illegal in Texas to put graffiti on your neighbors cow.

Buckingham Palace insiders say Queen Elizabeth offered Meghan and Harry a secret plan that would let them live in Africa so they could have some privacy. (http://dailym.ai/30x7hgH)

A man caught on surveillance video is suspected of stealing cat blood from a veterinary clinic in Florida. The St. Johns County Sheriff’s Office posted pictures showing the man who walked up to the door of the Anastasia Cat Clinic on September 17th. The man was seen touching and inspecting an Antech Diagnostics blood box before leaving the area. About twenty minutes later, a truck seen in the parking area and a man wearing the same clothing walked up to the clinic and took the box. The box contained four vials of cat blood. The vehicle then left the area. Investigators said that the box containing the blood vials amounted to a $600 loss for the clinic. (https://bit.ly/3315li8)

A schoolteacher whose body, face, and tongue are covered in tattoos and who has had the whites of his eyes surgically turned black said he was prevented from teaching at a French kindergarten after a parent complained he scared their child. But the teacher, 35-year-old Sylvain Helaine, still teaches children from the age of six up, and said that, after an initial shock when they see him for the first time, his pupils see past his appearance. “All of my students and their parents were always cool with me because basically they knew me,” said Helaine, who estimated he has spent around 460 hours under the tattooists’ needle. Despite the setbacks, Helaine said he would stick with his chosen career. “I’m a primary school teacher ... I love my job.” He said he started getting tattoos at the age of 27 when, while teaching at a private school in London, he had an “existential crisis.” Since then, he said, “Getting tattoos is my passion.” (https://reut.rs/3jknrkX)