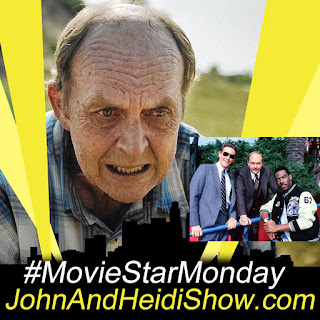 It's a #MovieStarMonday as we visit with John Ashton. He has appeared in over 100 stage, film, and television productions throughout his more than 50-year illustrious career. Select credits include “Kojak,” “Colombo,” “Police Story,” and a recurring role as Willie Joe Garr in the hit series “Dallas.” He then starred in a few mini-series including “A Death in California,” “Love, Lies and Murder,” “The Tommyknockers,” and the critically acclaimed “I Know My First Name is Steven.” He later starred as Charlie Battles in his own series “Hardball” for NBC.

His many film credits include BREAKING AWAY, SOME KIND OF WONDERFUL, SHE’S HAVING A BABY, and LITTLE BIG LEAGUE.

His NEW MOVIE is Once Upon A River. The story of Native American teenager Margo Crane (Kenadi DelaCerna) in 1970s rural Michigan who after enduring a series of traumas and tragedies, sets out on an odyssey on the Stark River in search of her estranged mother. TRAILER https://youtu.be/Zo0b40KN32g

A study of Earth's Solar Neighborhood found that over 1,000 planets could be watching us from afar. (https://bit.ly/3knlk0i)

Americans were asked, “Who do you trust more, car salesmen or insurance salesmen?”

Four men were busted in New Jersey while allegedly planning to shoot bowling balls out of a cannon — sending a bomb team rushing to the site. 43-year-old Daniel Galloway and three pals were allegedly spotted hauling the old-school weapon through a field on a trailer attached to a pickup truck in Vineland Saturday night after reports of a loud explosion in the area. Police, aided by the Atlantic City Bomb Squad, searched the vehicle and found fireworks, along with a box of a powdery black “explosive chemical” and bowling balls. The men allegedly told cops they wanted to shoot the balls out of the cannon. Marijuana, two glass pipes, and liquid THC were also found truck. Galloway, the driver, was charged with possession of a destructive device, drug possession, and intent to distribute marijuana. Dominick Cappellari was charged with possession of fireworks and drugs. (https://bit.ly/2ToRjS8)

A Federal Judge in Chicago denied R. Kelly's bid to be released from prison after he was attacked by an inmate this week. (https://pge.sx/3kkqTN8)

Kim Kardashian settled a $6.1 million lawsuit with the Paris security company that was present during her robbery. (https://pge.sx/37uPbk4)

In China a man stepped up to a bank teller window to report the theft of books of checks. After taking down his information the man stepped away from the teller window and another man took his place. He was there to cash some checks — the same checks that had just been reported stolen. Police were called to detain the suspect after the victim and bank employees subdued him and activated the security doors.

An 18-year-old guy in Germany was busted trying to break into a prison to win back his ex-girlfriend who had dumped him by phone.

A tranquil nap in the afternoon can be a great way to break up the day and add some pep to your step for the rest of your daily routine. Researchers in Switzerland found another reason why you should consider enjoying a regular daytime snooze: taking a daytime nap once or twice a week may lower your risk of suffering a heart attack or stroke. The study authors note that the period of time spent napping didn’t seem to influence this benefit, nor did napping any more than twice per week.

A recent survey reveals that more than half of adults didn’t know that our galaxy is referred to as the Milky Way. That’s somewhat forgivable — after all, it’s not often you think about our galaxy, right? But this is sad: about one in six respondents thinks our entire galaxy is called “Earth.” Again, this was a survey of adults. One in five respondents believe the sun is a planet.

They’re faithful, friendly and furry — but under their harmless, fluffy exteriors, dogs and cats, the world’s most popular house pets, use up more energy resources in a year than driving a car. A study out of New Zealand some time ago said keeping a medium-sized dog has the same ecological impact as driving 6,200 miles in an SUV.

Some restaurants are now putting tamper-proof stickers on their boxes — the only way a delivery person can get into the box is by breaking the sticker.

A survey of parents finds 78% admit to stealing from their kid’s Halloween candy, with 28% eating more candy than their own kids.

The Pope is being criticized by his colleagues for not wearing a mask around the Vatican. (https://bit.ly/34iT6yb)

A group of flying squirrel smugglers has been grounded after a 19-month-long investigation that stretched across the country and as far as Asia, Florida wildlife officials say. The Florida Fish and Wildlife Conservation Commission announced the series of arrests Monday, which disrupted what they called an “elaborate organized enterprise to smuggle Florida’s wildlife to interstate and international buyers.” It was back in January of 2019 when FWC received a tip about flying squirrels being illegally trapped in rural Marion County. That eventually led them to uncover an “elaborate scheme” to poach and smuggle animals to unsuspecting buyers. According to FWC, the flying squirrels – which are a protected species in the state – were trapped in Central Florida, then sold to a wildlife dealer in Bushnell who resold them as captive-bred pets. So far, seven suspects have been arrested on charges ranging from conspiracy to commit racketeering to grand theft. (https://bit.ly/34g7O98)

A man in Okaloosa County, Florida is accused of randomly punching a customer in a McDonald’s drive-thru and also threatening the manager with a cleaver. According to the Okaloosa County Sheriff’s Office, the confrontation happened Tuesday night. The customer says the suspect walked up to his car, punched him in the face without warning, then grabbed the victim’s groin and bit his finger. Deputies say the suspect left only to come back with a cleaver to threaten the manager. When deputies arrived, they say they found the suspect near another restaurant. Deputies say they tased him, but it appeared to have no effect. Deputies say the suspect then hit one of them in the head with a chair and punched another in the chest. The suspect, identified as 40-year-old Xue Chen of Shalimar, is facing charges that include aggravated assault, battery on a law enforcement officer, and resisting with violence. (https://bit.ly/37xbPYW)

A Tampa Cop was busted for DUI in his own police car ….. FAKE NEWS

This Dad Is Drawing Goofy Portraits Of People's Pets And Donating All The Money To Charity
https://www.sunnyskyz.com/good-news/4007/This-Dad-Is-Drawing-Goofy-Portraits-Of-People-039-s-Pets-And-Donating-All-The-Money-To-Charity