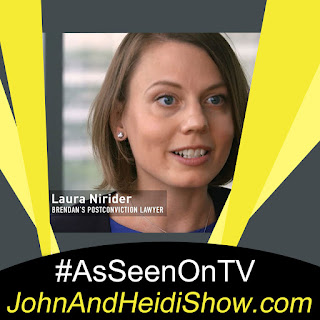 Today we visit with Laura Nirider, a clinical assistant professor of law and co-director of the Center on Wrongful Convictions of Youth (CWCY) at Northwestern Pritzker School of Law in Chicago. Her clients have included Brendan Dassey, whose case was profiled in the Netflix Global series "Making a Murderer," and Damien Echols of the West Memphis Three, whose case was profiled in the documentary "West of Memphis."

A survey of moms with two kids or more find the biggest lesson learned after having baby number two was knowing you don’t need the latest gadget to have a happy baby.

A survey by UBS found that billionaire wealth has reached an all-time high during the Coronavirus pandemic. (https://tmsnrt.rs/36H63DK)

A Texas man accused of letting his 13-year-old stepdaughter drive them to get ice cream is facing charges. 42-year-old Javier Martinez-Aguilar of Lubbock was indicted on a felony charge of endangering a child and criminal negligence Tuesday. On September 9th, a police officer pulled over a 13-year-old girl driving an SUV. A police report said Martinez-Aguilar was in the passenger seat. “She was driving her stepfather to get ice cream because he was drunk,” the report said. Police stopped the girl because she failed to yield the right of way to a police vehicle, which nearly crashed into Martinez-Aguilar and the girl. Martinez-Aguilar was so drunk he had trouble getting his license out of his wallet. He was charged with criminal negligence and child endangerment and booked into a County Detention Center. (https://bit.ly/3lgR1bS)

Mel Gibson plays an angry, violent Santa Claus in a new movie called “FATMAN.” The film tells the story of a kid who hires a hitman to kill Santa after he gave him coal. (https://bit.ly/3lriKXd)

Country Singer Morgan Wallen was booted from performing on “Saturday Night Live” this week after a video surfaced on TikTok of him partying without a mask. (https://bit.ly/2SDpbtZ)

Led Zeppelin won the plagiarism case that accused the band of stealing the intro to “Stairway To Heaven” from a band called Spirit they had opened for in 1968. (https://bit.ly/33BjnaD)

A video of a mystery object flying past the International Space Station and baffling astronauts inside has gone viral. The object was seen tumbling past the space station, leaving astronauts to believe it was space debris. (https://bit.ly/2SD2h61)

A calligraphy scroll written by late Chinese leader Mao Zedong worth $297 million dollars was torn in half by a buyer who thought it was counterfeit. The owner purchased the massive scroll for $500 only to rip it in half because he thought it was fake. (https://bit.ly/33BkrLQ)

Funk Legend Chaka Khan denied rumors that she once hooked up with Rick James. (https://pge.sx/3lnR5Xj)

The Nation’s Commercial Airlines are testing an app that will allow them to verify passengers Coronavirus test results. (https://bit.ly/3ls3R7b)

A T-Rex fossil sold for $31 million dollars at Christie’s Auction House in New York. The fossil is nicknamed “Stan” (https://bit.ly/36IQA6a)

According to research, Americans eat 387 meals by themselves every year. That’s about 7½ alone meals a week. But alone doesn’t always mean lonely. The survey revealed that 68 percent of Americans look forward to eating a meal alone. The top reason: It’s more relaxing.

The United Arab Emirates plans to send an unmanned spacecraft to the moon in 2024. (https://bit.ly/3ifJcBm)

A Kentucky woman is sending out what she calls an “urgent plea” after a box containing her mother’s cremated remains went missing when she mailed it to her sister in Florida. On September 9th, Amy Redford of La Grange, Kentucky, sent the box via the U.S. Postal Service to what she thought was her sister's address in Jacksonville. The box, which bore a bright red label saying, “CREMATED REMAINS,” was delivered the next day. But her sister had moved, and Redford didn't know. Redford has talked to postal inspectors and the apartment manager to piece together a timeline. She has emailed trash companies in Jacksonville, who’ve pledged to keep an eye out for the package. She has also talked to postal service employees in Kentucky. (https://bit.ly/3cIEr23)

A fight over milk sent one Florida man to jail. The Lee County Sheriff's Office arrested 30-year-old Justin Anthony Garcia on a charge of aggravated battery. Deputies said he had an argument with another man over which type of milk was better. Whole milk or almond milk? The debate escalated into a fight. Deputies said Garcia punched the other man in the face, chased him with a pocket knife and cut him. (https://bit.ly/33fXP3e)

A Florida woman was arrested for repeatedly calling 911 to report that her roommate was being irritating. FLORIDA