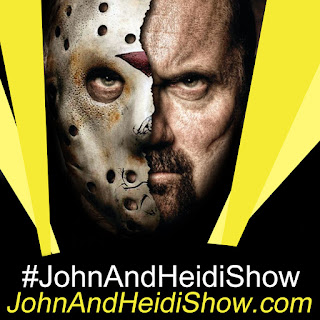 It's FRIDAY THE 13th... so we're talking to Kane Hodder, best known for his role as horror icon Jason Voorhees in Friday the 13th Part VII: The New Blood, Friday the 13th Part VIII: Jason Takes Manhattan, Jason Goes to Hell: The Final Friday, and Jason X. He is also known for his role as the deformed serial killer Victor Crowley in Hatchet, Hatchet II, and Hatchet III.

A new study finds that performing a “header” while playing soccer — hitting the ball with your head— significantly increases the likelihood of getting a concussion. (https://bit.ly/3k1vhj9)

A new study found that pasta eaters have a better diet quality. The study claims that pasta eaters consume less saturated fat and sugar on average so they tend to be in better shape than people who don’t eat as much pasta. (https://bit.ly/3mXVQHM)

Actress Emma Stone was recently interviewed and hinted that she’s interested in starting a family. (https://fxn.ws/3l10VhT)

Retirees have something else to look forward to besides playing golf: much better sleep — particularly if they have decent retirement benefits and retire relatively early. That’s what researchers in Finland found in a study of more than 14,000 people. Workers and retired workers in the study who had excellent retirement benefits, including generous pensions, were found to have less stress and better sleep.

‘Tis the season to clean gutters (fa la la la la, la la la la!). Whether it’s cleaning your gutters or hanging holiday decorations, you might have to climb a ladder to get the job done this fall. But be careful: Nearly 200,000 emergency-room visits and 300 deaths are linked to ladder accidents every year, and most people who fell didn’t have anybody holding the ladder below them. The typical accident victim is a 55-year-old man who falls nearly 10 feet.

A Russian couple had a narrow escape when their naked neighbor dropped in. The neighbor had been relaxing in her bathtub when the floor gave way, dropping her and the bathtub into the apartment below. The woman, her bathtub and gallons of water landed in the middle of her neighbors’ living room.

A Dutch medical magazine asked its readers to send in their stories of strange medical cases. One respondent told the tale of a woman who came in to a hospital complaining of a stomach ache. An X-ray found 78 forks and spoons inside her. When she went in for her surgery she told doctors: “I don’t know why but I felt an urge to eat the silverware. I could not help myself.”

The “Windy City” name has nothing to do with Chicago weather. Chicago’s nickname was coined by 19th-century journalists who were referring to the fact that its residents were “windbags” and “full of hot air.”

Turkey has issued fines against global social media companies for failing to appoint a representative to ensure they conform to Turkish law. Omer Fatih Sayan, chairman of the Information and Communication Technologies Authority, said Facebook, Instagram, Twitter, Periscope, YouTube, and TikTok would be fined $1.2 million dollars each. (https://abcn.ws/36jwxth)

This is weird, even by 2020 standards. A group of people, including a man from Idaho Falls, were recently busted in Yellowstone National Park while they were cooking a chicken in one of the park's geothermal hot springs. The culinary event happened in early August. According to Nate Eaton at East Idaho News, park authorities were given reports of a group carrying cooking gear towards a hot spring. Rangers arrived and found the group had two chickens cooking in the hot waters of a spring. The Idaho Falls man was given a citation for walking in the thermal area, to which he plead guilty. He was also given a $600 fine, probation, and he is banned from Yellowstone for the next two years.(https://bit.ly/2I24uGc)

Two Syracuse school employees were placed on leave after a photo showed them wearing “No Lives Matter” shirts as Halloween costumes. The t-shirts worn by two unidentified female employees said “No Lives Matter” and had images underneath of two horror movie villains, “Friday the 13th” killer Jason Voorhees and “Halloween” masked murderer Michael Myers. A photo of the costumes circulated on social media and showed the women in what appeared to be a classroom. In a statement, Syracuse City School District said Saturday the staffers were placed on administrative leave pending an investigation by the human resources department. (https://bit.ly/3jM2GOx)

A 45-year-old woman attacked her 80-year-old father with a knife after he refused to let her finish his potato salad ….. FLORIDA (https://goo.gl/p1qQb6)

Couple Gets Married At The Dunkin' Drive-Thru Where They Met
https://www.sunnyskyz.com/good-news/4018/Couple-Gets-Married-At-The-Dunkin-039-Drive-Thru-Where-They-Met