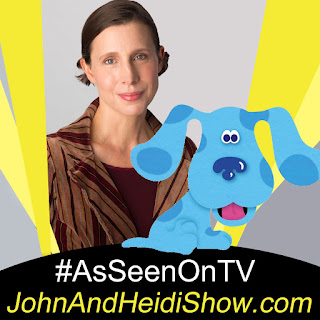 Today we visit with Emmy Award winner Tracey Paige Johnson, the co-creator of Blue’s Clues and the spin-off Blue’s Clues & You (she’s even the voice of Blue!) http://www.nickjr.com/blues-clues-and-you/

Nickelodeon is partnering with national nonprofit organization Baby2Baby this holiday season for the first-ever Blue’s Clues & You! “Blue Friday,” dedicated to celebrating families, on Friday, Nov. 20. In honor of “Blue Friday,” Nickelodeon will make a donation to Baby2Baby to support their mission of helping kids and families who need it most. The net will also premiere all-new Blue’s Clues & You! episodes filled with family fun, featuring Josh’s (Josh Dela Cruz) “Lola,” his grandmother (Carolyn Fe), and his cousins Steve (Steve Burns) and Joe (Donovan Patton). https://baby2baby.org/

A new study found that people who regularly eat spicy foods like chili peppers have a lower risk of dying early. (https://bit.ly/38qm0Pq)

A new survey finds one in three Americans currently have a crack in their phone’s screen. And according to the poll, the average American drops their phone on the ground four times every week.

The unfortunate places people said they dropped their phone:

A 51-year-old man has been arrested for allegedly spiking his date’s drink as she used a restaurant bathroom. Peel Regional Police said 51-year-old Tariq Nawaz dined with an unnamed woman at the eatery in Mississauga, Ontario on October 21st. After the woman left to go to the bathroom, police allege a waitress saw Nawaz spike her drink. The waitress told the woman about the alleged incident. Police claim Nawaz then fled the restaurant in his 2016 Porsche with personalized number plates. Peel Regional Police have since arrested Nawaz and charged him with administering a noxious substance and breach of recognizance. Nawaz has since been released, though he is set to appear in court on January 8th. (https://yhoo.it/2Io3SLE)

An off-duty NYPD cop shot a man who attempted to carjack him in Brooklyn. Many people are impressed with how cool he was under pressure.(https://bit.ly/2UgA5GK)

Doctors at USC Hospital in Los Angeles were able to perform a successful heart transplant even after the Medivac helicopter crashed on the roof and a man carrying the organ tripped and fumbled it. The helicopter wound up on its side, but nobody was hurt. They didn't release the pilot's name. (https://bit.ly/3eIRbqo)

A beloved cat named Marty who comforted visitors at the summit of Mount Washington in New Hampshire has died from an unforeseen illness. (https://bit.ly/35fYcf4)

A passenger on the first Caribbean Cruise since March has contracted the Coronavirus. (https://bit.ly/3krCold)

A video of a giant manatee floating in a Florida yard after Tropical Storm Eta flooded several neighborhoods has gone viral. (https://bit.ly/336Rk2r)

A TikTok video of a New York City performance artist who’s been riding the subway in a giant rat mask has gone viral. The character is known as Buddy The Rat. (https://bit.ly/35xvgiW)

A video of a kookaburra bird swooping in and stealing an Australian man’s sausage at a campground has gone vira. (https://bit.ly/32NkWRW)

The turkey may seem like a dumb animal, but it can hear and see better than the human.

An Argentinian cyclist was briefly hospitalized after falling off his bike and landing in a cactus. He’s suing the city because he hit a massive pothole that forced him to fly into the cactus. (http://dailym.ai/2IvbSue)

How’s this for a parenting lesson? An elementary school in France had to ban late-arriving parents from hurling their kids over its closed gate when dropping them off. Principal Sanaa Meziane explained that some tardy moms and dads “were literally throwing their children” over the six-foot fence outside the Trillade school in Avignon. “It hasn’t happened that many times, but as little as it happened, we preferred to get ahead of it,” Meziane said, adding she believed it was just a matter of time before a child was hurt. Educators put up posters at the school’s entrance depicting an adult throwing a kid over a fence with the words “Attention Danger.” “I do not throw my children over the gate!” the notice reads. The sign also includes instructions to parents who arrive after the 8:30 a.m. bell to come back at 10:00 a.m. or 3:00 p.m. when the gates are reopened.(https://bit.ly/32D0h2V)

The Wisconsin State Patrol had some advice for a guy who tried to transport a snowmobile by strapping it to the roof of his car: Bad idea. A trooper pulled over the driver on Highway 63 in northwestern Wisconsin on Sunday afternoon after seeing the snowmobile perched sideways on top of a Toyota Corolla. The Wisconsin Department of Transportation tweeted a photo of the car with the Polaris topper with the message: “Folks, don't try this at home.” The 23-year-old driver was given a warning about the unsafe hauling technique and cited for failing to buckle up. The driver, Matthew Schmit, of Clayton, told the trooper he had just bought the snowmobile and was driving it over to a friend’s house. “I know it looks sketchy, but we had it strapped down and shook it,” he said.(https://fxn.ws/3njJSsl)