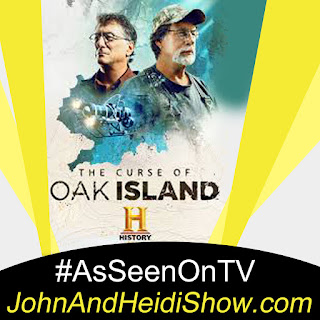 Today we visit with Rick & Marty Lagina from History Channel’s The Curse of Oak Island. Located off the south shore of Nova Scotia, Oak Island has intrigued adventurers for more than 200 years as it’s believed to be hiding one of the greatest treasures of all time. Though no one has been able to find it, Rick & Marty Lagina – two brothers from Michigan – believe they can solve the 225-year-old mystery. The popular, long-running series The Curse of Oak Island – now in its eighth season – has followed their long and dangerous search (several people have died trying to strike it rich on Oak Island). As they get ever closer, using modern technology to forge new discoveries, the Laginas hope to find the treasure before they run out of money -- or worse.
https://www.history.com/shows/the-curse-of-oak-island-drilling-down

A study found that people who regularly get a good night's sleep lower their risk of heart failure by 42%. (http://dailym.ai/3pAP0dh)

A new study found that a British arthritis drug may cut deaths in hospitalized COVID-19 patients by two thirds. (http://dailym.ai/3lDVxBB)

A cat detained at Sri Lanka's main prison while allegedly trying to smuggle drugs and cell phone SIM cards has escaped. A police official said that the feline was detected by jail intelligence officials on Saturday at the high-security Welikada Prison. He said nearly two grams of heroin, two SIM cards and a memory chip were found in a small plastic bag tied around the cat's neck. But the Aruna newspaper said that it escaped on Sunday from a prison room where it was kept. Sri Lanka is battling a major drug problem with some anti-narcotics detectives also implicated in selling confiscated drugs. Police last week seized an eagle allegedly used by drug traffickers to distribute narcotics in a suburb of Colombo. (https://yhoo.it/3pmi7B9)

A super-fan of the movie “Alien” has created a $13,000 replica of the space ship inside his apartment in Spain. (https://bit.ly/2UkgKoo)

A 42-pound cat that went viral after appearing on the cover of the New York Post in 2019 has lost 20-pounds and now weighs a trimmed down 22-pounds. (https://bit.ly/3pwkgdD)

A New Mexico woman was arrested for killing her grandfather with a lethal drug injection and then stuffing his body in a tool chest. (https://fxn.ws/3pdchC4)

Three New York City transit cops saved a teenage boy on Tuesday who had threatened to jump off the RFK Bridge on Snapchat. (https://bit.ly/35m2LVk)

A Georgia woman was arrested after she posed as an FBI Agent and tried to get free food at Chik-Fil-A. The woman arrived at the restaurant in a white van and claimed to be with the FBI before demanding free chicken. (https://bit.ly/3eOVu3r)

A study finds more than 9 out of 10 one dollar bills carry bacteria.

Russia has unveiled a self-driving delivery truck that uses facial recognition to stop automatically when it sees a pedestrian in the road. (https://bit.ly/35addPE)

He really wanted that new Xbox, but he got arrested instead. 24-year-old Zoser Muhammad allegedly punched a 36-year-old man in the face at an East Harlem, New York GameStop, where devoted video gamers had lined up to purchase the new Xbox Series X game system, and then was caught with a fake Glock handgun. The mini-drama went down at the Gamestop on 3rd Avenue near East 105th St. about noon on Tuesday. The victim, who was in line ahead of Muhammad and a female friend, went into the store and bought the gaming system. On his way out, Muhammad slammed him in the right cheek, causing pain and bruises. Muhammad, who lives nearby the store, ran off, dropping his backpack. His friend picked it up and cops confiscated it. They found the replica Glock handgun inside. Later, Muhammad showed up at the 23rd Precinct stationhouse to retrieve his backpack. He was arrested there for assault and weapon possession. (https://bit.ly/3knO1cE)


MOMENT OF DUH: Brought to you by TimeForRehab.com

According to the Orange County Sheriff’s Office, video shows a Florida man pointing a bright green laser light directly at a helicopter pilot. Deputies said that footage from the department’s Chase 2 helicopter shows 32-year-old Jason Ogle standing outside a home Friday night and pointing the laser directly into the sky. The neon beam was strong and bright enough for the pilot to pinpoint Ogle’s location and direct deputies on the ground to him. Deputies said Ogle still had the laser in his hand when they approached but quickly moved back toward the door of the home and threw something inside before he was taken into custody. According to the affidavit, Ogle made comments about shining the laser into the sky but refused to answer further comments. Deputies said the pilot was required to seek medical treatment due to the repeated strikes to his eyes. Ogle is facing a charge of pointing a laser light at a driver or pilot.(https://bit.ly/3ltKBXs)

A security guard was fired after uploading videos of his farts to Instagram ….. FLORIDA (https://goo.gl/YNxgP6)