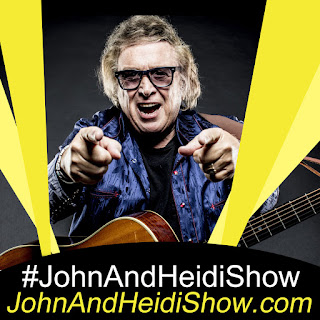 Today we visit with LIVING LEGEND Don McLean. His hit song American Pie was the #5 song of the last 100 years! He has now teamed up with Time Life to release EVERY SONG on a YouTube channel for free. https://www.youtube.com/channel/UC8211Zt_HQJWDD0Bj6cenQw

A study found that babies born in the summer grow up to be healthier adults.

A Marketplace survey found that the pin pad on the Grocery Store checkout line is the most germ infested place in the Super Market. (https://bit.ly/3kRloG6)

A Littleton woman allegedly impersonated a Hillsborough County prosecutor when she filed bogus documents with court officials declaring that the drug possession and stalking case against her had been dropped. 33-year-old Lisa Landon faces one charge of false personation and six charges of falsifying physical evidence, according to Hillsborough County grand jury indictments handed up earlier this month. The indictments allege that Landon submitted the fake documents in three different court cases last November and December. In several instances, she used the New Hampshire court system’s electronic system to file documents. Landon’s history includes criminal charges in Manchester related to stalking and possession of methamphetamine. The grand jury also returned indictments of burglary and theft against Landon. (https://bit.ly/3oA5SAB)

Jennifer Lawrence says she confronted Anderson Cooper for claiming she faked her famous fall at the Oscars in 2013. (https://bit.ly/35zOJyi)

Lori Loughlin will be isolated from other prisoners during her first two weeks in jail because of Coronavirus concerns. (https://bit.ly/3jL52x5)

The City of Newark, New Jersey has reinstated a curfew for non-essential businesses in an attempt to slow the spread of the Coronavirus. (https://bit.ly/3jFuzYQ)

A rare two-headed snake was discovered by a family’s cat in Florida. (https://bit.ly/35HvdzZ)

A wild brawl broke out on a Spirit Airlines flight from New Jersey to Puerto Rico after a woman refused to wear a mask. (http://dailym.ai/2GaxYB6)

A North Carolina Pastor was arrested for peeing on a female passenger during a Delta Flight from Las Vegas to Detroit. (https://bit.ly/37LtvQJ)

A Michigan couple was arrested for stealing $2.5 million in government relief funds after bragging about the fancy clothes and jewelry they bought on social media. (https://bit.ly/3msgb7Q)

The first oranges weren’t orange. The original oranges from Southeast Asia were a tangerine-pomelo hybrid, and they were actually green. In fact, oranges in warmer regions like Vietnam and Thailand still stay green through maturity.

A mixed breed Italian puppy that was born with bright green fur has been nicknamed Pistachio. (https://tmsnrt.rs/3dPybpC)

A woman attempting to elaborately dine and dash from a Burnaby, British Columbia restaurant found herself in an embarrassing situation instead. A newly-released video by Burnaby RCMP shows the woman attempting to leave without paying her bill by crawling into the ceiling vent in the women’s washroom. Police said the manager of the unnamed restaurant called them, and when officers arrived, they went to the kitchen as the woman could be heard crawling above the ceiling tiles there. She didn’t make it much further and fell through the ceiling, right into the path of an officer who then arrested her. Police said the woman did not require further medical attention and the restaurant did not press criminal charges after taking into account her “life circumstances and struggles.” Police released this video Thursday as part of their ongoing series about officers on the front lines. (https://bit.ly/34HJRb6)

A Georgia woman accused of attempting to hide a loaded firearm in some plants outside a Disney World theme park told deputies her 6-year-old was actually the one who put it there. However, video and witness statements showed otherwise. The October 8th incident happened when an AdventHealth worker checking temperatures before guests entered Magic Kingdom at the ticket and transportation center notified security after seeing a woman take something from a stroller and place it behind some plants near the tents before the security checkpoint. The woman then proceeded through the metal detector into the park. Security alerted an Orange County Sheriff’s deputy who looked inside the purse near the planter and immediately recognized the butt of a firearm. Deputies said the firearm was a loaded 9mm. The firearm has ten bullets, including one in the chamber. Temple does not have a concealed weapon permit for Florida or Georgia. She was trespassed from Walt Disney World Property and taken to the Orange County Jail. (https://bit.ly/35VjcHo)

A Tampa Bay Stripper was charged with aggravated assault after she passed gas on a customer who refused to pay for a lap dance ….. FAKE NEWS