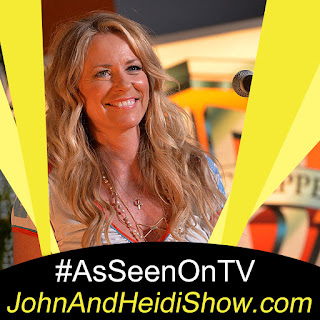 This weekend we visit with multi-platinum selling & Award-winning Country Music Icon Deana Carter. She is currently starring in 3rd installment of the popular UPtv A Very Country Christmas franchise, titled "A Very Country Christmas: Homecoming" Zane and Jeannette return from their magical honeymoon to plan the perfect first Christmas as a family, but the arrival of Jeannette's former father-in-law throws a wrench into all of their holiday planning. https://www.uptv.com/videos/a-very-country-christmas-homecoming-popping-the-paparazzi/

FORMER FILMS FROM THIS SERIES

A new study found that 60% of Americans fear they won't see their loved ones this holiday season. (https://bit.ly/2UCqhHi)

According to an arrest affidavit, a Florida mother forced her two-year-old son to smoke from a vaping device containing THC oil so that the child would “sleep and eat better. Investigators collared 22-year-old Kiarra Clarisse on a felony child neglect charge after her former girlfriend alerted the victim’s father about the vaping. The witness also reported that Clarisse had cancelled the boy’s medical appointments out of concern a doctor would discover THC in the child’s system. Clarisse was released from custody early this morning after posting $3,000 bond. She is scheduled for arraignment on December 15th. According to court records, Clarisse was convicted last year of drunk driving and placed on probation. (https://bit.ly/3nZKgg3)

Royal Insiders say Meghan Markle and Prince Harry are being pressured to drop their $100 million dollar Netflix deal over the smearing of Princess Diana on “The Crown.” (https://bit.ly/3kMHDvU)

Royal Insiders say season four of “The Crown” is not an accurate portrayal of the real family’s circumstances. (http://dailym.ai/3kYZQ9A)

A New Orleans Bed and Breakfast that allowed guests to stay in the nude is no longer clothing optional. (https://bit.ly/32Ug5i6)

Rats as big as bunnies are overtaking Central Park and roaming the streets of the Upper West Side in New York City. (https://bit.ly/3pOBT8C)

California police arrested a 12-year-old boy for prank calling 9-1-1 and provoking a response by the SWAT team after telling them his mother shot his father and was hiding with the gun. (https://bit.ly/3pJUC59)

A Gender Studies Student at the University of Illinois-Chicago was arrested for stalking her ex-boyfriend and shooting him dead. (https://bit.ly/3pGAnFw)

An Idaho woman was sentenced to a month in prison for having sex with two teenage boys. (https://bit.ly/35LHyV3)

The City of New Orleans has canceled Mardis Gras for 2021 due to a spike in Coronavirus cases. (https://bit.ly/3lMHWrR)

What is the relationship between these three groups of numbers: 147, 2580, and 369? Answer: They’re the columns of numbers on a telephone keypad.

A Brazilian company is selling a “Harry Potter Broomstick Scooter” that travels up to thirty-seven miles per hour. It sells for $740. (https://yhoo.it/3kH6iC1)

A 14-year-old Omaha boy was clocked driving 125-mph last Wednesday night while trying to evade a Nebraska State Patrol trooper in Omaha. The pursuit began at 9:10 p.m. when a trooper spotted a Nissan Altima traveling at 100-mph. The driver refused to pull over for a traffic stop and accelerated. The trooper reported that the Nissan was weaving through traffic, reaching speeds of 125 mph, the spokesman said. After the Nissan exited I-680 and headed west, the trooper performed a tactical intervention that brought the vehicle to a stop. The driver was taken into custody and booked into the Douglas County Youth Center. He was arrested on suspicion of felony flight to avoid arrest, felony willful reckless driving, operating a vehicle without a license, and other traffic violations. (https://bit.ly/3fkZ9q2)

A Florida man has been accused of contributing to the delinquency of his 8-year-old son after deputies say he had the kid tag along with him during a recent series of crimes. When 36-year-old Ernest McKnight III was asked by a detective why he had the child with him he replied, “I was trying to toughen him up. … I don’t want him to be soft,” Brian Bruchey, a spokesman for the Polk County Sheriff’s Office said. He said the boy was with McKnight last week when deputies say McKnight burglarized three unoccupied dwellings, stole a car, and made off with a package stolen from a porch. The alleged crimes all took place in the City of Lake Wales. An arrest affidavit says McKnight was arrested last Thursday after leading deputies on a high-speed chase after they spotted him in the stolen vehicle, a red Hyundai taken from a road surveyor. The affidavit quotes deputies as saying they clocked McKnight going 120-mph and that only after they caught up with him did they discover he was with a child.(https://fxn.ws/2IJ4QSH)

An Orlando woman told police she couldn’t get a DUI because her nine-year-old daughter was driving ….. FAKE NEWS