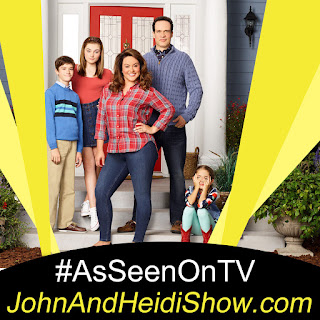 Today we visit with Diedrich Bader, You’ve seen him on The Drew Carey Show, Office Space, he Beverly Hillbillies, Napoleon Dynamite, Miss Congeniality 2, Balls of Fury, and Meet the Spartans and MANY MORE. He's back for another season of ABC’s American Housewife, where he plays Greg Otto. The season premier of American Housewife was Wednesday, October 28th at 8:30/7:30 CT on ABC TV.

While no country has a definite plan for a manned mission to Mars, some people think we’ve already been there. A survey found 7 percent of adults think man has already stepped foot on Mars.

A survey of adults reveals that the average person feels “perfectly healthy” less than half the year. The average adult enjoys just 12 days each month without suffering from any aches or pains. That equates to 144 days, or about 39% of the year.

Chinese police have arrested a man after he scattered a “heavenly rain of banknotes” on commuters from his apartment window while allegedly high on methamphetamine. Police said the 29-year-old was “in a trance” after taking drugs at his home on the 30th floor of a building when he began throwing cash out of the window to the streets below. Local media reported the “heavenly rain of banknotes from the sky”, and a video of the October 17th incident has been viewed more than half a million times. The footage shows traffic slowed to a crawl, or completely stopped in some sections, as dozens of people left their cars or walked onto the busy road to catch the banknotes. Police were called and the man was taken into custody. The police said in a statement he had been detained for taking drugs and was under investigation and receiving treatment.(https://bit.ly/3jJnxlR)

The LAPD is looking for a group of thieves who burglarized the set of the Conan O’Brien Show. A surveillance video showed that one man appeared to be cut and bruised. (https://fxn.ws/2HwnBIF)

Fox News has been hit with a mild Coronavirus outbreak that has several top executives quarantining. (https://bit.ly/3jwW8Dp)

Buzzfeed is cutting $30 million in operating expenses in an attempt to break even for the first time ever. (https://on.wsj.com/3e1dreI)

A Florida man was mauled by a leopard after paying for a full contact experience with the cat. (https://bit.ly/3eadNQ4)

A wildlife expert posed as an elderly woman in order to trap an aggressive turkey that’s been attacking people on the streets of Oakland.(https://bit.ly/2Tr09i7)

A guy in Iran was so unhappy with a parking ticket he doused his car in gasoline and set it ablaze.

Prince William surprised some unsuspecting patrons getting their fast food fix at a London KFC on Tuesday. The Duke of Cambridge was on his way to an event with his wife, Kate Middleton, and walked past the fried chicken outlet. William spoke through the glass to a woman sitting in a window seat of the store. The Duke appeared to make a quip, leaving the woman laughing at her royal encounter. https://twitter.com/KFC_UKI/status/1318547339573940225

When you show up late, people assume you’re disorganized, inconsiderate, and kind of flaky. Whatever the reason for your tardiness, these are the knee-jerk judgements that run through a person’s mind when you’re tardy. If you want to make a good impression, there’s one simple thing you can do that makes a huge difference: show up to every commitment five minutes early. Entrepreneur magazine says being on time is more than just a habit: it’s a character trait. As quick to judge as people are about tardiness, they’ll have the same snap judgements when you’re early, only those judgements are positive ones: you’re organized, determined, dependable — and all you had to do is show up a few minutes early.

Though many people look forward to retirement as an absolute end to their working days, research shows that people who transition to temporary or part-time work after retiring often experience better health. Psychologists looked at data from more than 12,000 people between the ages of 51 and 61 at the beginning of the study. The participants were interviewed every two years over a six-year period about their health, finances, and employment or retirement life. The researchers found that people who worked after retiring — be it part time work, self-employment or a temporary job — were less likely to suffer from major health conditions including cancer, high blood pressure, and cardiovascular disease, compared to retirees who stopped working completely.

A cow-bison hybrid is called a “beefalo”. You can even buy its meat in at least 21 states.

Prince Andrew is plotting a royal comeback after a secret meeting with the Queen. (https://bit.ly/2TIlDHr)

Deputies in Anderson County, Tennessee didn’t need to dust for prints while investigating a recent theft after a severed finger was found at the crime scene. A stolen log splitter in the Marlow Community was reported to the Anderson County Sheriff’s Office last Thursday. A severed finger, a cell phone, tools, and other items were also reported to be found on the victim’s property. Detectives found Hugh Seeber was dropped off at Methodist Medical Center with a missing finger. The 50-year-old was then taken to UT Medical Center in Knoxville. Anderson County Detective Sean Flynn met him there, bringing the severed finger with him. Seeber was charged with felony theft of property. (https://bit.ly/31GGcsk)

A Facebook Live broadcast of a rap video being produced on Jacksonville’s Westside led to the arrest of five men on weapons charges. Arrest reports from the Jacksonville Sherriff’s Office show that investigators were alerted to live feeds on social media of the video, which was being filmed in a cul-de-sac on Indian Lakes Drive. Multiple police units converged on the location and detained several men who police said were seen flashing guns in the video. A video posted by Duval Promo shows dozens of JSO patrol cars in the neighborhood and one man being led away in handcuffs. According to the Sheriff’s Office, five handguns and an assault rifle -- all loaded -- were confiscated at the scene. The report said that Officers made a recording of the rap video for evidence and alerted the Gangs Unit to the arrest. (https://bit.ly/2J0NDUw)

A Florida man was arrested for calling 9-1-1 and telling them that he saw aliens flying low to the ground. (https://bit.ly/2HXMg8V)

This Restaurant Owner Is Using The Pandemic Downtime To Fly Animals To Safety
https://www.sunnyskyz.com/good-news/4009/This-Restaurant-Owner-Is-Using-The-Pandemic-Downtime-To-Fly-Animals-To-Safety